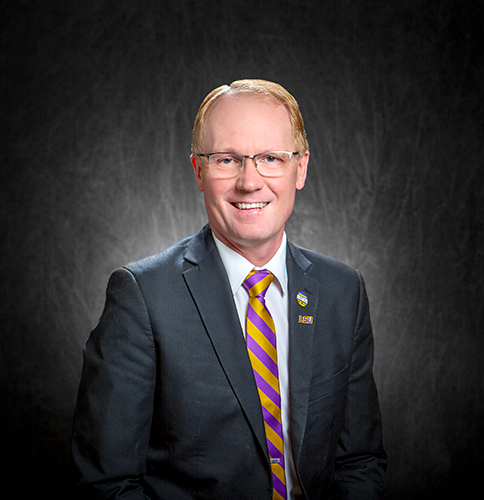 Roy Haggerty serves as LSU’s executive vice president & provost (EVPP) and holds an appointment as professor of geology. Haggerty serves as the chief operating officer and chief academic officer for the LSU A&M campus. As EVPP, he supports and facilitates the academic enterprise of the system campuses, especially serving as the primary interface for the LSU Board of Supervisors and other regulatory bodies. The responsibilities of the EVPP include the articulation of an academic vision, leadership in academic strategic planning, development and administration of academic budgets, and academic guidance for the capital campaign. All instructional, student support, enrollment management, and research at the flagship institution fall under his executive oversight. As EVPP, Haggerty reports directly to the LSU president, who serves as the chief executive officer of the flagship institution, as well as the statewide system. In addition, Haggerty works in tandem with the executive vice president for finance and administration and CFO to prepare and monitor the operating budget.

Haggerty served in several leadership roles while at Oregon State University including geology program head, water resources science program head, interim dean of the College of Earth, Ocean, and Atmospheric Sciences, associate vice president for research, and dean of the College of Science. During his tenure as dean, research funding grew by 50 percent, and online enrollment for the college increased by 100 percent. Under his leadership, the College of Science implemented its first diversity action plan . In addition, he co-founded a university-wide student mentoring program, increasing retention by 7.9 percent among participants. At the outset of the coronavirus pandemic, Haggerty co-founded a statewide testing program called TRACE, which tested approximately 80,000 people, and for which Haggerty and the other co-founders were awarded OSU’s highest honor, the Beaver Champion, in 2020.

In 1996, Haggerty served as an assistant professor at Oregon State University, where he spent the next 26 years of his career. Ultimately promoted to professor in 2009, Haggerty’s most notable academic accomplishment is the 2008 publication and discovery of the world’s first, “smart tracer.”  A molecule that moves with water, the smart tracer senses and records valuable information about the environment throughout the process. Soon after, Haggerty was named a fellow of the Geological Society of America in 2014. In total, Haggerty has led research projects totaling $9 million and published 75 peer-reviewed articles, predominantly in hydrology and continues to serve as a trustee for the Oregon Museum of Science and Industry.

Haggerty earned a Bachelor of Science with first class honors from the University of Alberta, Master of Science and Ph.D. in hydrogeology from Stanford University. A native to the rural farmland of Alberta, Canada, Haggerty was the first in his family to attend and graduate from a postsecondary institution. Coincidentally, the hometown where Haggerty was born and where much of his family still lives and farms, is Provost. It was during those formative years that Haggerty cultivated an interest and curiosity for life and the universe which further propelled his pursuit of knowledge.

Louisiana State University Agricultural & Mechanical College is the state’s flagship university and is one of twenty-four universities nationwide holding land-grant, sea-grant, and space-grant designations. LSU has a population of over 35,000 students and more than 330 academic programs of study. According to a study by the Economics & Policy Research Group at the E. J. Ourso College of Business, LSU has a $5.1 billion-dollar economic impact in the state of Louisiana.