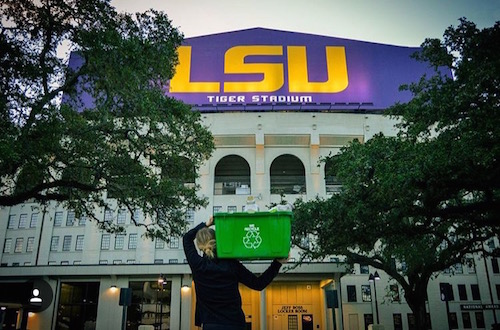 We are excited to announce that LSU Campus Sustainability has received an Environmental Leadership Program Award from the Louisiana Department of Environmental Quality (LDEQ) in the Pollution Prevention category.  The award specifically recognizes LSU’s first place win in the 2015 GameDay Recycling Challenge, which is a friendly competition for colleges and universities to promote waste reduction at their football games. LSU placed first in the nation in total tons recycled in any one football game, for the LSU vs. Arkansas game.

LSU led the nation in total recycling with 86,400 lbs. LSU also led the Southeastern Conference in tons recycled per capita.  In order to achieve this, Campus Sustainability coordinated an aggressive recycling marketing campaign for the football game, as well as a “get Caught Green Handed” competition for game-goers to take photos of themselves recycling for a chance to win a football signed by Les Miles.  Campus Sustainability also coordinated a large volunteer event following the game, focusing on recycling litter left after tailgating events on the Parade Grounds and other areas.  The GameDay Recycling Challenge is sponsored and promoted by the Environmental Protection Agency (EPA) Waste Wise program, Keep America Beautiful (KAB), RecycleMania, and the College & University Recycling Coalition (CURC).