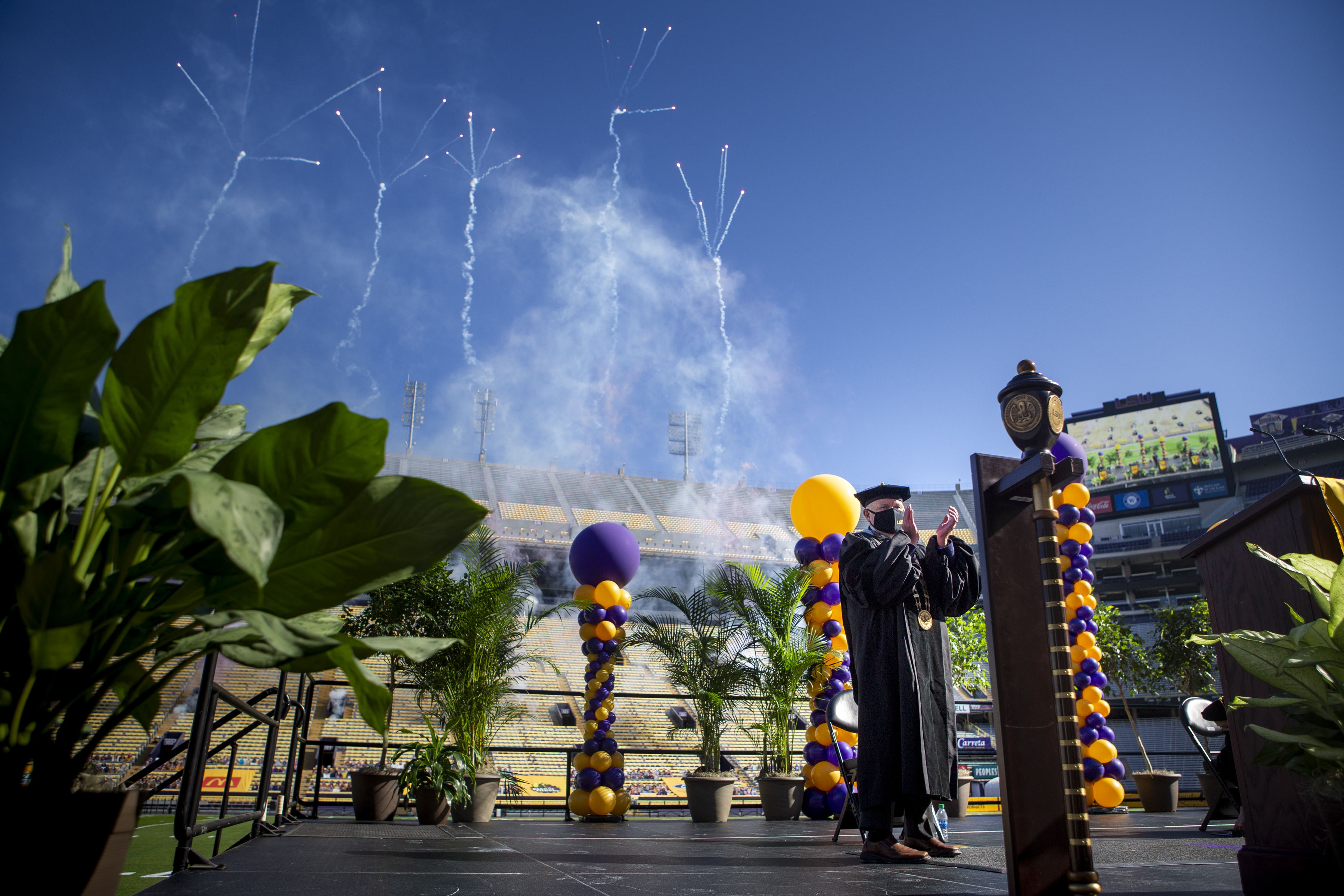 12/18/2020
BATON ROUGE – Following one of the most unique fall semesters ever held at LSU, the university held its most unique commencement ceremony on Friday, Dec. 18. For only the third time in LSU history, graduation took place in Tiger Stadium, where 1,966 degrees were conferred on fall 2020 graduates.

“Right now, in this very moment, we are taking part in only the third commencement ceremony to ever occur in Tiger Stadium. Only the second — out of 303!” said Interim LSU President Tom Galligan, who delivered the keynote address. “Which means that fewer than 1 percent of all graduating classes have had the great privilege of having their commencement held inside this most hallowed space.”

In addition to the in-person ceremony at Tiger Stadium, LSU had a virtual ceremony later in the day for those who couldn’t attend the morning event with all the graduates names displayed on the scoreboards in Tiger Stadium.

“We’re really here! We made it,” Galligan said. “Wait, let me correct myself: Louisiana State University graduates of 2020 — you have made it!”

Galligan told the graduates how proud he was of them for persevering through this difficult year as they finished their degrees, but reminded them that terrible times are terrific teachers. 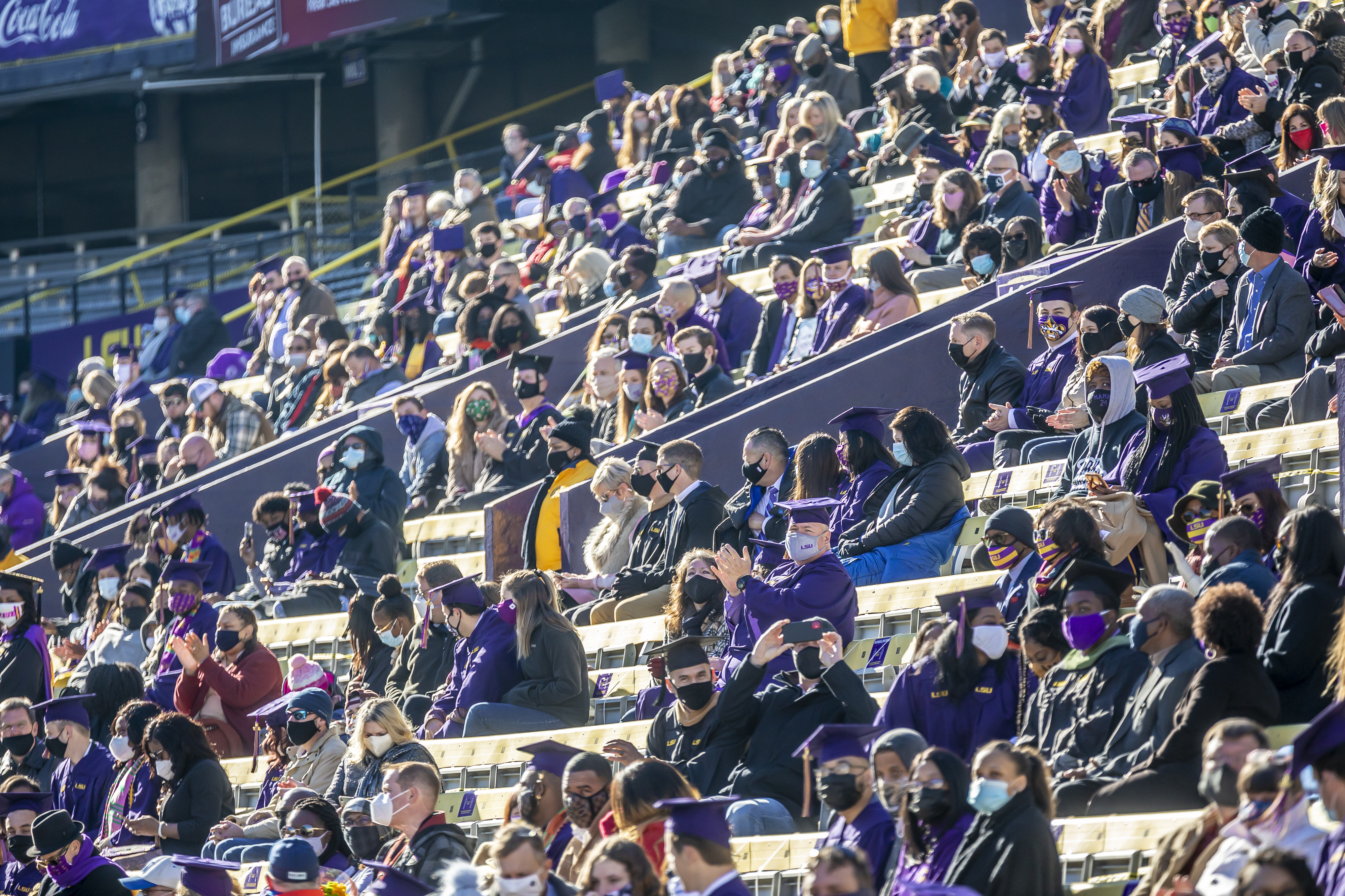 “The experience of confronting a great challenge in life and digging deep within yourself to overcome it provides you with invaluable knowledge and perspective that cannot be obtained in any classroom,” he said.

Galligan told the class that this year they showed tremendous character, ability and heart, and that they have what it takes to accomplish anything they set out to do in life.

Galligan encouraged the graduates not to focus too much on the future and be able to instead be present and cherish even the small moments. He shared the event in his life that taught him and his family how precious each second of every day truly is.

In October 2018, Galligan’s daughter, Aisling, was diagnosed with a very aggressive and rare form of non-small cell lung cancer. Her battle with cancer ultimately ended in August 2019. Galligan told the graduates about how they enjoyed every moment they had with Aisling and wanted even the small moments to be as long and slow in passing as possible.

“For those of you who have lost family members or loved ones, you know those wounds don’t ever really fully heal, and you don’t want them too,” he said. “The loss will always hurt, but you know our loved ones don’t ever really leave us. We carry their spirit in our heart everywhere we go for the rest of our days. And, in doing so, we enrich both the moment in which we are currently living and the moments we have lived through.” 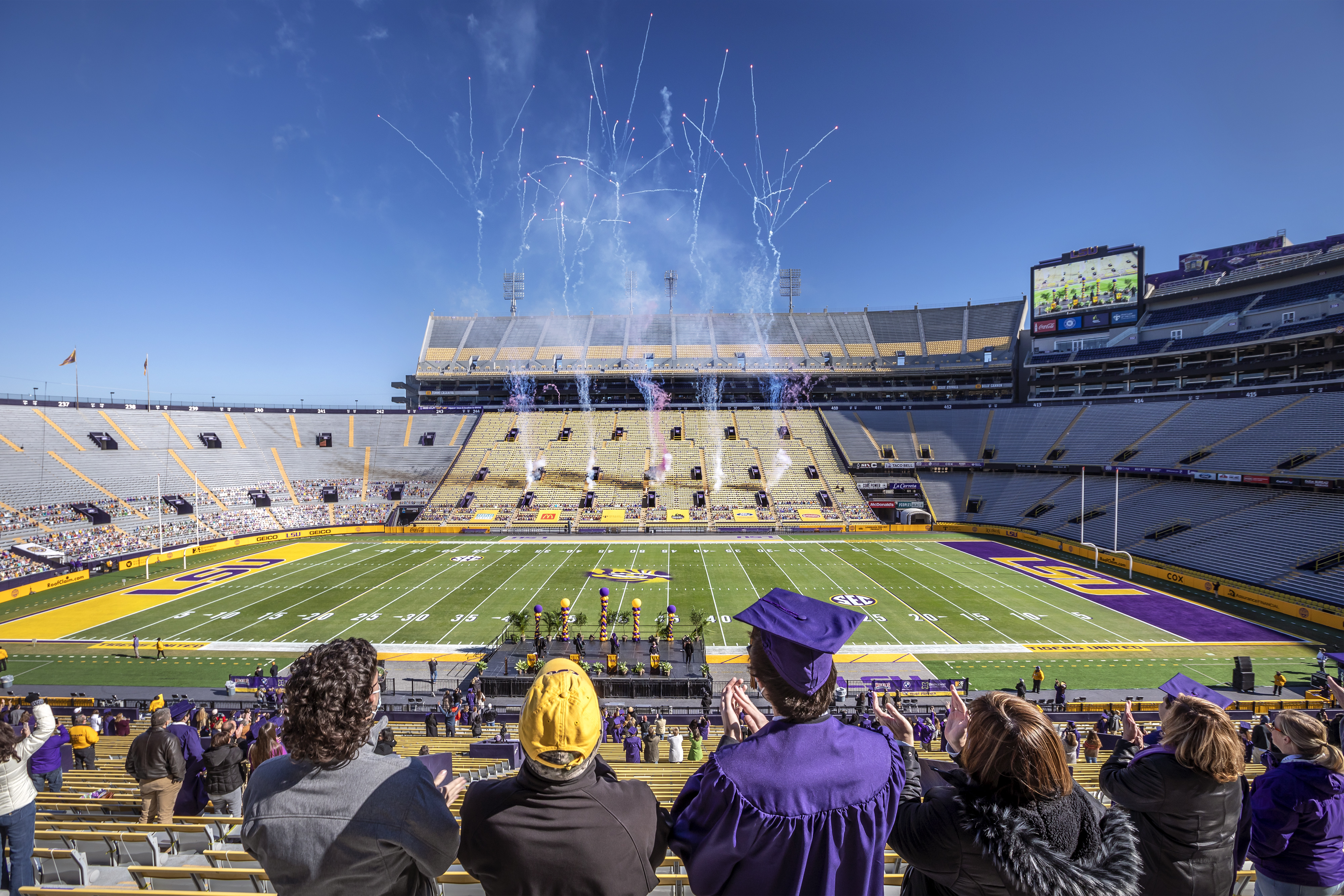 Galligan added, “So let’s be present in this incredible moment that we’re so fortunate to be celebrating now — let us together cherish this wonderful day and every minute of everyday to come.”

“The class of 2020 is truly unique. There is no other way to put it … these graduates have persevered and faced first of their kind challenges throughout their academic careers,” said LSU Executive Vice President & Provost Stacia Haynie. “This class has shown that with grit, tenacity and dedication, there is nothing that Tiger can’t do.”

One-hundred and fifty-one students graduated with honors, including 18 students who received the University Medal for graduating with the highest undergraduate grade-point average in the class.

The Center for Community Engagement, Learning, and Leadership, or CCELL, in conjunction with LSU Campus Life, announced that eight students graduated with the Engaged Citizen distinction for fall 2020. Collectively, these students have earned 69 service-learning credit hours and have volunteered approximately 700 hours across their local and global communities during their academic tenure at LSU. Some of this cohort’s volunteer opportunities include Read Across America, Knock Knock Children’s Museum, and local Baton Rouge hospitals. One student also served abroad on an international mission trip to San Ignacio, Belize.

Twenty-two student athletes were honored virtually at the annual “Tribute,” a ceremony where each graduate is presented with their special student-athlete graduate stole.

Media Note:
Lists of graduates and honor graduates are posted on LSU’s commencement website, www.lsu.edu/commencement. The lists include graduates who have authorized the release of their names. In addition, videos from LSU’s virtual celebration are available on the university’s YouTube page, www.youtube.com/lsu.