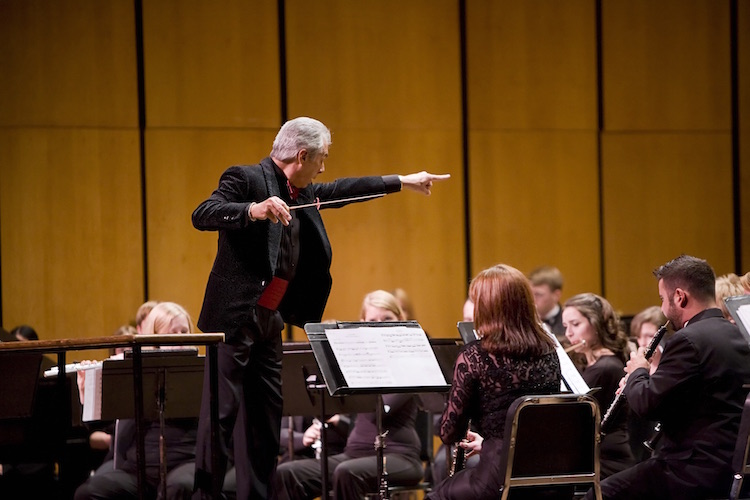 Bill Conti during a fall 2019 visit to LSU to conduct the LSU Symphony Orchestra in a special concert celebrating his 50-year career of film and television scoring.
Photo: LSU Strategic Communications

06/30/2020
BATON ROUGE – LSU College of Music & Dramatic Arts alumnus William “Bill” Conti and his wife, LSU alumna Shelby Cox Conti, of Los Angeles, are giving their alma mater one of the university’s biggest in-kind gifts in history: the original scores from Bill’s prolific career as a composer and conductor.

The William and Shelby Conti Papers, to be held in LSU Libraries’ Special Collections, include Bill’s well-known scores from “The Right Stuff,” for which he won an Academy Award for Best Original Score, and from the “Rocky” film series, the “Karate Kid” film series, the film “For Your Eyes Only” and the television series “Dynasty.” By giving these scores, the Contis will enable aspiring musicians at LSU—as Bill once was—to learn from the iconic works while ensuring their preservation in the long term.

LSU College of Music & Dramatic Arts Dean Todd Queen said, “We are proud to be stewards of the life’s work of one of our own graduates and honored to have been part of Bill’s remarkable journey as a musician. His and Shelby’s generosity will make Bill’s renowned scores accessible to our students, faculty and staff, strengthening our programs in musicology and music theory. We are deeply grateful to Bill and Shelby for recognizing the potential of this gift. They are directly investing in our efforts to prepare and inspire future musicians to help people lead richer lives through music.”

Bill graduated in 1963 from LSU’s School of Music and then earned a master’s degree with honors from the Juilliard School of Music. His career, which has spanned film and television and a record 19 times serving as musical director at the Academy Awards, has been recognized through nominations for three Academy Awards, three Golden Globes and 13 Emmy Awards. He earned five Emmy Awards for Outstanding Musical Direction for Academy Award ceremonies, received an Honorary Doctor of Music from LSU in 1985, and was inducted into the Louisiana Music Hall of Fame in 2008. As a high school senior at North Miami Senior High School, Bill received the Miami Herald Media Company’s prestigious Silver Knight Award; fellow recipients of this award have included leaders of Fortune 50 companies and top government officials. 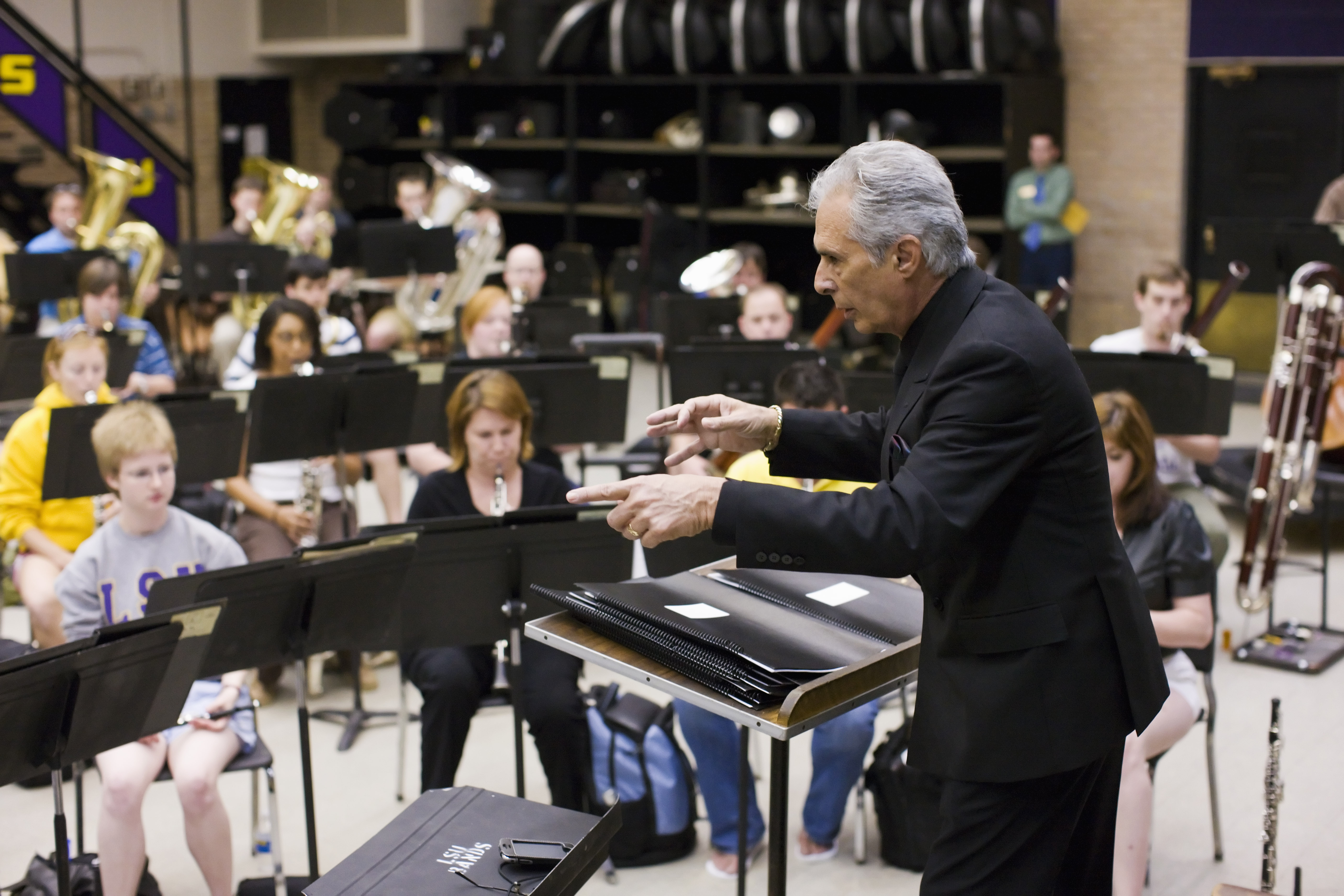 Bill reflected, “My father was a musician. My grandfather was a musician. It was a part of my life forever. It wasn’t special; it was like breathing. I began at 14 years old in Miami Beach, playing in nightclubs. LSU must have had a great reputation, because why would a high school music teacher recommend Louisiana State University to me in 1959?”

Bill soon drove to LSU with his family and became involved with Tiger Band, playing the piccolo and becoming intrigued by the halftime shows.

As piano player for the LSU Ballet Corps (now known as Golden Girls) auditions, he met Shelby Cox, now his wife of more than 50 years. He and Shelby have two daughters and five grandchildren, including a granddaughter who is pursuing a Bachelor of Arts through the College of Music & Dramatic Arts’ School of Music, from which Bill earned his LSU degree nearly 60 years ago.

Bill visited LSU in fall 2019 and shared the journey of his experience on campus and his career, saying, “I think all of that stuff really began here. I was in the center of the orchestra playing the bassoon. I was making halftime shows and picking up capes in Tiger Stadium. You can do music out of this school at the level of the highest music schools in this country. It’s a fact.”

“Bill’s compositions have enhanced audiences’ experiences with film and TV for decades,” said LSU Libraries Dean Stanley Wilder. “Now, with the addition of his original scores to the LSU Libraries’ Special Collections, Bill and Shelby will enhance LSU’s role in preserving our shared culture for generations to come.”

Gifts like the Contis’ most recent investment in LSU advance the university’s commitment to arts and culture—essential elements of a well-rounded education and a purposeful life. Watch “Oscar-winning Tiger Bill Conti Gives Back” for more of Bill’s reflections on LSU’s impact on his exemplary career.

Writing the Theme to Rocky

Conti says every musician needs a hit, and his is “Gonna Fly Now,” also known as “Theme from ‘Rocky.’” The beloved sports film was nominated for 10 Academy Awards and won three, including Best Picture, and the song topped the Billboard Hot 100. Conti shares how he wrote the iconic song.

Writing the Theme to Dynasty

Conti also wrote the theme music for the ABC soap opera “Dynasty,” which aired in 1981, steadily rose in popularity, and became the top show in the U.S. by 1985. The series was nominated for a Golden Globe Award for Best TV Drama Series every year from 1981 through 1986, and it won in 1983. Conti shares his inspiration for the theme.

Conti received a bassoon scholarship from LSU, where he earned first chair bassoon in the orchestra and worked with Tiger Band and the Golden Girls, then known as the Ballet Corps. He shares an unforgettable memory from his orchestra days.