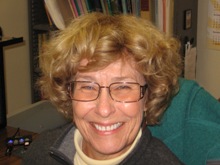 Professor Sirridge teaches primarily in ancient and medieval philosophy and in philosophy of art. She also teaches courses in philosophy and literature. Her principal area of research is logic, philosophy of language, and philosophical linguistics in ancient and medieval intellectual works. She has published, for example, a critical edition of Sermocinalis Scientia, a thirteenth-century work in philosophical linguistics wrongly attributed to Jordan of Saxony. She is currently engaged in editing the Abstractiones of Richard the Sophist, a thirteenth-century logician. She also works on Augustine’s philosophy of mind and philosophy of language and the medieval reception of Aristotle’s On the Soul. She is a member of the American Society of Aesthetics, the Medieval Academy, and the Society for Medieval and Renaissance Philosophy.