Ronald "Ron" Rodi was born and raised in New Orleans. He attended Louisiana State University and received his Bachelor of Science in Civil Engineering from the Department of Civil & Environmental Engineering in 1978. During this time at LSU, Mr. Rodi served a term as President of the ASCE Student Chapter, not realizing the future network he was building with the engineering community beyond the campus.

Upon graduation in 1978, Mr. Rodi remained in Baton Rouge. Not long thereafter, he landed the job of his dreams. As a young engineer, Mr. Rodi had the opportunity to work under the tutelage of C. Carter Brown, one of the pillars of the Louisiana engineering profession. The years Mr. Rodi spent there as an EIT and PE not only furthered his engineering skills but instilled in him a distinct sense of professionalism and business acumen. As icing on the cake, Brown & Butler frequently designed projects for LSU, and Mr. Rodi would soon be immersed in many small yet intriguing campus projects that would continue till this day. It was also during this time that Mr. Rodi became deeply engaged with the Louisiana Engineering Society. One of the former advisors to the ASCE Student Chapter, Jim Porter, recommended Mr. Rodi for the “highly esteemed” position on the public relations committee. Little did he realize that his initial commitment in this organization would lead to nearly 30 years of active involvement, including being honored as their 1984 Outstanding Young Engineer, presiding as State President for the Society’s Centennial and continuing to this day to serve as the State’s Society’s Legislative Chairman.

Shortly after Mr. Brown retired, Mr. Rodi resigned from Brown & Butler, and in 1985 began his private practice. The friendships he had made at LSU and the professional relationships he had built over his short career helped to sustain Mr. Rodi in the early years of his fledgling practice. Over the next few years, Mr. Rodi had a brief stint of civil engineering graduate courses, and served one semester as an Adjunct Instructor in the LSU CEE Department…. all at the time of trying to support a young family. Despite the sagging Louisiana economy, it was an exciting time, including the advent of personal computers, which enhanced the ability of young engineers to compete with the more established firms. Mr. Rodi became more invested in the Baton Rouge community during that period, particularly in the Greater Baton Rouge Chamber of Commerce serving for nearly five years on the Chamber’s Drainage Task Force. This experience reunited Mr. Rodi with his LSU hydrology professor, Raphael Kazmann. This forum and the opportunity to work side-by-side with Prof. Kazmann further instilled in Mr. Rodi that the sound practice of engineering requires both professional inquiry and scrutiny.

Twenty years ago, two young engineers decided to become partners. In 1988, Michael Songy (a 1979 LSU CE) and Mr. Rodi began Rodi & Songy Inc. From one employee to twenty in four years, they were both beginning to see the fruits of their joy and labor. Then in 1992, they took what most considered an unlikely venture…. Rodi & Songy merged with Chenevert-Soderberg Architects to become one of the area’s few jointly-owned A/E firms, CSRS. Today, the firm has grown to 65 full-time employees providing civil engineering, land surveying, architecture and program management to clients throughout Louisiana.

Mr. Rodi’s professional memberships include the Louisiana Engineering Society, of which he has had nearly 30 years of active service including serving as Baton Rouge Chapter President, State Private Practice Group Chairman, State President and State Legislative Chairman. He is also a member of the American Society of Civil Engineers, the American Water Works Association, the National Society of Professional Engineers and the Water Environment Federation. Mr. Rodi is a registered engineer in two states.

Throughout his career, Mr. Rodi has had the privilege and good fortune of working as both a consulting engineer and on a volunteer basis for LSU. His engineering experiences for the Baton Rouge campus and other institutions of the LSU System span nearly 30 years. For the past eight years, he has served on the College of Engineering Industrial Advisory Board and is currently serving on the Dean’s Advisory Council. On the departmental level, he is currently serving on the Civil & Environmental External Advisory Board and CEE Campaign Steering Committee. The former provides vital input to the Department regarding important developments in business and industry and gives suggestions for visibility, planning and function for the Department. The CEE Campaign Steering Committee, of which he is now heading, is responsible for planning to raise at least $4 million for the Department over the next four years as part of the Forever LSU Campaign.

Mr. Rodi’s active and committed involvement in the College of Engineering and the Department of Civil and Environmental Engineering here at LSU is an awesome evidence of his love for this university and his enthusiastic dedication to its continued success.

Mr. Rodi and wife Renee have two sons, James and Matthew and reside in Baton Rouge. Both are currently pursuing degrees at LSU. 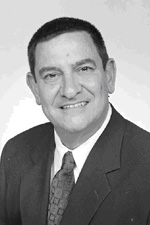