L. Lane Grigsby, a native of Louisiana, is Chairman of the Board of Cajun Contractors. Grigsby graduated with a BSCE degree from LSU in January 1967 after having transferred from the United States Military Academy at West Point. Initially, Grigsby went to work with Pyburn and Odom Consulting Engineers in Baton Rouge, but "decided that technical engineering didn't fit his personality." He joined Crown Builders as a field engineer in civil construction and progressed to Executive Vice President in 1970. Crown Builders was subsequently acquired by merger with a German engineering group and became Lurgi-Knost, Inc. Grigsby opened the east coast office of Lurgi-Knost in Jacksonville, FL, but returned to Baton Rouge as Manager of Purchasing until the firm dissolved in April 1973.

At that time, Grigsby started Cajun Contractors and Engineers, Inc., in partnership with Bob Mixon. Over the ensuing years, Cajun has grown to become one of the largest construction companies in Louisiana. Since 1990, Cajun Constructors has been listed among ENR's Top 400 Contractors.

Grigsby is founder and stockholder of the Atlantic Company of America, a nationally recognized historical restoration business that was responsible for the restoration of the Washington Monument. He is also the founder of the Mapp Construction, Inc., a commercial contractor based in Baton Rouge.

Grigsby has been active in the Associated Builders and Contractors having served in every elected position and twice received ABC's Man of the Year Award. He has also served in leadership roles in a variety of organizations including the Baton Rouge Chamber of Commerce; the Louisiana Association of Business and Industry (LABI); the Baton Rouge Metro Airport Commission; and the Medical Center Board of Directors. Since 1994, he has served on the Board of Directors of the Shaw Group, the 3rd largest EPC firm in the world. He has also been active in a variety of fund raising efforts to benefit LSU.

Grigsby is married to Bobbi Fickes and they have three children, Tami, Todd, and Tricia.

Mr. Grigsby was inducted as a member of the LSU Engineering Hall of Distinction in 1997. 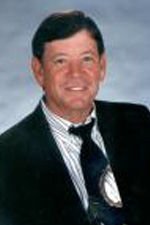