Born in Baton Rouge, Louisiana, moved to Opelousas, Louisiana, at age six where he attended elementary and high school. Graduated from what is now Opelousas Catholic in a pre-college curriculum. Extracurricular activities included football, basketball, track and student government. Mr. Graves lost his father as a junior in high school which necessitated his having to provide 100% of his college expenses. Having been inspired by President Kennedy’s challenge to put men on the moon, John was drawn to Aeronautical Engineering at LSU and enrolled as a freshman in the fall of 1959. Aeronautical Engineering was replaced by Civil Engineering as John believed he would not like the work environment for AE and might prefer more outdoors as offered by civil. Larry McKee gave John his first job in the engineering business as a rodman in a field survey crew. Maintaining a full time job while attending school he graduated from LSU in the spring of 1965 with a B.S. in Civil Engineering. With his sights set on being in the consulting engineering business John spent the next year or so taking selective, mostly graduate level course work in Business Administration.

Mr. Graves’ first regular full time job was with Edward E. Evans & Associates in 1968. Mr. Evans, a former LSU professor of structural engineering, founded the firm in 1953. John credits Mr. Evans as an excellent “teacher” from whom he learned a great deal beginning with structural work on the LSU Maravich Assembly Center. In the early 70’s believing that he had serious health problems, which he didn’t, Mr. Evans effectively turned over the day to day operation of the firm to John.

In 1986 Mr. Graves acquired full ownership of the firm at which time the name was changed to the current Evans-Graves Engineers, Inc. Mr. Graves has over 40 years’ experience in private consulting as a Civil Engineer, Surveyor and Administrator. Over 35 years of that period has been spent as a Principal of Evans-Graves Engineers, Inc., responsible for plan production and management of all phases of projects undertaken by the firm; from preliminary planning and feasibility studies, through final engineering design and construction. His work experience includes property and engineering assessments for site selection, project management, transportation planning and analysis, boundary and topographic site surveys, and civil site engineering. Mr. Graves has worked on a multitude of engineering projects for clients representing the petrochemical industry, national retail companies, industrial parks, recreational facilities, hospital and institutional complexes, residential development, utility companies, as well as local, state and federal government. Mr. Graves frequently serves as a court expert providing research and testimony in his field of expertise. 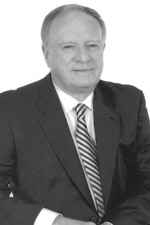