Since the late 1960s, the institute's physical oceanographic component has evolved rapidly into an internationally recognized effort. Initially focusing on the dynamics of the outflow of the Mississippi River into the Gulf of Mexico, this program has steadily expanded to include benchmark studies of the circulation in Louisiana bays and estuaries, the Louisiana Coastal Current, and aspects of circulation on the continental shelf and in the deep gulf. Initially, physical oceanographic studies were primarily supportive of the institute's geology program. Increased recognition for innovative research has brought in strong support for international programs. Physical oceanographic studies along the coasts of China, in the Mediterranean and Red Seas, in the Indonesia Archipelago, off Nicaragua, Ecuador, Papua New Guinea, Canada, and in the Arctic have all gained significant international visibility for the institute. More recently, institute personnel have broadened their interests to include the dynamics of marginal seas and linking sea straits, middle- and outer-shelf dynamics, and large-scale ocean-atmosphere interactions affecting weather and climate. Numerical modeling of coastal-to-basin scale circulation, including research on Loop Current eddy formation and the El Ni?o phenomenon, is a relatively new thrust for the institute.

These studies employ an impressive array of state-of-the-art technology including Acoustic Doppler Current Profiling, satellite tracked current drifters equipped with GPS positioning, moored salinity and temperature sensors, and satellite remote sensing of surface temperature, surface suspended sediment distribution, and circulation patterns. This is a vibrant program ranging from detailed studies of estuarine dynamics in the nearshore zone, to processes on the outer shelf and slope where the most exciting oil exploration and development activities are currently focused.

The institute specializes in:

Sea-surface height and geostrophic velocity vectors for 2/28/01. The X marks the location of the Deep Water Mooring funded by the Minerals Management Service. The PI��s are Masamichi Inoue, Susan Welsh, and Larry Rouse. 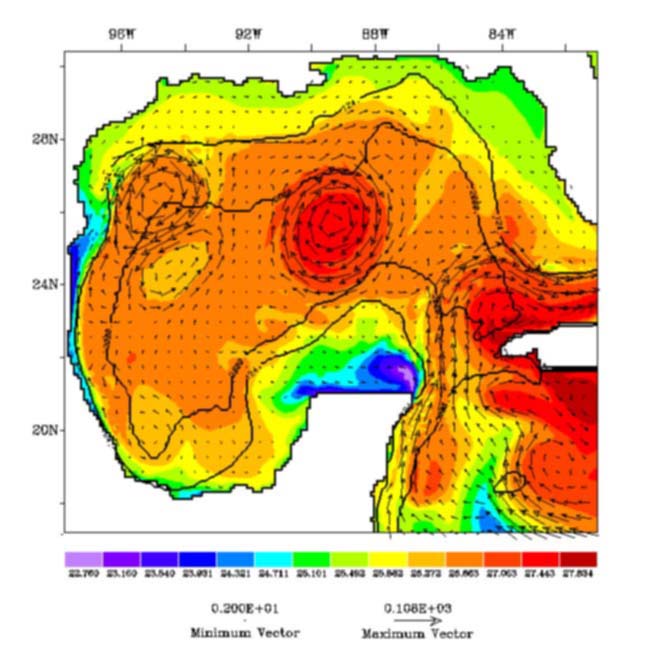 Modeling Deep Water in the Gulf of Mexico.

Susan Welsh has developed a primitive-equation, numerical ocean model for the Gulf of Mexico. The model features high vertical and horizontal resolution in order to resolve the complicated bottom bathymetry and adequately simulate the small-scale flows associated with eddies. The first goal of this project was to realistically reproduce the observed upper-layer circulation features of the GOM, including the vertical structure of the LC and LC rings, which dominate the circulation in the eastern GOM. The model circulation in the deep layer agrees with output from other modeling efforts, but there is little data available to verify these results. The Lagrangian technique of seeding and tracking tracer particles is used to examine detailed transport and mixing processes and to identify the processes responsible for ventilation of the deep water.