Feltus Taylor, Jr. was an African American man born in poverty, convicted of murder, and sentenced to death. For many years, he lived at Angola’s Death Row, isolated from almost all human contact. In 2000, Feltus, age 39, was executed by lethal injection by the state of Louisiana after almost a decade of legal appeals. In 1991, he had murdered one former co-worker and left another paralyzed.

Dr. Cecile Guin has dedicated her life to researching social problems inherent to Louisiana. She is a board certified social worker and an expert in criminal behavior, truancy, and death penalty mitigation. Through her many years of research, teaching, and service, she has helped countless individuals improve their lives. It is through this tireless dedication that she encountered Feltus in the fall of 1997. What initially began as a client relationship turned into a friendship that lasted years.

Social workers play a pivotal role in death penalty mitigation teams. These teams work to present information to the court regarding the defendant. This is not to excuse the defendant’s behavior, but to provide the jury with information about the defendant’s life circumstances so they might consider life in prison rather than the death penalty. Social workers offer expertise in researching complete social histories of defendants, providing for people under threat of execution, and helping those individuals cope with that threat. The social worker’s primary role is to develop the client’s life story through an extensive empirical inquiry. Social workers with LSU’s Office of Social Service Research and Development (SREC), in tandem with other professionals, worked to elucidate what factors propelled Taylor to commit armed robbery and murder.

The multi-disciplinary team that worked together to uncover and tell Feltus’ complex life story included social workers, two post-conviction attorneys, a spiritual advisor, forensic psychologist, psychiatrist, neurologist, mental health workers, and more. Guin’s role in the team was serving as one of two licensed social workers. The first function of the team was to compile Feltus’ complete social history.

Feltus was born in New York, abandoned by his birth parents at age three. He was unable to speak and was not toilet trained. A Louisiana couple adopted him. The marriage was unstable, sometimes leaving Taylor in situations where he was exposed to violence, extra-marital relationships and the inevitable divorce of his adopted parents. At age 13, Feltus was given to his grandmother, who forbade him to leave the yard or play with other children. He had a severe speech impediment. This, along with developmental delays, led to poor school performance and bullying by his classmates. At age 18, he dropped out of school. He had a fourth-grade reading level and juvenile record for burglary. At age 19, he committed armed robbery and spent 10 years in prison, an extremely long sentence for a first offender. There he was raped and later developed sexual relations with other inmates, leading to feelings of confusion and guilt. He was sanctioned for fighting, a form of self-protection. He began to increasingly use drugs that were illegally available in the jail. Feltus entered the prison’s GED program several times. He eventually achieved the GED, bringing him great pride.

Once released, Feltus returned to his grandmother but could not stay there. If he did, her Supplemental Security Income benefits would be impacted. Feltus' grandmother loved him more than anything and wanted to help him stay out of jail. He then lived in an old car.

Feltus was described as a likable person, an enthusiastic worker. He held various minimum-wage jobs. He was in a relationship, but after she ended it, he was so upset he could not continue working and subsequently lost his job. When he tried to regain it, his manager refused to hire him back, but offered to help him secure another job at a less busy location. A former co-worker lost her temper and called Feltus derogatory names. He saw an open safe containing money. Tired, mad, and hopeless, he went to his car, retrieved a pistol, and returned to the restaurant. He shot his former manager and co-worker. He was arrested within hours and charged with first-degree murder. His guilt was never in question and he never denied what he had done. Feltus spent the remainder of his life on Death Row in Angola Prison.

After several years of communication with his spiritual advisor, Feltus began to make peace with his situation. Feltus claimed that the support of his legal team and the kindness of pen pals and the spiritual community was the family he had sought for so long. His life goal became to prevent young people from going down the same path he had traveled. Feltus never forgave himself for committing the horrible act of violence, but was forgiven by his living witness at the execution.

Before his death, Feltus wrote an autobiography about his life and the events that led him to commit the terrible act. Guin, along with Feltus’ spiritual advisor Charles DeGravelles, and her team of dedicated students, assisted Feltus in drafting and editing the final manuscript. Another LSU graduate and current Master’s student was working for Guin and coordinated all of Feltus’ work into the final manuscript.

The completed book and rights to his life story were licensed, through the LSU Office of Innovation and Technology Commercialization, to Still Standing Pictures, Inc., a film production company owned by an LSU graduate. This very difficult 15-year process was finally resolved through the Herculean efforts of LSU’s Office of Innovation and Technology Commercialization. 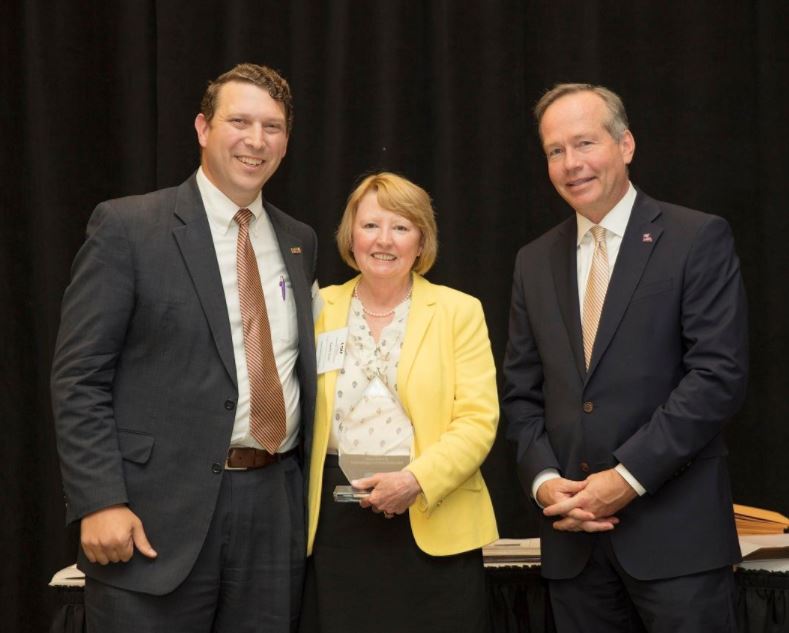 On May 9, 2017, at the third annual Inventorship Showcase, Guin received the Excellence in Innovation award from the LSU Office of Innovation & Technology Commercialization. She received this award for her work in getting the final manuscript prepared to be licensed for eventual print, movie, and television production. Her commitment to her students, staff, LSU, the Baton Rouge community, and Louisiana goes far beyond what others have been willing to do.

For almost 40 years, Guin has worked with many children and youth that epitomize Feltus. These youth were propelled into the juvenile justice system through educational failure, developmental disabilities, child maltreatment, and a variety of other difficulties. The majority of youth she has researched or had direct practice with share consistent factors – poverty, mental illness, learning disabilities, and child abuse. Feltus' story was no different.

Feltus was Guin’s first client to be executed that she knew well. But, she says, his life story is similar to many other inmates. Over the years, the life histories she researched and studied began to replicate themselves. She continues her difficult but compelling work though her research at LSU. She said Feltus left her with “wonderful informational tools and stories that help me deal with those who have followed him.”

“I understand his path now, as well as his moral and spiritual rehabilitation. Now I never see the depths of despair without seeing the potential for development,” she said.

For more information, see the following:

Dr. Guin has served as the Director of the LSU Office of Social Service Research and Development (SREC), LSU School of Social Work, since 1996. As Director of SREC, Dr. Guin develops programs and seeks funding aimed at interrupting the pathway to delinquency, crime, and other forms of non-productivity that claim so many Louisiana children and youth. She is court qualified in the areas of adult criminality, development of a criminal personality, juvenile delinquency social work, and cultural poverty.

The Office of Innovation & Technology Commercialization works with the University research community to facilitate the evaluation, protection, and licensing of intellectual property created at LSU.

The LSU Office of Social Research & Evaluation Center is a unit within the College of Human Sciences and Education that fosters healthy social systems by facilitating the development, implementation and evaluation of social programs; conducting research; and providing consultation and expertise to the university, community, policy makers, and partners. Since its inception, SREC has obtained over $100 million in funding for research, program development, and community partners.

The College of Human Sciences & Education (CHSE) is a nationally accredited division of Louisiana State University. Formed in 2012, CHSE brings together programs and capitalizes on individual strengths to create a dynamic new college that addresses the socially significant issues we face as a state and nation. The College is comprised of the School of Education, the School of Leadership and Human Resource Development, the School of Kinesiology, the School of Library and Information Science, the School of Social Work, and the University Laboratory School. These combined schools offer 8 undergraduate degree programs and 18 graduate programs, enrolling more than 1,900 undergraduate and 977 graduate students. The College is committed to achieving the highest standards in teaching, research, and service and is continually working to improve its programs.