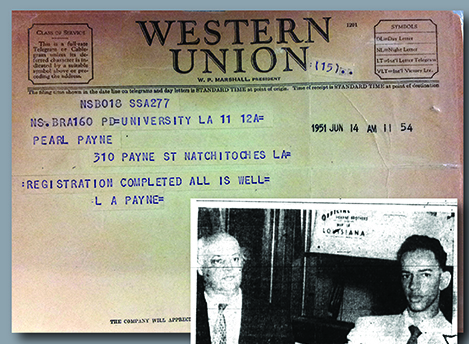 Pictured here is the telegram Lutrill sent Payne about registering for graduate school. He writes "Registration completed All is well"Photo Credit: LSU Libraries

In 1951, Mr. Payne, with the help of attorney A.P. Tureaud Sr. of New Orleans, filed suit in the United States District Court for the Eastern District of Louisiana to integrate the LSU Graduate School. Lutrill ultimately won a judgment in his favor, enabling him to be the first African-American to attend graduate school at LSU and paving the way for his wife, and many other African-American students to attend LSU.

In 1956, Pearl was the first black female to graduate from LSU with a Masters of Education.

Pearl, along with her extended family, attended the College of Agriculture’s commencement ceremony on December 18, 2015 to accept her husband’s LSU University Medal, LSU’s highest academic honor.

Lutrill, born in 1910, was a native of Union Parish. He earned his bachelor’s and master’s degrees in agriculture and agribusiness from Southern University before teaching agriculture in Union, DeSoto and Ouachita parishes. Lutrill passed away in 1999. He was a veteran of World War II and the first African American to run for public office in Natchitoches.

Pearl, born in 1918, is a native of Natchitoches, La. She knew she wanted to be a teacher when she was in the fifth grade and still supports the profession today.

Pearl spent 37 years in the classroom. She is a mother of three children, grandmother and great grandmother to 19.

Both Lutrill and Pearl were active participants in events sponsored by the A. P. Turuead, Sr. Black Alumni Chapter at LSU. They both worked well into their 80s on various business and community projects that impacted many.