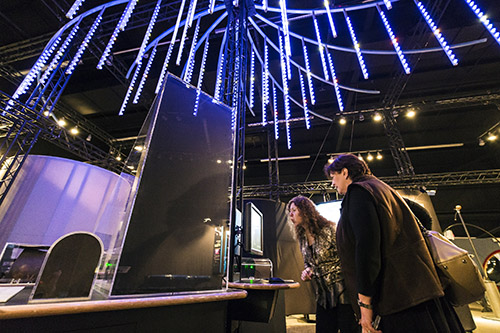 Just 32 miles from the state’s flagship institution, in the seat of Livingston Parish, you will find one of the world’s most ambitious physics experiments to date. With more than $500 million in support from the National Science Foundation over 18 years, the Laser Interferometer Gravitational-Wave Observatory, or LIGO, is one of NSF’s largest investments and possibly one of Louisiana’s best kept secrets.

LIGO Livingston is a facility of the LIGO Scientific Collaboration, or LSC, which consists of more than 900 scientists from institutions throughout the U.S. and 16 countries working together to detect and analyze gravitational waves as defined by Einstein’s Theory of General Relativity.

Einstein asserted that when large astronomical objects undergo violent processes they produce gravitational waves, which are essentially ripples in space-time. These events include black hole systems orbiting each other, black holes and neutron stars colliding or even a star exploding (a “supernova”).

Nearly 100 years after Einstein’s prediction, LIGO scientists tucked away in the woods of Livingston Parish, are on the cusp of proving this theory with tangible evidence of these cosmic events happening millions of light years from Earth.

The spokesperson for this massive collaboration is LSU Physics & Astronomy Professor and LIGO scientist Gabriela González. Internationally recognized for her work with LIGO, González has been a member of the LSC since its founding in 1997. She was also featured in “LIGO Generations,” a documentary highlighting four generations of researchers committed to proving the existence of gravitational waves.

“I began visiting the LIGO detector during its construction, long before I came to LSU as a professor,” said González. “I knew many colleagues in the Department of Physics & Astronomy at LSU who were then working at LIGO.”

Prior to LSU, González and her husband Jorge Pullin, LSU’s Horace Hearne Chair in Theoretical Physics, held faculty positions at Penn State. When Pullin was offered a position in the LSU Department of Physics & Astronomy in 2001, González set her sights on a research scientist post at LIGO.

As luck would have it, LSU came up with an even better offer—a faculty post in the physics department and the possibility of a research position at LIGO Livingston.

“The focus of my research revolves around the instrument itself,” said González. “My research group is involved with the characterization of the noise in the LIGO detectors, the calibration of the detectors and the analysis of the data.”

“Detecting the waves requires precision instrumentation, so we are constantly working and tweaking the instruments to make them more sensitive,” added González.

In past data-taking campaigns, LIGO scientists have not detected the gravitational waves, but González asserts that their existence is not in doubt.

"We have seen the energy leaving several systems with orbiting stars just as Einstein predicted, so we know the gravitational waves exist, but we have not yet measured the distortions arriving to Earth,” said González. “These stars colliding and black holes being born are extremely far away, but powerful enough that we should be able to measure them soon.

Evidence of the direct detection of gravitational waves could garner a Nobel Prize for members of the collaboration, which includes researchers that have dedicated more than 30 years to making this discovery.

González, LSC spokesperson since 2011, is responsible for managing the scientific activities of the collaboration, which includes attending conferences and hosting public talks to share LIGO science with the world. Earlier this year, she was invited to celebrate the 100th anniversary of Einstein’s Theory of Relativity during the World Science Festival in New York. She was featured on the “Reality Since Einstein” panel where she and leaders from an assortment of fields in gravitational physics discussed lingering questions and the latest works relative to Einstein’s theory. González has also participated in conferences in Washington, Germany and the United Kingdom.

In addition to the research work, education is also a core objective of LIGO. Part of LIGO’s programming includes widely popular outreach activities to introduce young people to math and science concepts and research opportunities for college students.

“The LIGO team believes in building the next generation of scientists, so we take outreach very seriously. Our intention is to get young and diverse people interested in science and science careers because we need the talent,” said González.

“NSF’s investment goes far beyond the facility. It funds undergraduate and graduate students, postdoctoral researchers and educators; so the support is not just for the nuts and bolts, but also for people.”

LIGO includes two observatories managed by Caltech and MIT— one in Hanford, Washington, and the facility in Livingston—and the GEO600 detector in Hannover, Germany. The Livingston facility includes a Science Education Center with 50 hands-on exhibits to demonstrate LIGO science. Each LIGO observatory has an L-shaped ultra high vacuum system, measuring 4km (2.6-miles) on each side, with lasers measuring the distance between mirrors hanging from sophisticated suspension and seismic isolation structures.

To further LIGO’s efforts, the original LIGO installations are undergoing a major upgrade to Advanced LIGO configurations, which will increase the sensitivity of the observatory’s instrumentation ten fold, resulting in a 1,000 fold increase in the number of astrophysical candidates for gravitational wave signals. May 19 marked the dedication of Advanced LIGO, and LIGO scientists anticipate its first science run with Advanced LIGO later this year.

In a press release issued by LIGO Caltech, NSF Director France Córdova said, "Advanced LIGO represents a critically important step forward in our continuing effort to understand the extraordinary mysteries of our universe."

"It gives scientists a highly sophisticated instrument for detecting gravitational waves, which we believe carry with them information about their dynamic origins and about the nature of gravity that cannot be obtained by conventional astronomical tools."

The LSC has a strong collaboration and data sharing agreement with the Virgo collaboration, which has a 3 km detector in Cascina, Italy. Also in the works, are proposals to expand the LIGO network to India. Three interferometers were built with the anticipation of placing one in India to extend LIGO network detectors, which would produce an even more effective global network.

The LIGO team remains steadfast in their work to find gravitational waves. Their discovery will serve as the foundation for a rising field of science, termed gravitational wave astronomy, and will place LSU scientists, like González, at the forefront of a breakthrough that will forever change the way we view the universe.

Gabriela González, native of Córdoba, Argentina, earned her Licenciatura, equivalent to a Masters of Science degree, from the University of Córdoba in 1988. She earned a PhD from Syracuse University in 1995 and began working with the LIGO group at MIT in 1997. She joined the faculty at Penn State in 1997 and four years later accepted a faculty position at the LSU Department of Physics & Astronomy.