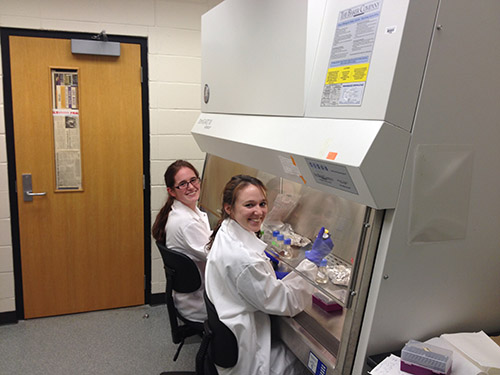 The world we live in is made up of millions upon millions of tiny organisms, and though too small to be seen by the naked eye, these miniscule living things are responsible for many of the most fundamental processes on our planet. J. Cameron Thrash and the researchers in the award-winning Thrash Laboratory are interested in understanding these microorganisms and their contributions to biochemical cycles in the Gulf. These microbial communities directly impact many things that people care about, including seed fisheries and coastal restoration.

“In the Gulf, we have a massive influx of nitrogen and phosphorus compounds from the Mississippi River due to farmland runoff. Microbial communities primarily deal with these nutrients and this affects upstream food webs like fisheries and everything else,” said Thrash. “Anytime we have issues with farmland runoff, oil spills and other petroleum issues, the microorganisms are the first ones dealing with these compounds.”

Understanding the importance of this work to the Gulf, the Louisiana Board of Regents, or BoR, has awarded Thrash a $129,750 BoR Competitiveness Subprogram grant to establish LSU’s first microbial culture collection.

The project supports a survey of seven sights along the southern coast of Louisiana over a three-year period. Thrash and his team are collecting raw sequence information to assess how well their cultivation efforts reflect the natural communities that are there. They began collecting samples last summer and in that time have already isolated more than 100 microorganisms, at least two of which are strains representing whole new families of marine bacteria. The group also hopes to find organisms valuable to industry and pharmaceutical companies.

“As we refine our technique and adapt to the environment that we are working in, we are going to pull out considerably more novel taxa. There is a strong potential for isolating organisms that people have not seen before in the Gulf because this is a very unique region with unique influences, and the water is very different than in other coastal regions where people are doing lots of cultivation. So, we have an opportunity to find some really new things,” said Thrash.

Thrash also collaborates with Nancy Rabalais at the Louisiana Universities Marine Consortium, or LUMCON, and Olivia Mason at Florida State University to study the microbial ecology of the Northern Gulf of Mexico dead zone. Thrash has participated in two LUMCON cruises to map the shelf wide dead zone, an area of low oxygen that can measure over 5,000 square miles. During these cruises, the researchers collect sequence data to understand which microorganisms are present and to chart the areas where oxygen is lowest compared to other areas.

“Understanding how the dead zone forms and resolves, and knowing which organisms are present, will allow us to better anticipate how big the zone will be year to year and to help advance really meaningful solutions for how to mitigate an issue that will potentially affect fisheries and be detrimental to marine life,” said Thrash. “The more information we have about how this process works, the more we will be able to come up with complete solutions for making it better.”

Thrash has also partnered with Ocean Adventure Rowing and Education Organization, or OAR Northwest, to survey an entire transect of the Mississippi River. Thrash equipped the expert seamen with a simple protocol for collecting water and nutrients for microbial analysis throughout a 90-day rowing expedition.

“We were very lucky to connect with OAR Northwest. There have been a number of recent studies of the Mississippi River, but no analysis from the top of the river to the bottom, which is very difficult,” said Thrash.

"The information that OAR Northwest captured, feeds into the information we have about the coastal areas because all of the water coming out of the Mississippi River directly influences what’s going on in the southern Louisiana coastal region and the formation of the dead zone. So, we are trying to connect the dots on a large, systemic scale.”

Thrash asserts that the work taking place in the Thrash Lab is for the masses. The group maintains a lively web and social media presence with photos and video documentation of their adventures in the field. Earlier this year, the lab received an honorable mention for the 2015 Mindlin Science Communication Prize for the Thrash Lab Blog. The prize is given to junior faculty with the best nominated blog covering teaching and research in any field of science, mathematics, engineering and medicine for a lay audience.

“We have lots of cool material,” said Thrash. “It’s fun because it shows people what we are really doing. Science is not just about sitting in a lab and it’s not just about the technical details. Science is a lot of fun and it serves a lot of purposes. This helps with recruitment and helps attract graduate students to the university.”

Thrash admits that he loves his work, which includes spending lots of time on the coast and the bayou.

“We do a lot of underwater work, so we dive and collect samples underwater and shoot video of the marine habitats,” said Thrash.

Thrash also has an active twitter page with more than 3,000 followers. As a matter of fact, if you walk into a classroom where Thrash is teaching and notice students typing messages on their phones or taking photos, they are not texting their friends or posting photos to snapchat. These students are actually engaged and participating in class. This is what classroom participation looks like in Thrash’s class, especially on presentation days.

“The best way to learn a subject matter, is to try and teach it to other people,” said Thrash. In a Thrash class, twitter is used as a live note taking process.

“It forces the students to think concisely because you only have 140 characters,” said Thrash. “What you write has to get to the point quickly and each tweet must have meaningful content.”

The students are encouraged to “live tweet” presentations and some classes actually establish Wikipedia pages about unique microorganisms not already featured on Wikipedia.

Thrash said that tweeting and setting up Wikipedia pages helps students stay focused on the material and also involves them in sharing information with the larger microbiology community.

Moving forward, Thrash plans to leverage the organisms his team has isolated as part of the cultivation collection and begin genomic sequencing and comparative analysis. He is also collaborating with Professor Chunyan Li in LSU’s School of the Coast & Environment to examine how the physics of ocean water influences when and where microorganisms show up. Currently, Thrash and Li have a few test projects in southern Louisiana.

Learn more about the Thrash Lab by visiting thethrashlab.com.

Read more stories about the exciting research taking place in the LSU College of Science in the latest edition of The Pursuit magazine.