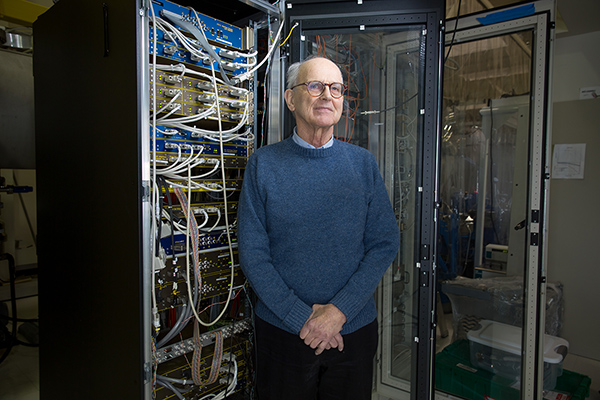 Rainer Weiss, 2017 Nobel Laureate in Physics, MIT Physics Professor Emeritus, and LSU adjunct professor in physics and astronomy, will serve as the keynote speaker for the LSU College of Science spring ceremony, Friday, May 11 at 12 p.m. in Maddox Field House.

Weiss is a pioneering leader of the Laser Interferometer Gravitational Wave Observatory (LIGO) Laboratory, which is comprised of LIGO Hanford and LIGO Livingston, and operate as a consortium of Caltech and MIT.

Weiss received his bachelor’s degree and PhD in physics from MIT. He is known for his pioneering measurements of the spectrum of the cosmic microwave background radiation, his inventions of the monolithic silicon bolometer and the laser interferometer gravitational wave detector, and his roles as a co-founder and an intellectual leader of both the COBE (microwave background) Project and the LIGO Project. Weiss is a member of the National Academy of Sciences and has served on nine National Research Council committees from 1986 to 2007 including the Committee on NASA Astrophysics Performance Assessment, the Panel on Particle, Nuclear, and Gravitational-wave Astrophysics, and the Task Group on Space Astronomy and Astrophysics. He has received numerous scientific and group achievement awards from NASA, an MIT excellence in teaching award, the John Simon Guggenheim Memorial Foundation Fellowship, the National Space Club Science Award, the Medaille de l’ADION Observatoire de Nice, the Gruber Cosmology Prize, and the Einstein Prize of the American Physical Society. Weiss is also a fellow of the American Association for the Advancement of Science, the American Physical Society, The American Academy of Arts and Sciences; and he is a member of the American Astronomical Society, the New York Academy of Sciences, and Sigma Xi. Weiss has been an adjunct professor at LSU since 2001.

“Dr. Weiss is a trailblazer in gravitational wave research who continues to elevate the standard for research across the globe. We look forward to having him share his experiences with our newly minted science graduates and offer words that will inspire them as the embark on this new chapter,” said Cynthia Peterson, dean of the LSU College of Science and Seola Arnaud and Richard Vernon Edwards Jr. Professor.

Weiss and California Institute of Technology professor emeriti Kip Thorne and Barry Barish, were awarded the 2017 Nobel Prize in Physics for the first detection of gravitational waves. The detection confirmed a major prediction of Albert Einstein’s 1915 general theory of relativity, which opened an unprecedented new window into the cosmos.

The LIGO Livingston Observatory is located on LSU property, and LSU faculty, students and research staff are major contributors to the international LIGO Scientific Collaboration (LSC). Gabriela González, LSU professor of physics and astronomy, is the former elected spokesperson, who led the LSC during the initial detection of gravitational waves. Together with other leaders and founders of the LIGO effort, González made the official statements about the historic detection on Thursday, Feb. 11, 2016 at the National Press Club in Washington, D.C., before gathered national science press.

“Rai has been a great lifetime mentor not only to two LSU professors, Joe Giaime and myself, but also to generations of LSU and other institutions’ graduate students and postdocs - that was indeed the title of a documentary celebrating LIGO generations,” said González.

The College of Science spring diploma ceremony will be streamed live at 12 p.m. at science.lsu.edu, so tune in to hear Dr. Weiss’ speech and celebrate the spring 2018 graduates.

To learn more about Weiss and his contributions to LIGO’s history-making discovery, all LSU faculty, staff, and students are invited to a “Coffee Chat with Rainer Weiss,” hosted by the Department of Physics & Astronomy, Friday, May 11 at 2:30 p.m. in Nicholson Hall, room 435.