Can Plants Inspire the Next Viable Energy Source? 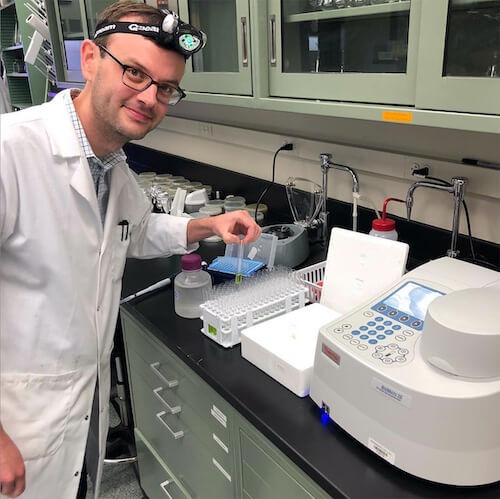 David J. Vinyard at the Vinyard Lab on LSU's campus.

BATON ROUGE—Days after Hurricane Ida devastated coastal Louisiana and knocked out power to practically the entire southeastern portion of the state last August, a significant fuel shortage quickly became one of the more pressing issues.

Lines of cars were a common sight near gas stations lucky enough to have a supply of fuel. Some waited hours to fill up a single gas can, while others left empty-handed. Gasoline-powered generators were one of the few reliable power sources in the area, and the devastation caused by the lack of fuel alone was immense.

Many conversations after the hurricane revolved around fuel, alternative power sources, and reliability, as those with solar-powered generators and solar-panel systems fared somewhat better than their fuel-reliant neighbors.

Solar energy is not a new concept and has been implemented on a grand scale world-wide. “Solar energy is the fastest growing and most affordable source of new electricity in America. Over 3 million installations (of solar panels) have been built across the country—with 1 million being built in the last two years,” according to the U.S. Department of Energy.

But David Vinyard, assistant professor in LSU’s Department of Biological Sciences, is looking at another possible renewable method of harnessing the power of the Sun: photosynthesis.

The process of photosynthesis—a plant’s ability to absorb sunlight and use that energy to make the sugars from water and carbon dioxide on which the plant feeds—has been well documented since the 18th century. Dutch physiologist Jan Ingenhousz became known for the discovery that light is an essential component plants need to flourish.

But there is still a lot we do not know about what happens during photosynthesis, according to Vinyard.

“It's shocking how much we don’t know about how nature converts light energy to chemical energy considering it’s happening at such a massive scale,” Vinyard said. “If we can learn the chemical and physical mechanisms used by nature, we can give those blueprints to chemists and engineers to develop clean energy conversion devices. Essentially, we could create an artificial leaf.”

Vinyard, who received a DOE Early Career Award in 2019 to study energy conversion, researches the minute chemical mechanics of photosynthesis, a process that has been happening for billions of years. Vinyard’s lab is conducting what he calls “very fundamental research,” tracking the process atom by atom, electron by electron, to map out exactly how the chemical bonds are broken and formed through each miniscule step.

Another important component about going the photosynthetic route to create clean energy, according to Vinyard, is that natural photosynthesis uses only Earth-abundant materials. Many catalytic systems being developed by chemists and engineers still rely on rare elements like platinum, rhodium, and palladium, which are not only expensive but are also only found in select places.

An artificial leaf used for clean energy production would have two parts, according to Vinyard. First, a catalyst would use light energy to strip electrons and hydrogen atoms from water, or H2O. Ideally, this process would use low-cost materials.

“Nature can split water molecules using abundant calcium and manganese, and that’s remarkable,” said the researcher. In the second part, the released hydrogen atoms and electrons are recombined to generate hydrogen gas, H2, which can be used as a fuel.

"If we can learn how natural photosynthesis splits water using sunlight, then we could apply this knowledge towards the development of inexpensive and efficient solar fuel cells,” Vinyard said. “In emergencies, fuel could be generated on demand using only water and sunlight. One day—hopefully soon—this type of technology could help us transition away from the widespread use of fossil fuels.”