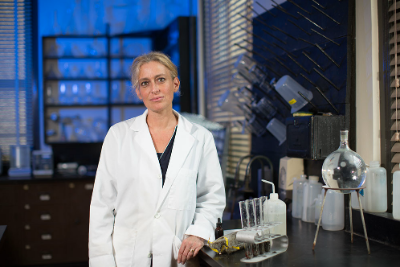 “This medal recognizes leaders in palynological education. Nominees are expected to have considerable experience and accomplishment in aspects of academic education involving palynology,” AASP said in a released statement.

Warny has more than a decade’s experience teaching micropalaeontology, and her research interests go beyond palynology and micropalaeontology and include historical geology, climate change and stratigraphy. During her career, Warny has contributed to at least seven educational books and articles focusing on palynology, in addition to dozens of publications in journals such as Science, Nature, Nature Geoscience, PNAS, Geology and Gondwana Research.

In addition to her role in the Department of Geology & Geophysics, Warny holds a number of other positions. Warny is a curator and the director of education at the LSU Museum of Natural Science, as well as the AASP chair. She is the director of the AASP-The Palynological Society Center for Excellence in Palynology (CENEX) and served in 2016 as vice president of the Gulf Coast Section of Society for Sedimentary Geology (GCSSEPM) society.

Other awards include a LSU Rising Faculty Research Award in 2014 and a National Science Foundation CAREER award in 2011. Warny also received the AASP Graduate Student Award in 1996.

But it was the response from her former students that revealed the kind of impact Warny has had during her years of teaching and advising.

“Sophie is highly supportive of her students̕ advancement, and she shares her passion for research to impart her broad knowledge in palynology. Her teaching features a unique field-based and laboratory technique approach to make the subject challenging and exciting for students at all levels,” one nomination letter reads.

“Dr. Warny demonstrates a sincere interest in her students achieving personal goals and growing as human beings…One other passion I recognize in Dr. Warny is teaching and promoting science to students and young generations through her classes, seminars, and her work on the LSU Museum of Natural Science,” reads another.

“Several of Dr. Warny’s Introduction to Micropaleontology students have decided to pursue research in palynology after taking her course… [she] has an exceptional ability to inspire scientific passion in her students.” — former student Vann Smith.

“Dr. Warny is wonderfully generous with her time and expertise… she encourages all her students to put forth their best work and always has an open door.” — former student Shannon Ferguson.

“To her students, she is an up-close example of a dynamic working mother… I mention this example Sophie sets for her students to highlight the imperative that young women, especially  young women in STEM, have role models in education that they can look up to and see some of themselves in… Sophie is such a role model.” — former student Kate Griener.

“Dr. Warny’s efforts were not only focusing on us achieving the best we could in terms of Science. She had a genuine concern for us finding our own path including obtaining the best employment opportunities either in academia or in industry. Dr. Warny helped us develop our network with palynologists and/or geologists working on the academia and/or the O&G industry.” — former student Carlos Santos.

“Getting such an amazing recognition from former graduate students is the most meaningful award a faculty member can receive. I am incredibly honored, and I thank the society and all my students from the bottom of my heart,” Warny said.

Warny received her Ph.D. in 1999 from Catholic University of Louvain in Belgium and initially came to LSU in 2000 as a postdoctoral research associate. Her work revolves around understanding past climate change patterns by examining fossilized pollen and spores.