Why do some birds lose flight more readily than others?

Back in 2012, Ryan Terrill was hiking down a dry canyon in central Bolivia, looking for Giant Antshrikes—the largest species of antbird—, but he found himself, instead, thinking about 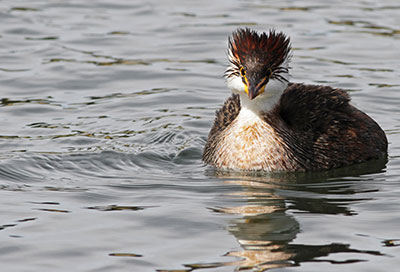 Titicaca Grebe (Rollandia microptera), a flightless bird endemic to the high Andes in Bolivia and Peru. All grebes are flightless for a period during their wing feather molt, and at least three species, including this one, have lost flight completely. This study investigates how this temporary flightless period may influence the evolution of permanent flightlessness in birds.
Photo Credit: Photo © Ian Davies

another bird: the Titicaca Grebe.

The most curious aspect of the Titicaca Grebe, scientifically known as the Rollandia microptera, is its flightlessness. And these birds are a part of a pattern that plays out across the world.

Terrill, who received his PhD in 2017 from LSU’s Department of Biological Sciences and Museum of Natural Science, has always been interested in the concept of molting, which is when a bird sheds its old, worn feathers and replaces them with fresh plumage.

He explained that different birds have different molting strategies. Some birds molt sequentially meaning they replace some feathers at a time, slowly working their way through, while others can molt all at once. And the process itself can take anywhere from a couple of weeks to as long as almost a year, depending on the species.

In a recently published paper, “Simultaneous Wing Molt as a Catalyst for the Evolution of Flightlessness in Birds,” the researcher notes that some groups of birds are more prone to loss of flight than others, but few studies have investigated the reasoning behind it. So he decided to test a hypothesis that this rare strategy of flight feather replacement is involved in this evolutionary happening.

“I hypothesized that adaptations for this flightless period may serve as preadaptations for permanent flightlessness under conditions that favor permanent loss of flight,” he noted. “We’ve long known that certain habitats favor the loss of flight in birds. Flight is intertwined with birds’ lives, but many species of birds have lost flight, especially on islands and in aquatic environments.”

Islands, it seems, create birds that stay on islands. As the name implies, the Titicaca Grebe’s main population occurs on Lake Titicaca, which straddles the border between Peru and Bolivia in the Andes Mountains and is one of South America’s largest lakes. These birds that live out on lakes aren’t subject to traditionally terrestrial predators, like foxes. They even make their nests on floating masses of reeds out on the water, and are known for being excellent divers, so their need to come to land is minimal.

Because of this, Terrill said it’s the absence of terrestrial predators that assists in making the conditions in which birds lose flight. “Flight is great for birds because they can migrate long distances, catch food, etc., but flight also imposes a lot of costs,” he said. “Birds have a huge pectoralis muscle that costs a lot of energy to grow and to maintain. There’s a lot of limitations on birds’ morphology to be able to fly.

“So it seems like birds get to an island without predators, and there's this open niche space, which is like being a terrestrial grazer herbivore kind of thing. And birds that are already 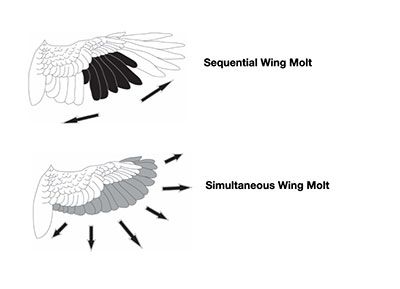 ‘used to living without flight,’ they can invade that really quickly.”

So how does molting play into the process? Molt strategy is a factor.

When certain groups of birds undergo this rapid molt, including ducks, geese, rails, and grebes, they are when it molts almost completely at a singular time, it’s rendered flightless and therefore loses much of their ability to maintain the functions it needs, like capturing food or escaping those previously mentioned predators. Most other birds that don’t molt wing feathers simultaneously are able to maintain their flight. So when its habitat is favorable to being flightless, birds that have adaptations to being flightless during molt may have a “head start” on losing flight over birds that don’t have this flightless period during molt.

“These birds evolve their adaptations to find food and escape without flying. They can hide in the reeds or live in the lakes and develop stronger legs to run faster,” he said. “And I found really robust results that birds with simultaneous wing molt will lose flight a lot quicker than birds without simultaneous removal. So there's a highly elevated rate of flightlessness in lineages that have simultaneously wing molt compared to lineages that don't.”