On Friday, December 18, 2015 LSU held its 288th Commencement Exercises. The Department of Geology & Geophysics would like to congratulate the following students for completing their degrees:

Good luck to all of our graduates on your future endeavors!

What Role do Hurricanes Play in Sediment Delivery to Subsiding River Deltas?

LSU G&G graduate James E. Smith, IV, is first author of an article published Dec. 2, 2015 in Scientific Reports, a Nature.com journal. The article provides the first account relating the long-term input of sedimentation to the Mississippi Delta from both hurricane flooding and river flooding, spanning timescales of many decades. The article is based on Smith's LSU G&G senior thesis, supervised by Dr. Sam Bentley, and USGS ecologist Dr. Gregg Snedden. This work is important because a vocal group of scientists have suggested that, despite the destructive abilities of hurricanes, hurricanes might actually be more effective at delivering sediment to river deltas than are the actual river floods that many scientists consider to be the primary sediment source. This argument of hurricane dominance infers that the construction of river diversions for coastal restoration is an ineffective approach to coastal restoration. The results in Smith's paper show otherwise, that hurricanes are an important sediment delivery mechanism to Mississippi Delta wetlands, but that river floods are the dominant source in the long term, and so river-sediment diversions are an appropriate restoration mechanism.

G&G John Franks Chair Peter Doran and his crew at Lake Fryxell in the McMurdo Dry Valleys of East Antarctica. The group is moving through the valleys deploying and servicing monitoring equipment for lakes and meteorology and collecting data and samples as part of the NSF-funded McMurdo LTER (Long Term Exological Research) project. Professor Doran is also splitting his time working on the sea ice in front of McMurdo Station on the NASA-funded SIMPLE project deploying an autonomous underwater vehicle beneath a local ice shelf. 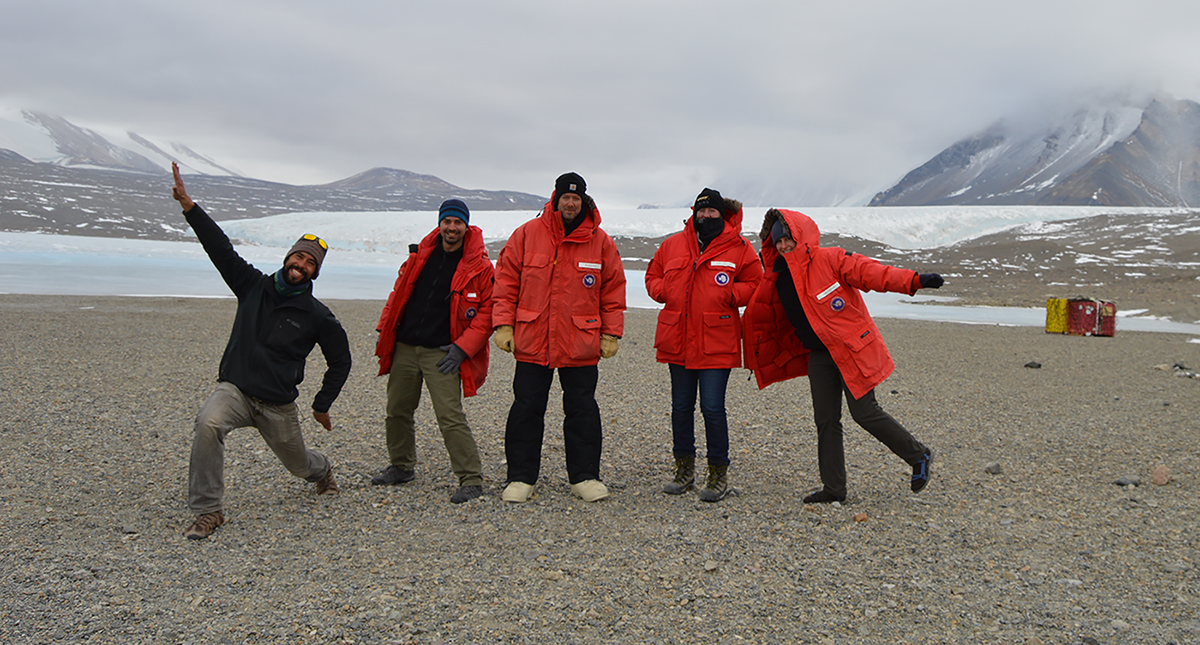 "Making predictions about climate variability often means looking to the past to find trends. Now paleoclimate researchers have found clues in exposed bedrock alongside an Alabama highway that could help forecast climate variability. In their study, the researchers verified evidence suggesting carbon dioxide decreased significantly at the end of the Ordovician Period, 450 million years ago, preceding an ice age and eventual mass extinction. These results will help climatologists better predict future environmental changes."

Catherine Hudson Does it Again!

For the second time this year, Chatherine Hudson had an article published in Earth Magazine!  Geology undergraduate, Catherine Hudson's, article "Peculiar Shape of Hair Ice Linked to Fungus" was published in the October 2015 issue of EARTH.  Read Catherine's article here.  Catherine is an environmental geology major and an extern at EARTH.  Congratulations Catherine!

G&G graduate students Krista Myers and Jade Lawrence leave Baton Rouge for their first trip to Antarctica. Professor Peter Doran will be a couple of days behind them. They will join up with Professor Doran's Postdoc Maciek Obryk and his Illinois graduate student Dimitri Acosta in New Zealand where they will all catch a military flight south. They will be team members of the National Science Foundation's McMurdo Long Term Ecological Research (LTER) which Professor Doran is a co-PI on and has been a part of for over 20 years. This year, Professor Doran will also be part of a NASA funded project sending an Autonomous Underwater Vehicle (AUV) under the thick McMurdo Ice Shelf as an analog for exploring Jupiter's moon Europa. 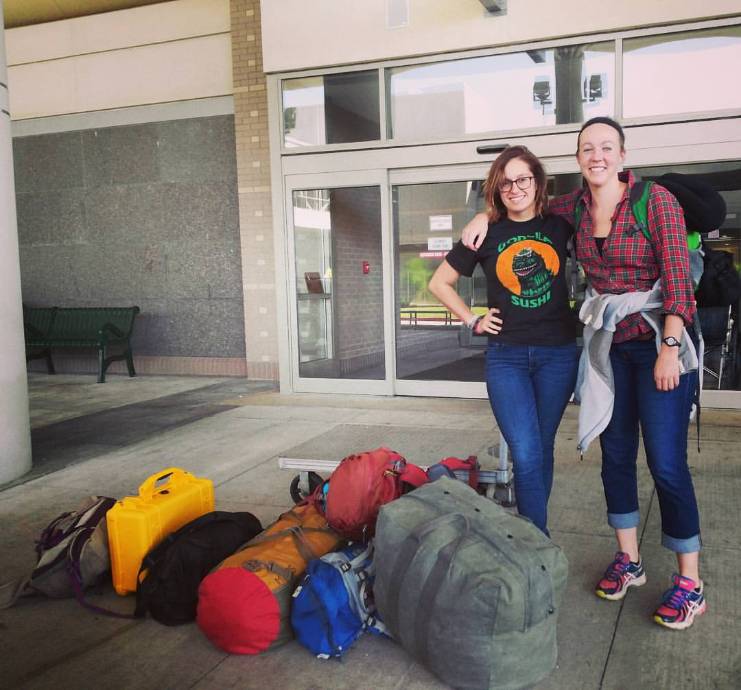 Geology & Geophysics doctoral student, Shannon Ferguson, contributed to the investigation that led to the identification of the body of Bella Bond, the two-year old toddler discovered on the shores of Deer Island in Boston on June 25. This past summer, Ferguson interned with the Department of Homeland Security, or DHS, in Houston where she worked with head palynologist, Dr. Andrew Laurence, in Customs and Border Protection, to track the origin of confiscated drug paraphernalia and other items. However, it was her work on the Baby Doe murder case that had the greatest impact on her summer internship experience.

As part of her internship, Ferguson assisted Dr. Laurence, her DHS supervisor, in the analysis of the pollen found in Bella’s hair and clothing. It was the results of this analysis that gave investigators their first break in the case.  Based on the pollen found on Bella’s clothes and blanket, it was determined that she was from the local area prompting police to focus their search in Boston.

"At the bottom of a frigid Antarctic lake, a thin layer of green slime is generating a little oasis of oxygen, a team of researchers has found. It's the first modern replica discovered of conditions on Earth two and a half billion years ago, before oxygen became common in the atmosphere."

During the period of Sept 4-13, Professors Kenny Rose (DOCS and associate dean, School of the Coast and Environment) and Sam Bentley (Director, CSI and Harrison Chair in Sedimentary Geology, Dept of Geology and Geophysics) visited the Indian state of Kerala, invited by and funded under the Erudite Visiting Scholar program of the Kerala state government. They delivered four guest lectures each at three colleges/universities, visited with students and faculty, and also conducted field trips to regional sites of coastal geological and ecological interest.

Rose and Bentley had a great time and were hosted most graciously. Their primary host was Professor A.N. Balchand, Department Head of Physical Oceanography, at the Cochin University of Science and Technology (CUSAT) in Kochi, Kerala, India.

In addition to lectures and interaction, a primary objective was to establish a collaborative education and research program with CUSAT.

This effort was formalized by signing of a Memorandum of Understanding with Vice Chancellor J. Letha of CUSAT. Research topics will likely focus on coastal resilience, coastal wetland ecology, and coupled human-natural systems such as the coastal fisheries that were the topic of local news articles featuring Rose and Bentley, on the Kerala coast near Punappra. This important coastal fishery is driven by the seasonal monsoon, which pushes river discharge, coastal currents, waves, and sediment transport that are essential to the fishery. 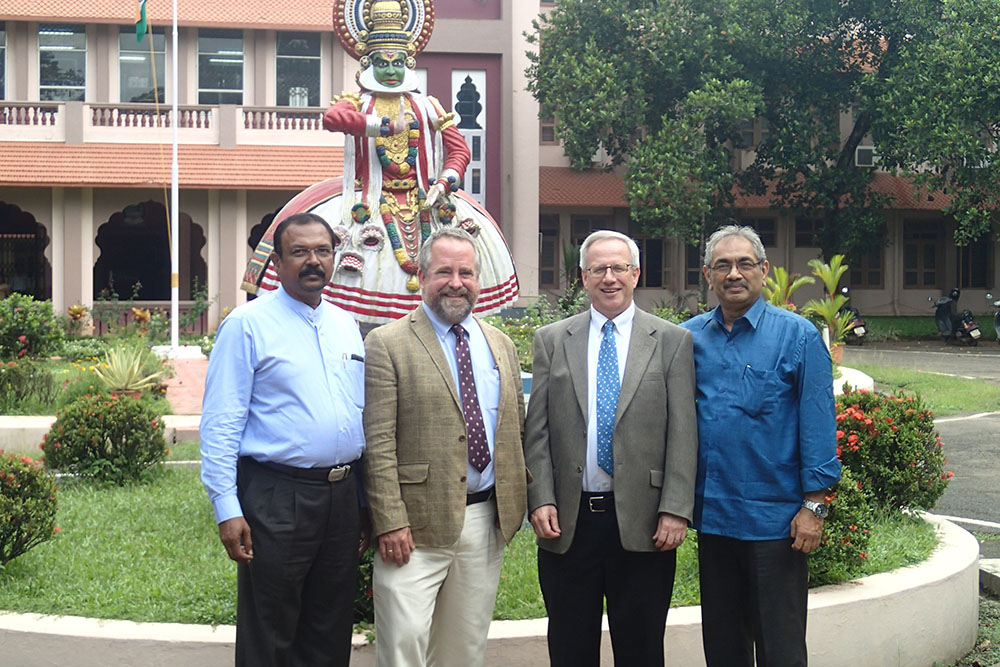 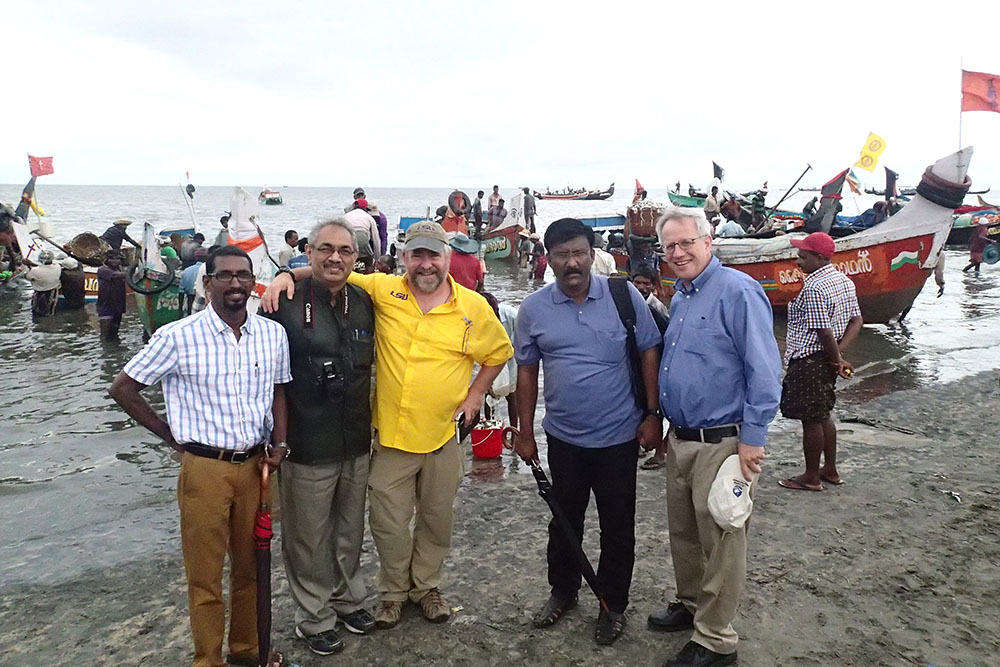 In an effort to support early-career scientists, researchers, and educators succeed, the Incorporated Research Institutions for Seismology (IRIS) Consortium created an early-career investigator (ECI) working group in late 2011. Its mission is to organize practical resources and professional development opportunities for ECIs.  Find out how Karen Luttrell and the rest of the group's coordinators are accomplishing that goal here.

What Will Your Gift Do?

LSU in Paris - The Experience of a Lifetime 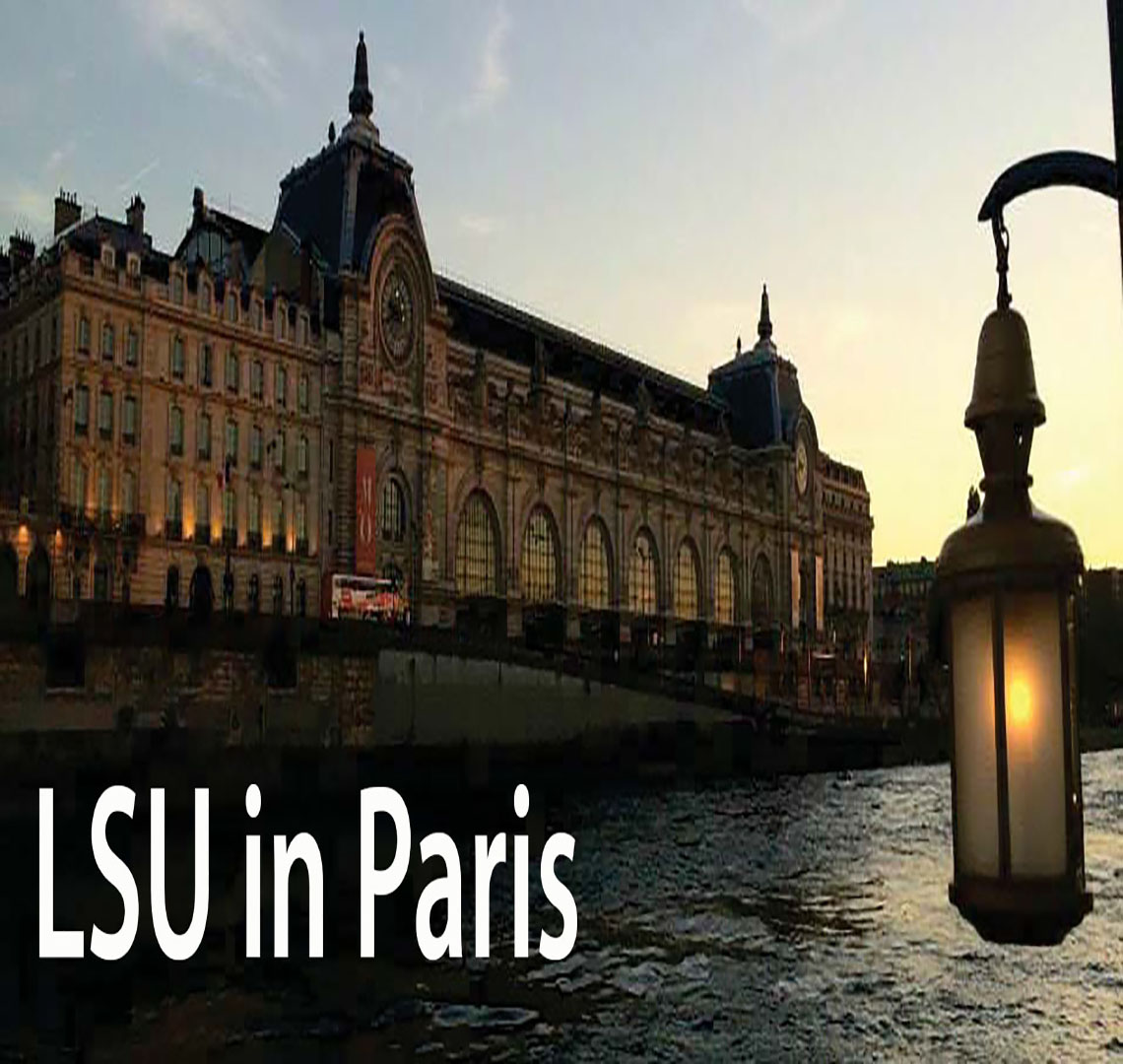 On Friday, August 7, 2015 LSU held its 287th Commencement Exercises. The Department of Geology & Geophysics would like to congratulate the following students for completing their degrees:

Good luck to all of our graduates on your future endeavors!

Astrobiologists gathered in Chicago, Illinois, from June 15-19th for the 2015 Astrobiology Science Conference (AbSciCon). Researchers from a multitude of disciplines, and representing institutions from around the world, used the conference to educate the next generation of astrobiologists.

“We put a lot of effort into the program, making sure as many people who wanted to talk could,” said Doran. “The trade off was short talks, but I think it was worth it. We also put a lot of time into keeping overlap to a minimum so that everyone could see what they wanted to see.”

LSU Geology & Geophysics​ graduate student, Abigail Maxwell (MS), is making big discoveries. Through her work on microseismic events in the hydraulic fracturing lab, she has found that there appears to be a striking similarity between the microseismic events detected in the lab and many documented volcanic tremors.

As a result of her hard work, Abigail has received an internship with the Caribbean Catastrophe Risk Insurance Facility to work in the Seismic Research Centre at the University of the West Indies, St. Augustine. 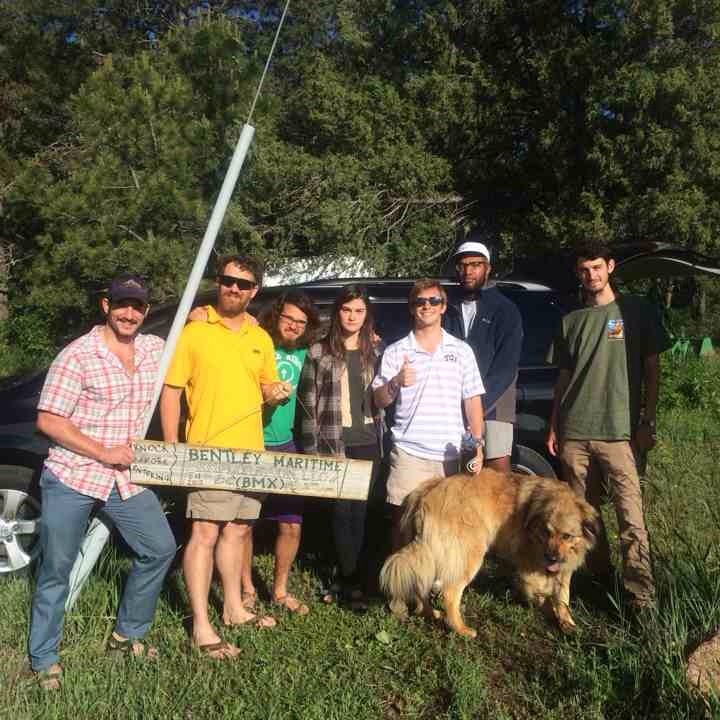 Dana Thomas, former LSU Undergraduate & PhD student with Professor Kate Maher in the Department of Geological and Environmental Sciences, conducting field research in Iceland. She is studying natural CO2-rich springs as analogues for CO2 storage in basaltic rocks. In addition to assessing carbon storage, she is evaluating the potential release of arsenic and nickel in minerals to groundwater in Iceland. 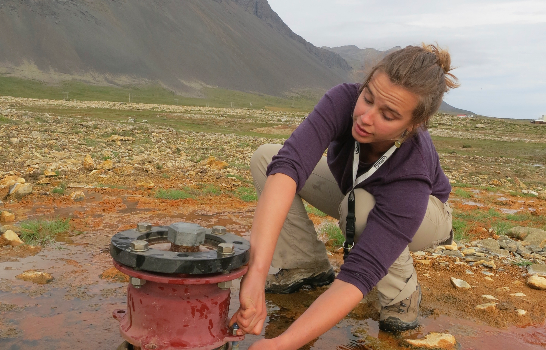 Three research project proposals from this year’s solicitation of CPRA’s Applied Research Program have been selected. The program was established to provide Louisiana-based researchers with funds to conduct engineering and science research and tool development activities that will enable CPRA to more effectively protect and restore coastal resources. The program is managed by the Institute on behalf of CPRA.

Peter Doran, PhD, believes there is life on other planets.

Quick to explain that he doesn't mean little green men, the hydrogeologist theorizes that microorganisms likelt exist every place there's water, including the ice-covered lakes of Jupiter's moon, Europa.

"Everywhere there's water on Earth, there's life," Doran said. "It seems reasonable that, if we look to a moon of Jupiter, and there's water there, there could very well be life. It happened here."

Doran is the first person to hold the John Franks Endowed Chair in the Department of Geology & Geophysics, a title he doesn't hold lightly. The Franks chair honors the legacy of John Franks, a 1949 geology graduate and founder of Franks Petroleum Inc. A valued supporter of LSU and the geology program, Franks was a founding member of the LSU Geology Endowment, and a member of the LSU Foundation Board of Directors, LSU Board of Supervisors, and Tiger Athletic Foundation Stadium Club. 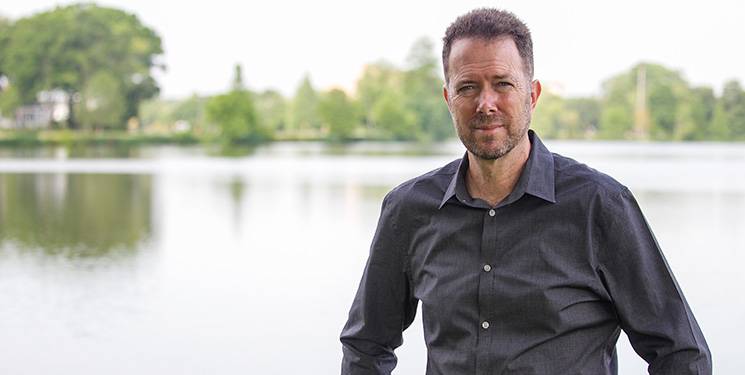 Antarctica Expedition Arrives and Sets Out to Sea

Dr. Phil Bart and his team of student researchers have landed in Antarctica and set out to sea for 29 days of research in the Ross Sea. 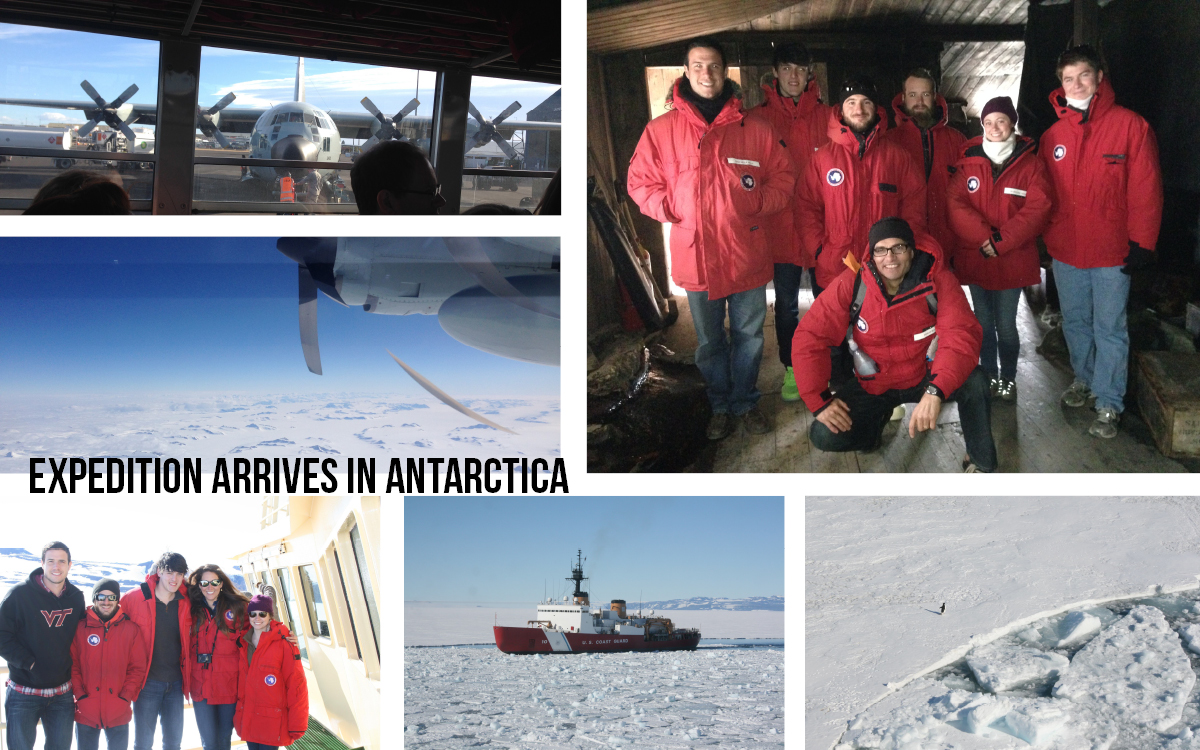 A student research team led by Dr. Phil Bart has made its way to Antarctica to begin an expedition into the Ross Sea. The team will be at sea collecting geophysical and geological data onboard the Nathaniel B. Palmer RV ice breaker ship for 29 days before returning to land and making their way back to Baton Rouge.

Darrell Henry, Campanile Charities Professor of Geology, was a keynote speaker at the quadrennial General Meeting of the International Mineralogical Association (IMA) held from September 1-5, 2014 in Johannesburg, South Africa. He presented the talk: “The petrologic potential of tourmaline: Interaction between crystallography and local environment revisited”. The IMA meeting convenes every 4 years and is likened to the Olympics of the Mineralogical world bringing the top crystallographers, mineralogists and petrologists together to network and discuss the latest research interests in the field. The International Mineralogical Association was founded in 1958 and is comprised of national mineralogical societies from 38 countries around the world.

Research conducted by Department of Geology & Geophysics' PhD student Kathryn Denommee, her advisor Dr. Sam Bentley, and Dr. André Droxler of Rice University has been making headlines in national news outlets on the insights their findings may have on the disappearance of the Mayan Civilization. The team's research involved analyzing cores taken from the Lighthouse Reef in Belize including some from the famous "Blue Hole" sinkhole. Through their study the group discovered indications of a period of drought that can be linked to the approximate time of the Mayan decline. Their research was recently published in Scientific Reports and presented at the 2014 AGU conference in San Francisco which led to the story being picked up nationally by the media.

If you pick up a copy of the January 2015 issue of AAPG's Explorer, you will find an article featuring LSU College of Science Dean Cynthia Peterson. In the interview, Dean Peterson discusses her return to LSU, her high regard for the Geosciences, and the progress being made within the Department of Geology & Geophysics.