By Leaps and Bounds: PhD Student Positions LSU as a Leading Contributor to Research on Quantum Key Distribution

Eneet Kaur is a doctoral student and rising star in quantum information science at LSU. She recently presented her work on quantum key distribution, a method to secure communications based on the physical principles of quantum mechanics, as an invited talk at the QCrypt conference in Montreal, Canada. Her advisor Mark M. Wilde is an associate professor in the Department of Physics & Astronomy with a joint position at the Center for Computation & Technology; 2018 Rainmaker; and author of Quantum Information Theory (Cambridge University Press, Second Edition, 2017). 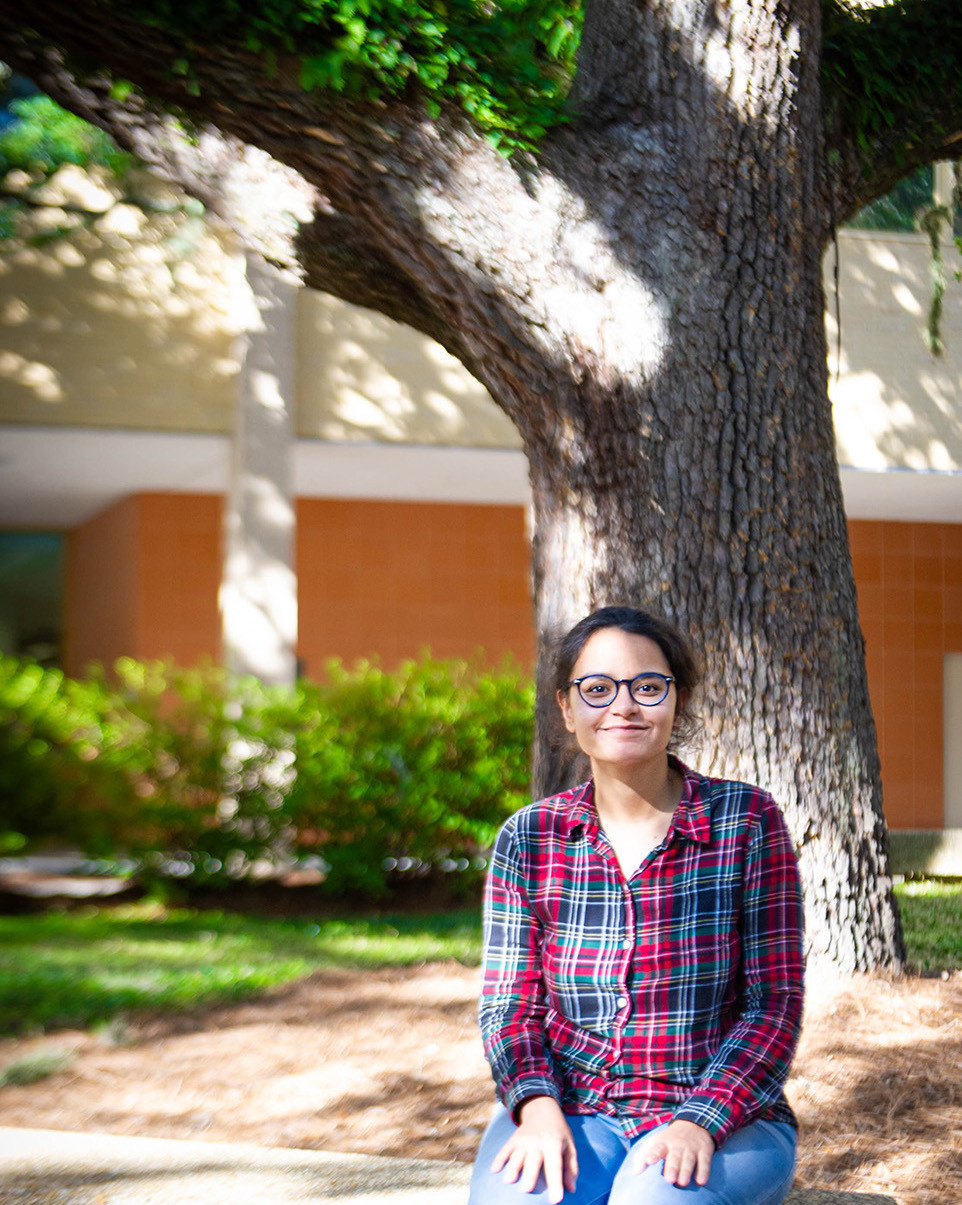 Kaur grew up in New Delhi, India. On her path to do a PhD in quantum information science, she’d read Wilde’s textbook, which made her decide to come to LSU.

“I was debating on whom to work with, but once I came to LSU, that was it,” she recalls. “Mark is a good teacher—very interactive—and that’s why I wanted to work with him.”

“There’s a regime in quantum key distribution that’s called device-independent quantum key distribution,” Kaur explains. “Let’s say you have Alice and Bob and they do not trust the devices in their laboratories; they do not know what the quantum states in their devices are, and they do not know the measurements the devices are implementing—and still, they want to extract a secure key. What Mark and I did was to find an upper bound on the best rate of secure key that Alice and Bob can extract in this scenario.”

“... we want to make an information-theoretic evaluation of security from physical principles, and this is what quantum key distribution does. Even if you get a very powerful computer, like a classical computer, a supercomputer, or a quantum computer, it shouldn’t matter. The security of the scheme should still hold.”

Kaur describes quantum key distribution by going back to Alice and Bob, who are separated geographically and might use optical fibers to transmit information to each other.

“Let’s say there’s an eavesdropper or malicious party who can receive the information that’s traveling in that optical fiber, or even control the fiber, maybe replacing it with something else, and do whatever the eavesdropper wants to do,” Kaur says. “Now, the question is—can you still establish a secure message between Alice and Bob? How can Alice and Bob share something that isn’t known to anyone else in the world, something that’s just between the two of them? What I want to do is to establish the security of their communication from an information-theoretic perspective.”

“We do not want to make statements on computational hardness like you do in existing schemes like RSA cryptography,” Kaur continues. “Instead, we want to make an information-theoretic evaluation of security from physical principles, and this is what quantum key distribution does. Even if you get a very powerful computer, like a classical computer, a supercomputer, or a quantum computer, it shouldn’t matter. The security of the scheme should still hold.”

“We use the amplitude and phase quadrature of photons to encode the information and then establish a security proof,” she explains. “We basically said, okay, we have a way to deal with these photons and can get a secure key out of that.”

“In principle, an eavesdropper can have a beam splitter inside the fiber and leak some of the information outside,” Kaur says. “We want to have a security protocol that is secure under this type of attack and any other attacks that you can think about. The security of the protocol has to be on mathematical terms. So, what we do is work on security proofs. We rigorously prove that the key you obtain is secure under any attack. There’s a whole community working on this area.”

”How you actually choose your questions, that’s really important. Can you even answer them? What tools do you have? If you’re given a certain problem, how do you approach it? What’s the first thing you need to think about?”

“It requires a lot of hard work to close the gap,” she says. “We have to develop new techniques, and it’s not easy to think of what techniques can be used in this scenario.”

Last August, Kaur presented an invited talk about their work at a conference for quantum cryptography in Montreal, Canada called QCrypt.

“It’s quite competitive—you submit and only a few people get selected,” Kaur says. “Mark and I just got an invitation to present our work without having to submit, and so it was quite exciting.”

Ten years from now, Kaur sees herself still doing quantum information research. She would like to focus on quantum communications, including network designs; figuring out new protocols that would have an advantage over classical scenarios and how they can be implemented in the lab.

Kaur was always interested in science. At first, mostly in biology, which in India turned out to be a crowded field. Instead, she decided to pursue physics. Biophysics became a way for her to “covertly” do biology, but this turned out to be an overcrowded path as well. When she expressed interest in a summer internship in biophysics at the Indian Institute of Science Education and Research, Mohali, there was no position open. Her supervisor, who worked in both biophysics and quantum information, encouraged her to head in a new direction.

“My supervisor just handed me something to read on quantum information, and from that first time, I found it to be super-interesting,” Kaur remembers. “There are counterintuitive phenomena that you don’t expect to happen, and then you figure out why they do. When I encountered this, that was my starting point to get involved in research. I started reading a standard textbook and then got more and more interested.”

During her four years at LSU, Kaur has had the opportunity to learn from leading experts in her field. She visited Stephanie Wehner, a German physicist and computer scientist known for introducing the noisy-storage model in quantum cryptography, in her second year.

“Every researcher has a different process of thinking and you can learn from everyone, how they approach their problems,” Kaur says. “I saw how Wehner organized her work and how passionate she is about science. How you actually choose your questions, that’s really important. Can you even answer them? What tools do you have? If you’re given a certain problem, how do you approach it? What’s the first thing you need to think about?”

”Sometimes a new perspective helps you, just extracting the basics of the problem and getting rid of the complicated features ... You distill out the most important parts and sometimes, if you’re lucky, what’s left is a simple thing. Most things have an underlying intuition, a root, which is important to understand.”

It was in the first summer after joining LSU that Kaur made her first significant breakthrough. Wilde had asked her to quantify the quantum steering effect using conditional mutual information while he was out of town, and as she was “just playing around with some functions,” she made an observation about how to construct a function that eventually led to the QCrypt talk and also will constitute half of her PhD thesis, which she plans to defend in March in time for graduation in May 2020.

“I haven’t really started writing my thesis yet,” she says. “I’m trying to finish a lot of projects before I leave LSU.”

One of these projects began this past summer, when Kaur was working with a quantum information researcher in Tokyo, Japan—Masahiro Takeoka.

“He had been working on something for a year or two and had come up with an information measure, a mathematical function of a quantum state,” Kaur recalls. “Let’s say that you want to upper-bound the capacity of quantum communications, like state-distillation in a quantum network. Suppose that Alice, Bob, and Charlie share a quantum state and they want to distill out a particular quantum state that’s the maximally entangled state between several parties. Our colleague in Japan was looking at the rate of secret key distillation and had a mathematical function to address that problem, but then I looked at it for a week—two, maybe—and realized it was too complicated of a function. It could be simplified by a lot.”

“It was not a complicated task,” she continues. “It was a simple observation. Sometimes a new perspective helps you, just extracting the basics of the problem and getting rid of the complicated features. The proofs went from two to three pages long to about half a page. This aspect ended up being nice. It was not like he couldn’t do it or anything; it was just that I had a new perspective. I wasn’t seeking to simplify it. But when I look at a formula, I just want to dumb it down so that I can understand it. I want to make it as simple as possible so it’s easy for me to grasp. When I was looking at his function, I wasn’t able to understand a couple of things—I couldn’t understand why some parts were involved, I couldn’t understand their relevance—so I thought, if I didn’t need them, what would be the function that I would construct? And then I did that and saw that it could be simplified. You distill out the most important parts and sometimes, if you’re lucky, what’s left is a simple thing. Most things have an underlying intuition, a root, which is important to understand.”

Kaur and Wilde’s joint paper, “Amortized Entanglement of a Quantum Channel and Approximately Teleportation-simulable Channels,” was selected as a highlight of 2018 by Journal of Physics A. Another paper, “Extendibility Limits the Performance of Quantum Processors,” was recently accepted into the journal Physical Review Letters, the premier venue for physics research.