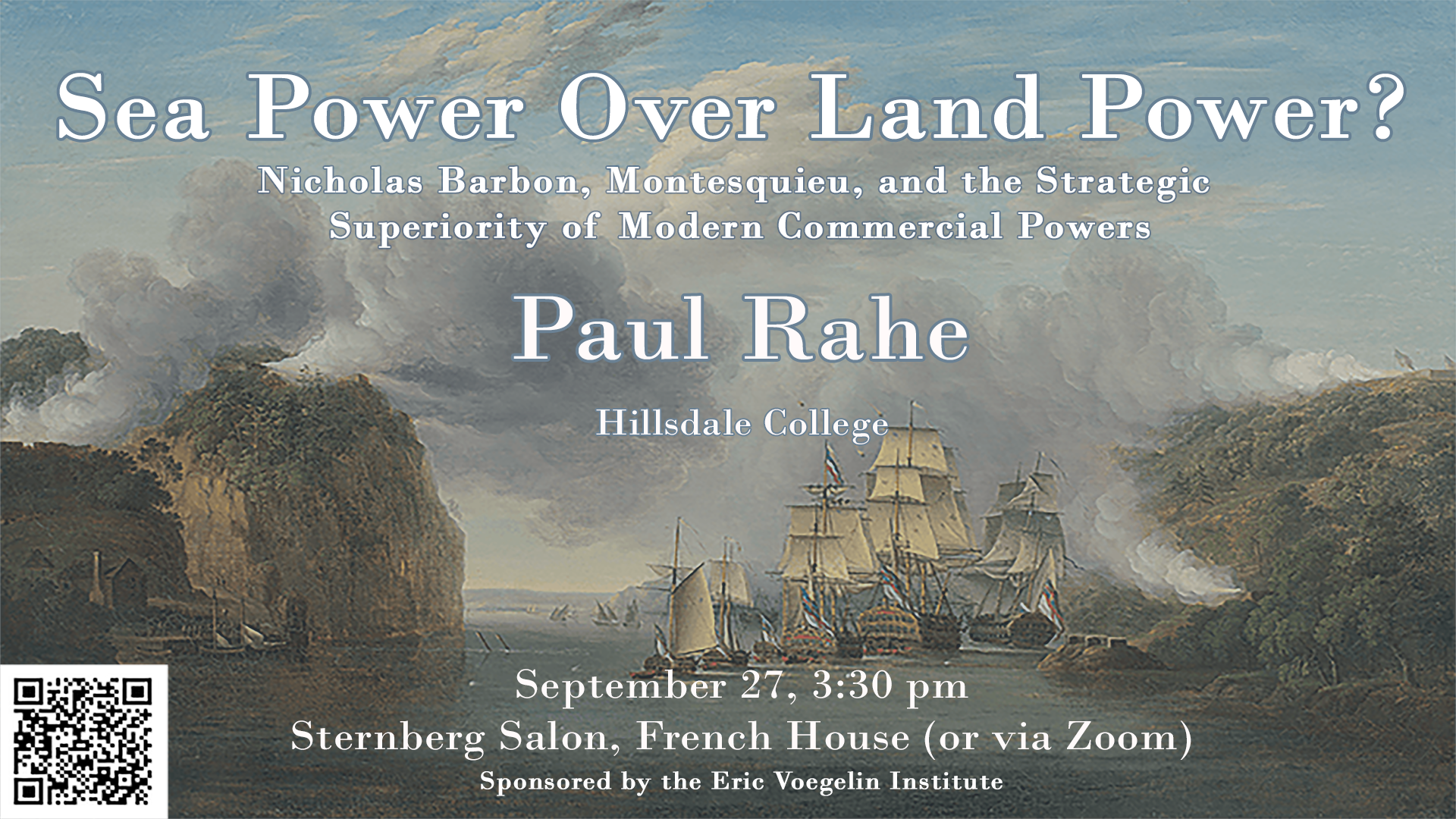 09/23/2021
BATON ROUGE – Professor Paul Rahe of Hillsdale College will deliver a lecture on “Seapower Over Landpower? Nicholas Barbon, Montesquieu, and the Strategic Superiority of Modern Commerical Powers” on Monday, Sept. 27, at 3:30 p.m. The lecture will take place in the Sternberg Salon at the French House and will be available simultaneously via Zoom. The lecture, which is free and open to the public, is sponsored by the Voegelin Institute. Please visit the Voegelin events page for Zoom registration.

Rahe is the Charles O. Lee and Louis K. Lee Chair in Western Heritage at Hillsdale College. He received his education from Yale University and Oxford University (as a Rhodes scholar). He has been awarded fellowships by the Center for Hellenic Studies, the National Humanities Center, the Institute of Current World Affairs, the John M. Olin Foundation, the Center for the History of Freedom at Washington University, the National Endowment for the Humanities, the Woodrow Wilson International Center for Scholars, Clair Hall at Cambridge University, All Souls College at Oxford University, the American Academy in Berlin, the Social Philosophy and Policy Center at Bowling Green University, and the Hoover Institution. He is the author of numerous books, including “Republics Ancient and Modern” and, most recently, four books on Sparta and its grand strategy with the Yale University Press.

“Rare is the historian whose erudition matches Paul Rahe’s, and rarer still one who is so attentive to political purpose and capacity,” said James Stoner, director of the Voegelin Institute.  “A master teacher as well as scholar, expert on the ancient world as well as the modern—and focused on the differences between them—Rahe is someone we’re very fortunate to have visit LSU.”

The Eric Voegelin Institute, named for one of LSU’s original Boyd Professors and a scholar of international recognition and acclaim, is located in the Department of Political Science at LSU.  A humanities and social sciences research institute dedicated to exploring the ideas and questions that animated Voegelin’s thought, its primary activities involve scholarship, lectures, and conferences centered around the revitalization of teaching and understanding the great works of civilization.