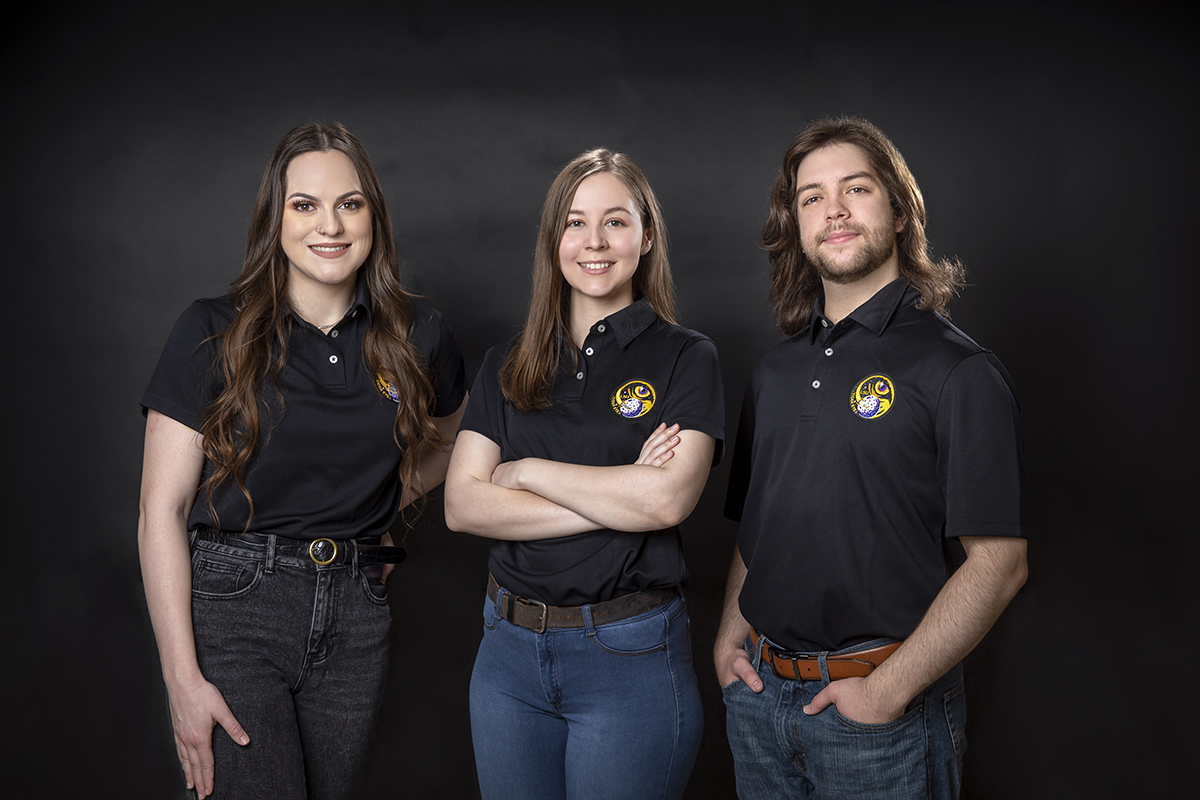 Haley Pellegrin, Katie Hostetler and Jacob Miller are helping to lay the foundation for humans to return to the Moon as early as 2024.

BATON ROUGE – This school year, a record number of LSU students received national scholarships and recognitions, and one group of students is lining up LSU to be the first university in the world to put technology on the Moon.

From Baton Rouge to the moon, LSU students are breaking records and making history with scholarships, fellowships and research recognitions.

“In every field and at every college on the LSU campus, our incredible students are competing on the national stage for prestigious scholarships, conducting groundbreaking research that has real-world impacts, and preparing themselves for immensely successful careers,” said LSU President Tom Galligan. “Our first-class academic offerings and research opportunities is driving record enrollment, retention, and graduation of the best and brightest students at LSU.”

Truman Scholar:
Mia LeJeune, a native of Lafayette, La., was awarded the 2021 Truman Scholarship becoming LSU's 13th recipient of the prestigious fellowship opportunity. LeJeune was selected from a pool of 845 candidates nominated by 328 colleges and universities.

Truman Scholars are selected based on their ability to demonstrate outstanding leadership potential, a commitment to a career in government or the nonprofit sector, and academic excellence. As an Ogden Honors student studying political communication at the Manship School of Mass Communication, LeJeune has discovered her passion for combating voter suppression. 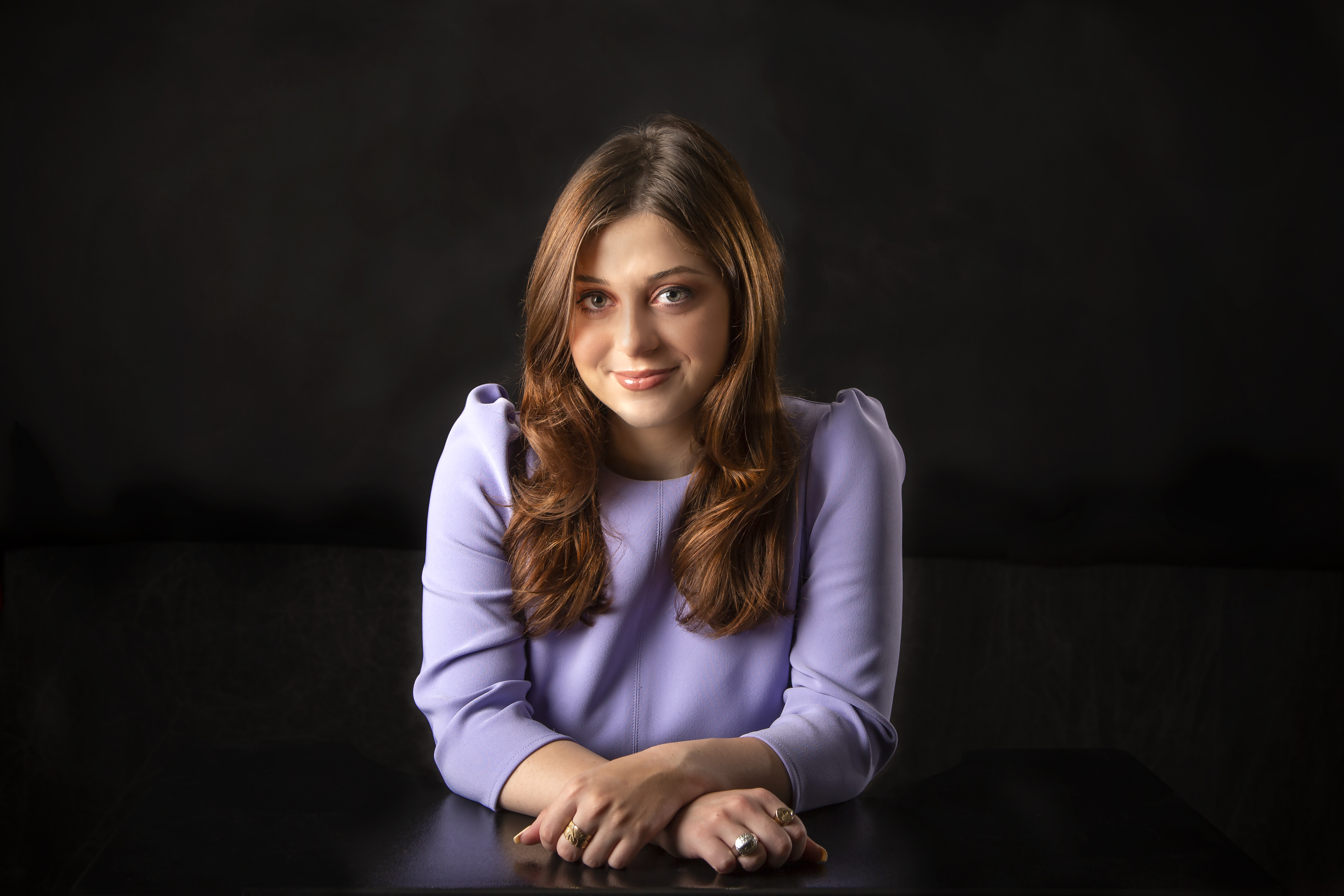 Each Truman Scholar receives funding for graduate studies, leadership training, career counseling, and special internship and fellowship opportunities within the federal government. LeJeune hopes to work with the National Democratic Institute, or NDI, through the Truman Foundation’s Summer Institute.

The Scholarship Program honoring Sen. Barry Goldwater was designed to foster and encourage outstanding students to pursue research careers in the fields of the natural sciences, engineering, and mathematics. This year the Goldwater Foundation awarded 410 scholarships, selecting from a pool of 1,256 outstanding undergraduates nominated by 438 institutions.

Knight-Ennessy Scholar:
Taylor Goss, a Lacassine, La., native, was selected for the 2021 cohort of Knight-Hennessy Scholars, making him the first such scholar in LSU’s history. Goss entered LSU as one of 10 Stamps Scholars – the highest academic scholarship at LSU. 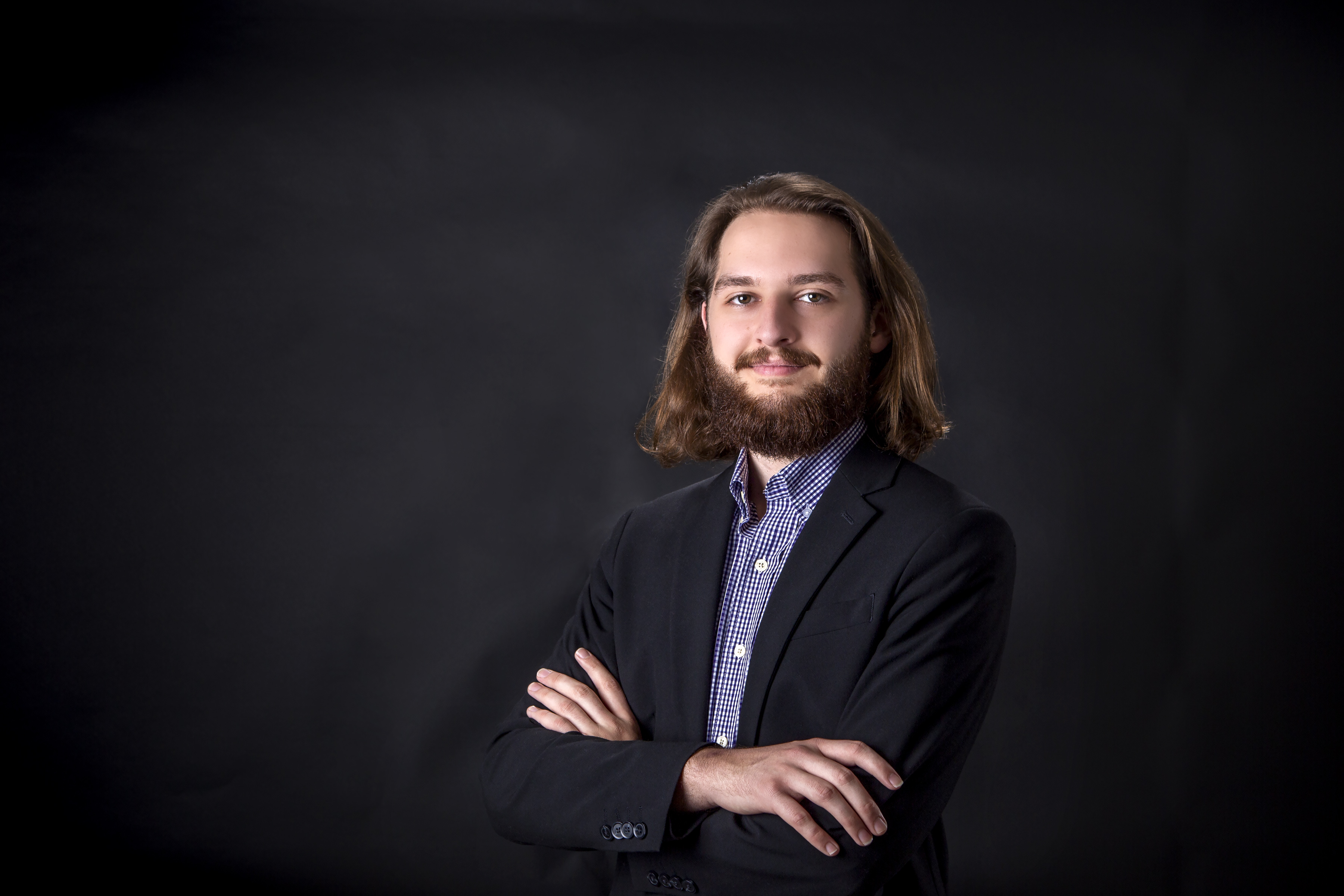 Lacassine-native Taylor Goss was selected as the fist ever Knight-Hennessy Scholar from LSU.

An Ogden Honors student, Goss is pursuing dual degrees in music and entrepreneurship, and he was selected as a Louisiana Service and Leadership, or LASAL, Scholar, which is designed to address issues affecting Louisiana, such as poverty and coastal wetland loss.

This year’s cohort consists of 76 new scholars, with students from 26 countries, pursuing degrees in 37 graduate degree programs across all seven of Stanford’s graduate schools. Goss will be pursuing a master’s degree in music, science, and technology at Stanford School of Humanities and Sciences. Goss aspires to connect musicians and policymakers, using the arts to communicate societal needs and provoke policy change.

Udall Scholar:
Alexia LaGrone, a native of Lafayette, La., was named a Udall Scholar by the Morris K. Udall and Stewart L. Udall Foundation. The natural resource ecology and management junior was one of 55 students from 42 colleges and universities to have been selected as 2021 Udall Scholars.

LaGrone, an Ogden Honors College and College of Agriculture student, is a Louisiana Service and Leadership, or LASAL, and Stamps Scholar.

A 20-member independent review committee selected this year’s group of Udall Scholars on the basis of commitment to careers in the environment, Tribal public policy, or Native health care; leadership potential; record of public service; and academic achievement. Each scholarship provides up to $7,000 for the Scholar’s junior or senior year. Since the first awards in 1996, the Udall Foundation has awarded 1,788 Scholarships totaling over $9.1 million. 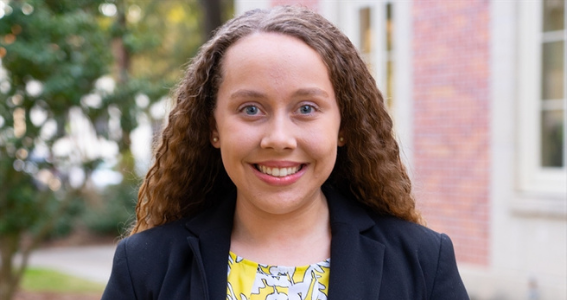 Critical Language Scholar:
LSU freshman Bridget Seghers, a native of Covington, La., was awarded a U.S. Department of State Critical Language Scholarship, or CLS, to study Swahili during this summer. Seghers is a Roger Hadfield Ogden Honors College and College of Agriculture student, majoring in animal sciences with a concentration in science & technology. She will graduate from LSU in May 2024.

Seghers was selected from a diverse pool of over 4,600 applicants, representing all 50 states, the District of Columbia, Puerto Rico, Guam and the Northern Mariana Islands. Finalists represented 628 different higher education institutions across the country, including 151 Minority-Serving Institutions, 14 Historically Black Colleges and Universities, and 57 community colleges.

The CLS program is part of an intensive effort by the U.S. Government to expand the number of students studying 15 world languages deemed vital to America’s security and economic standing. CLS plays an important role in preparing students for the 21st century’s globalized workforce and increasing national competitiveness.

Astronaut Scholars:
LSU students Brianna Robertson and Henry Kantrow were awarded the 2020 Astronaut Scholarship, which recognizes the best and brightest minds in STEM who show initiative, creativity, and excellence in their chosen field. 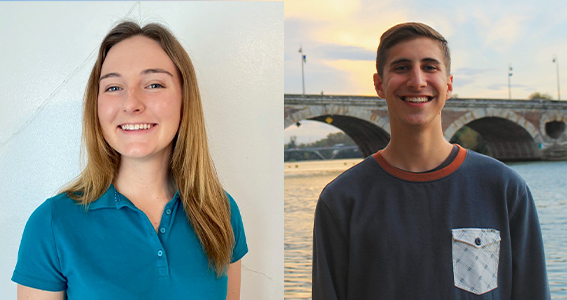 Robertson, a junior physics and computer engineering major from Slidell, La., has been conducting research with Jin-Woo Choi to develop an end-to-end automated system using neural networks for the physical layer of telecommunications in software-defined radios, which will lead to better in-space communication.

Kantrow, a junior chemical engineering major from Baton Rouge, La., has been conducting research on the design and installation of an ultra-high vacuum motor and, more recently, the fabrication of ultra-smooth 2D Ag films for plasmonic applications under Kevin McPeak. 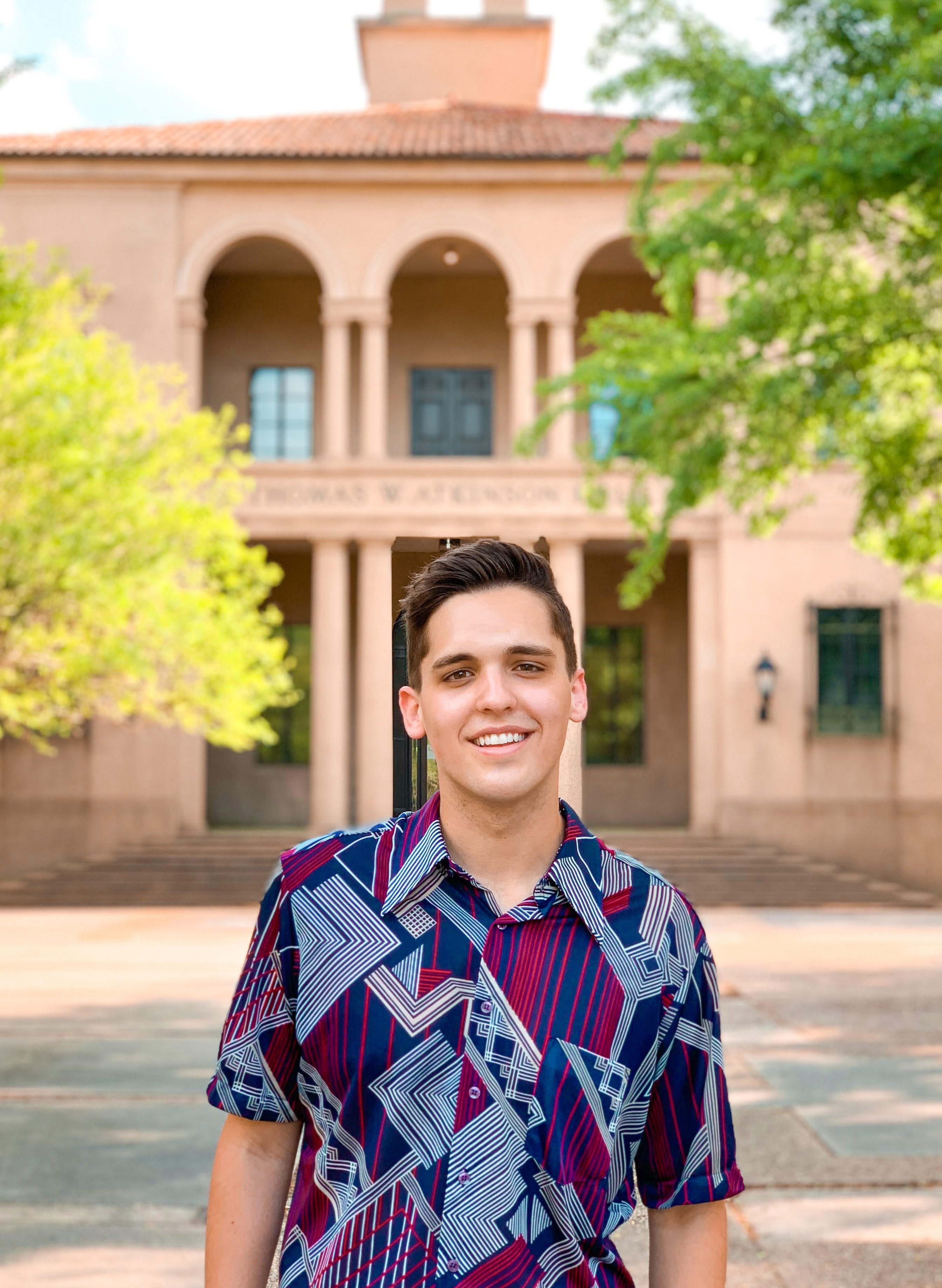 Covington-native Jacob Lyons won an Association of Collegiate Schools of Architecture award for his work on the Plank Road redevelopment master plan.

This year, recent LSU graduate Jacob Lyons from Covington, La., received an ACSA award for his work drawn from the Plank Road redevelopment master plan, which was developed by BuildBR, in one of Baton Rouge’s historic yet economically neglected parts of the city. Lyons designed an educational urban food plaza with a community garden center, public park, farmers market and micro-culinary school to emphasize healthy cooking and propagation of local fish and vegetation, which he named Pesce Plaza.

Broussard, a native of New Iberia, La., was named winner of the 2020 PRSA Axia Public Relations Scholarship, a prestigious $2,000 scholarship awarded to college juniors or seniors for demonstrating experience and passion for public relations and dedication to professional ethics and excellence, as well as financial need. Broussard also won the Public Relations Association of Louisiana’s William Michelet Scholarship for her proficiency in the field of public relations with a strong commitment to community involvement. Broussard is pursuing a bachelor’s degree in mass communication with a concentration in public relations and a minor in business administration.

Edmonson, a native of Denham Springs, La., was named one of only two winners of the 2020 PRSA Diversity Multicultural Scholarship, a prestigious $1,500 scholarship awarded to minority college juniors or seniors for outstanding academic achievement and commitment to the practice of public relations. Edmonson, who is pursuing a bachelor’s degree in mass communication with a concentration in journalism and minors in international studies and communication studies, is an active member of numerous LSU organizations, including PRSSA at LSU, the National Association of Black Journalists, the LSU Black Caucus and Black Women’s Empowerment Initiative.

To the Moon:
Next year, LSU will be the first university in the world to put technology on the Moon. The Tiger Eye 1 research mission is part of a multi-disciplinary university-industry collaboration to make future space travel safer for people and equipment by providing insight into the complex radiation environment in space.

Students in five different LSU colleges and schools are leading the charge under the direction of Assistant Professor Jeffery Chancellor in the LSU Department of Physics & Astronomy, head of its Space Radiation Transport & Applied Nuclear, or SpaRTAN, Lab. All are undergraduate seniors from Louisiana:

NSF’s five-year fellowship includes three years of financial support including an annual stipend of $34,000 and $12,000 to cover tuition and fees.