Bringing Academic Writing Back Down to Earth 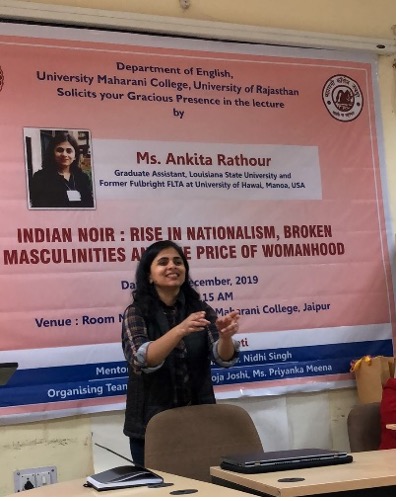 Ankita Rathour is passionate about her work, which analyzes the ‘dead girl’ trope in Bollywood and Indian crime fiction. Even when she’s studying fiction, Ankita directs her reader’s attention to what’s happening in the real world. As a teacher, she tries to get students to develop critical thinking skills that take underrepresented perspectives into account. Home for Ankita is Begusarai, Bihar, India.

How has being at an American university impacted your work?

There has been a disconcerting rise in the Indian government’s violent suppression of dissent. So, if I would have tried to pursue this career back there, I do not think it would have been as easy as it is here. I have more freedom to pursue my academic interests here in America. Things are not perfect in America, but the academic culture is definitely more supportive for a woman like me who is vocally critical of the Indian government and is tracing right-wing rhetoric in her project.

You regularly publish in journalistic outlets. What do you like about journalism?

I believe academic writing needs to be more accessible and journalism helps! It helps me achieve an academic voice that’s more concrete and direct; I cannot write about Bollywood, Indian Crime Fiction, and gender violence without taking into account the lived experiences of Indian women. I also love writing opinion-pieces. And I enjoy the temporality of journalism, the thrill of coming up with a piece in a couple of days.

Tell us about the picture above.

This is from December 2019. I was invited to give a guest lecture at Maharani College, Jaipur--a last-minute decision and a product of collective feminist anger on Facebook, after a 26-year-old woman was gang-raped and brutally murdered in Hyderabad. I gave a talk on the rise of right-wing nationalism, its effect on Indian masculinity, and how women pay the price for the hateful macho nationalist rhetoric. Protests against the Indian government were erupting, and we feared right-wing disruption in the lecture. But we stuck to the plan, and the university did a great job ensuring our safety.

I am a cinephile, so, I will also recommend films too: Steve McQueen’s Hunger. It is a visceral examination of the brutality of colonialism in Ireland.