Solving Crime with Pollen, One Tiny Grain at a Time 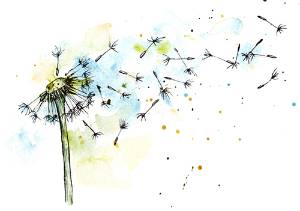 Do you have allergies? It's probably because of something called pollen.

During the spring, summer, and fall seasons, pollen—the powdery bits made by certain plants— is released into the air and picked up by the wind, which brings it to other plants to fertilize them. And inside of these pollen grains are proteins that commonly cause allergic reactions (such as sneezing, runny nose, and itchy eyes) when we breath them in.

Like miniature, silent witnesses, pollen and spores (spores are the single cells that grow into pollen grains) are too small to be seen by the naked eye, and criminals don't often realize that they have collected them from. a crime scene.

They can attach to almost any surface, like clothing, and become stuck like glue, which means doing laundry doesn't remove all the little bits of grain.

But in order to really understand pollen and how they can be used to track down criminals and solve crimes, we have to study them.

Palynologists are scientists who study plant pollen, spores and certain microscopic plankton organisms (in both living and fossil form!), and the scientists who use pollen and spores to solve criminal cases are known as forensic palynologists.

At LSU, palynologist Sophie Warny and her students conduct palynological research. Dr. Warny specifically likes to study pollen to solve mysteries of the past, and her research has taken her all over the world! She has studied pollen nearby in the Gulf of Mexico, in Columbia, North Africa, and even all the way in Antarctica! You can see some of her work from Antarctica on display in the LSU Museum of Natural Science.

One of Dr. Warny's former students, who also studied palynology, used her skills and understanding to do something a little different. While a student at LSU, Shannon Ferguson interned with the Department of Homeland Security, or DHS, in Houston, where she worked with head palynologist Dr. Andrew Laurence.

Shannon helped with an investigation that led to solving the mystery of missing Bella Bond, a young girl from Boston, Massachusetts.

As part of her internship, Shannon assisted in looking at the pollen that was found at the crime scene. What she discovered gave investigators their first clue in the case.

Shannon used tiny vacuum cleaners to suck up the pollen grains through a filter. After that, the samples underwent chemical processing to separate the pollen grains, and this is what Shannon and a team of scientists examined.

The pollen that Shannon found told investigators a story.

Because the pollen grains were so specific, the scientist was able to pinpoint a very specific geographical location where that pollen's plants grew in abundance.

Shannon was able to tell police to check out this location, which helped solve the crime!

Pollen can tell us so much by helping us solve plenty of mysteries (not just the criminal kind). Some scientists have used pollen to discover that flowers may have bloomed before dinosaurs walked the Earth! Pollen can even show us what different climates were like during our planet's different ages.

So it goes to show you—even something as teeny, tiny as a flower's pollen grain can help us solve gigantic problems.