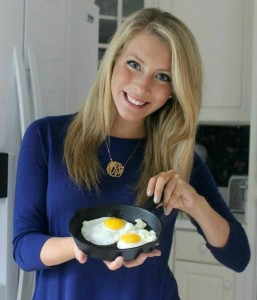 Football and fatty foods may go hand in hand for most fans, but senior biology major Monica Bravo hopes to cull the trend of unhealthy concessions with a paleo inspired alternative.

In 2013, Bravo launched Bravo for Paleo, a blog with an impressive catalog of paleo recipes and encouragement for those ready to explore the paleo way of life.

A few years ago, Bravo’s father, a triathlete and Crossfit regular was diagnosed with heart disease. After four stents and a pacemaker, Bravo and her family decided to reevaluate their eating habits and make lasting changes to impact their overall health.

“My father changed his diet to paleo immediately and I also got passionate about it because I began to see the food industry in a different way,” said Bravo. “I started with the paleo diet, but I also see why people are vegan or vegetarian. You have to see which one works best for you. My passion comes from helping people learn, helping people take control of their health and learning to create healthy food that tastes amazing.”

Bravo describes eating paleo as a diet without processed foods, incorporating local produce and little or no dairy.

“Many paleo followers say no dairy, but I say if you can tolerate it then dairy is perfectly fine. How a person defines paleo varies person to person, but this puts your body at a great set point and you can adjust based on your preference or state of health,” said Bravo.

Bravo for Paleo boasts an average viewership of roughly 200,000 or more, especially in January when dietary changes are among the top New Year’s resolutions. With such a significant number of views, Bravo realized that she was making a significant impact online, but wanted to do more in her community, particularly the LSU community. So, last fall, Bravo and Chef Robert Vasquez of Opal Basil Catering, partnered to develop a series of football friendly paleo foods to serve on game day. The duo began in the stadium concessions area, but most of the game attendees did not realize that they were there until they moved to a tent outside of the stadium.

“We changed the menu up each game to try out new things like trail mix, turkey burgers and chicken salad wraps. It was actually a really big success. We had lots of couples and families that would come to the tent because they had people in their families diagnosed with diseases that required a specific diet,” said Bravo.

Bravo will not be manning a tent this season, but she is advocating for the inclusion of healthy alternatives to the traditional “junk food” served at the games. Bravo said that LSU Concessions has been really receptive to having alternative concessions at the games and she has reached out to paleo vendors with the hopes that one will become a regular part of the Tigers’ concession options.

In addition to her successful blog, Bravo is also a senior majoring in biological sciences. She plans to go to medical school after graduation and use her passion for food as a way to help her patients manage their health through healthy eating.

“The blog is a creative outlet for me. I love doing it. Setting up the food photos—its like art to me,” said Bravo.

Blogging may be just a hobby, but Bravo plans to include her blogging and cooking experience into her long-term career.

“When I first started reading about food and nutrition, I already had a strong passion for science,” said Bravo. “Biology was my favorite subject. I loved learning about hormones and how different chemicals affect the body. I began to look at food as a different form of medicine, another way to heal the body.”

Bravo hosts a number of allergy friendly recipes for persons with celiac disease, gastrointestinal issues or those just looking to change the way they eat. By far, her most popular recipe is her chicken salad wraps, which uses dried coconut as a binder. Other favorites are blueberry muffins, twice baked sweet potatoes, and meatballs with almond flour.

With a smile, Bravo admits that she started a blog with little kitchen experience. Most of her recipes are revamps of her mother's meals.

“I would take my mom’s old recipes and modify the ingredients. I am also inspired by foods that I eat at restaurants and even foods that I should not be eating, but still love. I also take recipes that I may find on other blogs and recreate them in my own way,” said Bravo.

Bravo will be graduating in May and hopes to continue blogging.

“Medical school will be my main focus. I love cooking, but it is definitely a hobby. Science is my first and foremost passion, so when school is in, I only post on the weekend. Sometimes I may cook an entire day, take photos of the dishes and develop the posts,” said Bravo.

Bravo is grateful for the education that she is receiving at LSU.

“I chose LSU because of the people and the amazing biology program. I knew I wanted to major in biology, biochem or some kind of science,” said Bravo. “My ultimate goal is to go to medical school and I knew I needed the best undergraduate education that I could get.”

Staying in Louisiana was also vital to her decision to choose LSU. The Convington native wanted to stay close to home.

“I think it is important to educate people who plan to stay in Louisiana. I want to make a difference in my own community.”

You can follow Bravo on bravoforpaleo.com and you can also check out some of her favorite paleo ingredients at http://astore.amazon.com/braforpal-20 for.