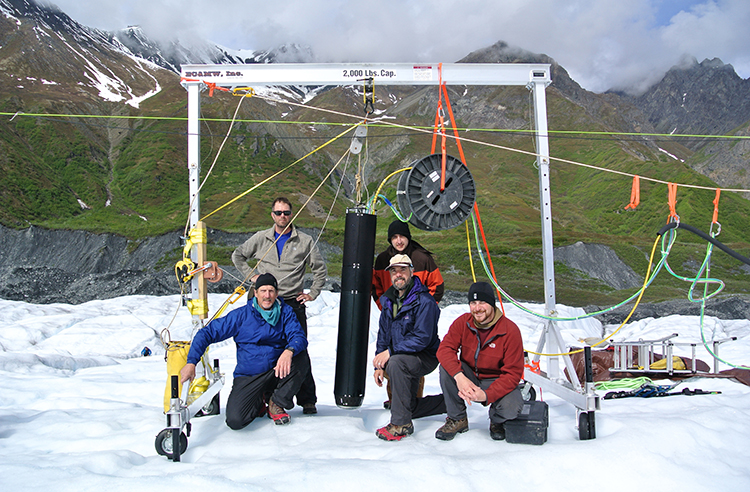 Bill Stone, founder of Stone Aerospace, (kneeling), and Peter Doran, LSU John Franks Endowed Chair in Geology & Geophysics, (standing), to left of Valkyrie which is an early prototype of a cryobot that could melt through thick Antarctic ice in search of life. In this picture they were testing Valkyrie on Matanuska Glacier in Alaska in July of 2014..Photo Credit: Stone Aerospace 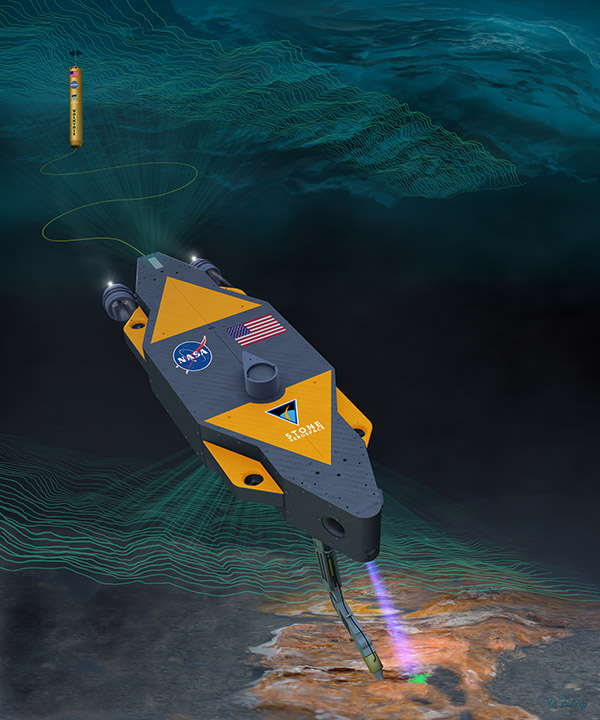 LSU geologist Dr. Peter Doran and founder of Stone Aerospace Dr. Bill Stone have assembled a diverse team of polar and planetary scientists to develop a state-of-the-art cryobot (an ice-penetrating robotic vehicle) to search for life in lakes and oceans under miles-thick ice in Antarctica. With nearly $3 million from NASA, the team will develop, integrate and field test SPINDLE (Sub-glacial Polar ice Navigation, Descent, and Lake Exploration), an autonomous cryobot that will melt through some of the thickest ice on Earth to access the pristine water beneath. SPINDLE will be the first cryobot system to carry a second stage hovering autonomous underwater vehicle (HAUV). The HAUV will conduct reconnaissance, life search and sample collection then return to the cryobot for subsequent data uplink and possible sample return to the surface.

The SPINDLE team has developed a three-phase plan that will deliver an integrated and field-tested system that will enable a possible future robotic life-detection mission to one of the ice-covered ocean worlds of the outer solar system. The current funding is for the first phase, which consists of defining the science questions and goals, performing lab tests and developing the basic design of the vehicle. One of the biggest design challenges is providing the energy to melt the ice.

“SPINDLE will partner with industry to develop one of the most powerful lasers ever built to send energy to the robot for melting through ice caps. The laser will be a surrogate for the compact nuclear thermal source that will be needed to run an outer planetary cryobot mission,” says Stone.

Subsequent project phases will focus on field campaigns with increasing complexity and boldness.  In the proposed Phase B, SPINDLE will penetrate the Ross Ice Shelf, Antarctica’s largest ice shelf, a thick mass of ice equivalent to the area of France.  In a final, daring mission, proposed as Phase C, SPINDLE will penetrate into a completely unexplored deep subglacial lake beneath the remote Antarctic plateau and deploy the HAUV to autonomously explore and search for microbial life without human guidance.

“SPINDLE promises to dramatically extend the state-of-the-art in autonomous exploration. If we are successful with this we will be in good shape to pivot towards a mission to the outer planet’s icy moons,” says Stone.

Doran, LSU John Franks Endowed Chair in Geology & Geophysics, will head SPINDLE’s science team, which is responsible for defining the goals of the mission, which instruments need to go on the vehicle, and how to insure that the vehicle doesn’t contaminate the pristine target environment. Doran brings more than 27 years research experience in the Polar Regions and will also manage SPINDLE’s field experiments and data archiving.

“As the science guy, one of my roles is to pull together the science team and decide which experts to bring in,” says Doran. “We want the team to be diverse with experts in glaciology, microbiology, engineering and planetary science. We need scientists who know how thick the ice could be on the outer planet’s moons and have an understanding of what it takes to get through it, among many other things.”

The success of this exploration not only relies on the scientists behind it, but also on a robust robot that can withstand the environment expected to be encountered on

icy moons, be flexible enough for a variety of missions, and have the intelligence to navigate changes in the environment and collect samples for scientific analysis.

“Essentially, we are trying to build a mini scientist to go out and explore places where humans can not go,” says Doran.

Stone Aerospace has developed a number of robotic systems for NASA over the last 14 years and all of them are key building blocks to the technologies required for SPINDLE. Stone’s team has developed ground-breaking cryobots and several generations of hovering and long-range under-ice autonomous exploration vehicles.

Doran and Stone have partnered on a variety of projects over the last decade. The two met at a NASA science meeting in Boulder, Colorado and since that time have had four proposals funded involving autonomous science conducted by mobile field robots.  One of those projects was a precursor to SPINDLE in which Stone Aerospace  built a long range sub-ice Autonomous Underwater Vehicle (AUV) known as ARTEMIS. Doran and Stone along with other team members recently spent four months in Antarctica, successfully sending that vehicle more than six miles under the McMurdo Ice Shelf to sample biogeochemical gradients and life under thick ice.

“We are using Antarctica as a test bed, so when we go to the outer planet’s icy moons we will have an understanding of what we are looking for, and what it takes to get through the thick ice and deliver a mobile undersea vehicle that can search for life in those environments. Our tests on Earth will help us follow the trail on the outer planet’s moons and hopefully, find something extraordinary, but until then, we’ll have to focus on extraordinary findings on Earth,” says Doran.

Doran will host the first of three science meetings for the project at LSU March 7-9, 2016.

“The science questions we want to answer on ice-covered ocean worlds – including how to autonomously search for life –  will drive the design of this bold mission. As a result of 60 years of research and development at NASA, we are at a unique point in time where we have the building blocks to create technology for discovering life off Earth” says Stone.

This work is funded through Grant Number NNX15AT32G from NASA’s Planetary Science Division.