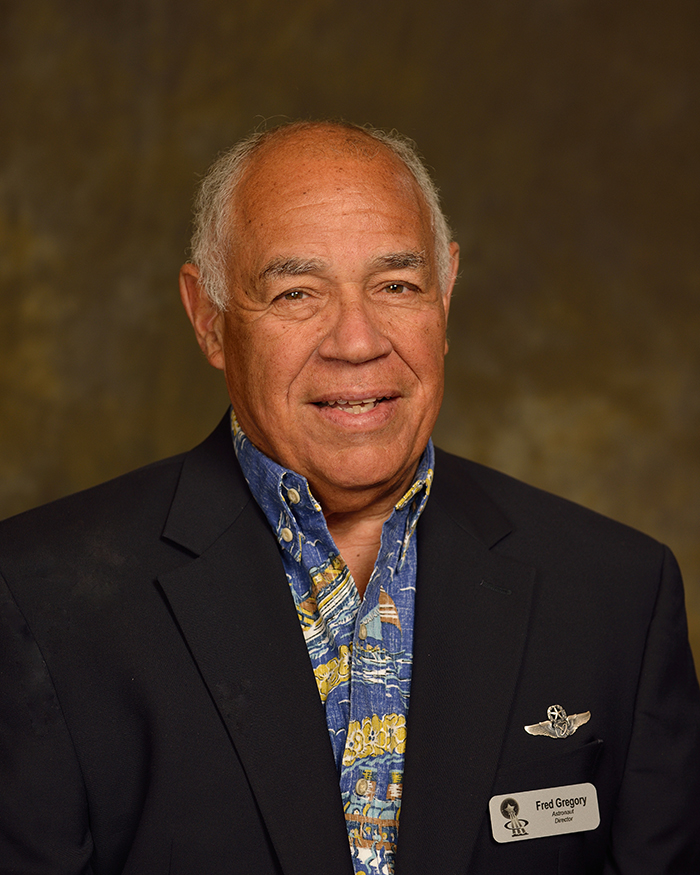 Retired US Airforce Colonel and NASA astronaut Fred Gregory will be visiting LSU on Friday, March 17th to present two high achieving students with the Astronaut Scholarship Foundation scholarship. This distinguished honor, created by the six surviving astronauts of Mercury 7, aims to encourage students to pursue scientific endeavors that keep the U.S. on the leading edge of technology.

Last year, LSU physics majors Harvey Shows and Amy LeBleu were among the top performing scholars to receive the ASF award, and Col. Gregory is making a special visit to LSU to recognize them for their achievements.

Col. Gregory  was inducted into the Astronaut Hall of Fame in 2004. He has extensive experience as an astronaut, test, pilot and manager of flight safety programs and launch support operations and has logged more than 450 hours in space as a pilot for the Orbiter Challenger in 1985, as spacecraft commander aboard Discovery in 1989 and as spacecraft commander aboard Atlantis in 1991.

Col. Gregory will present the ASF scholarship to Shows and LeBleau during a luncheon, Friday, March 17th at 11:30 a.m. in the LSU Faculty Club. He will also give a 20-minute talk about his experiences as a NASA astronaut.

About the 2016 ASF Scholars

Astronaut Scholar Harvey Shows from Covington, La., knew from a young age that studying physics was his calling. He began his college career at Southeastern Louisiana University and transferred to LSU after his freshman year. Shows says that it was the faculty and staff in the Department of Physics & Astronomy who encouraged him to excel within his field.

“While the work involved can be strenuous often leading to late nights and early mornings, the prize of finally ‘getting it’ cannot be overvalued. With each semester I become more and more confident that I am where I ought to be,” says Shows.

Shows has an extensive research background. This past summer, he conducted neutrino physics research at Indiana University. He has also participated in a quantum computing physics research experience sponsored by the NSF’s Robert Noyce Teacher Scholarship through the LSU GeauxTeach program in Math & Science. Shows has also worked as an undergraduate researcher in Associate Professor of Physics Kristina Launey’s research group where the work focused on nuclear structure theory. Launey is also the LSU faculty member who recommended Shows for the scholarship.

Shows will be graduating in December 2017 and plans to take off a semester before attending graduate school for physics in the fall of 2018.

Astronaut Scholar Amy LeBleu from Baton Rouge, La., has always been a huge space fan and was extremely excited about the scholarship when her mentor presented her with the opportunity.

LeBleu said receiving the scholarship felt, “Like my hard work in Physics was paying off. It’s a honor to be recognized, and I am elated to see where this opportunity takes me.”

LeBleu is a physics major with a concentration in astronomy and biochemistry, and a minor is psychology. She knew she wanted to work on manned space missions and the courses and undergraduate research experiences in the Department of Physics & Astronomy gave her a large advantage in the field.

LeBleu has contributed to a number of astrophysics projects, including work in the laboratory of LSU Ball Family Distinguished Professor in Physics & Astronomy Geoffrey Clayton. Her work focused on researching SN2007oc, a type II supernova, and the methods to model the amount of dust produced in the explosion. The internship was funded by the Sloan Digital Sky Survey. She also helped develop a program to determine if R Corona Borealis (RCB), a peculiar low-mass yellow supergiant star, can be found only from their spectrum. The program would also be able to scan the Sloan Digital Sky Survey catalog to find more RCB stars.

This past summer LeBleu participated in an internship at the Harvard-Smithsonian Center for Astrophysics where her work focused on a code for a rare quasar.

“These are highly variable quasars that have extreme changes in spectrum, suggesting that their accretion disks are either beginning to once again accrete or stop accreting. Accretion disks are not fully understood on any level—solar, planetary, nova, or quasar— so this is highly interesting,” says LeBleu.

LeBleau will be studying at Nottingham University this fall and plans to pursue graduate studies in astrobiology after graduation.

“This scholarship is important to me because I want to work with NASA. I think Space exploration is a critical part of the future of mankind, and this scholarship helps inspire me to work harder, and possibly smarter, so I can contribute more. It’s also reassuring to see what I have done as an undergraduate is considered useful. Sometimes in one’s scholastic career it’s hard to see if projects are actually useful, or just resume folder. Something like this shows that what research I’ve done is useful, and only the start of what I hope to be a productive career” said LeBleu.

About the Astronaut Scholarship Foundation:

For more than 30 years, the Astronaut Scholarship Foundation has supported hundreds of top performing students pursuing degrees in science, technology, engineering or mathematics. As a merit-based scholarship, candidates must be nominated by faculty of the participating universities based on their display of initiative, creativity and excellence in their chosen field.  To date, the ASF has awarded more than 400 scholarships totaling more than $4 million.