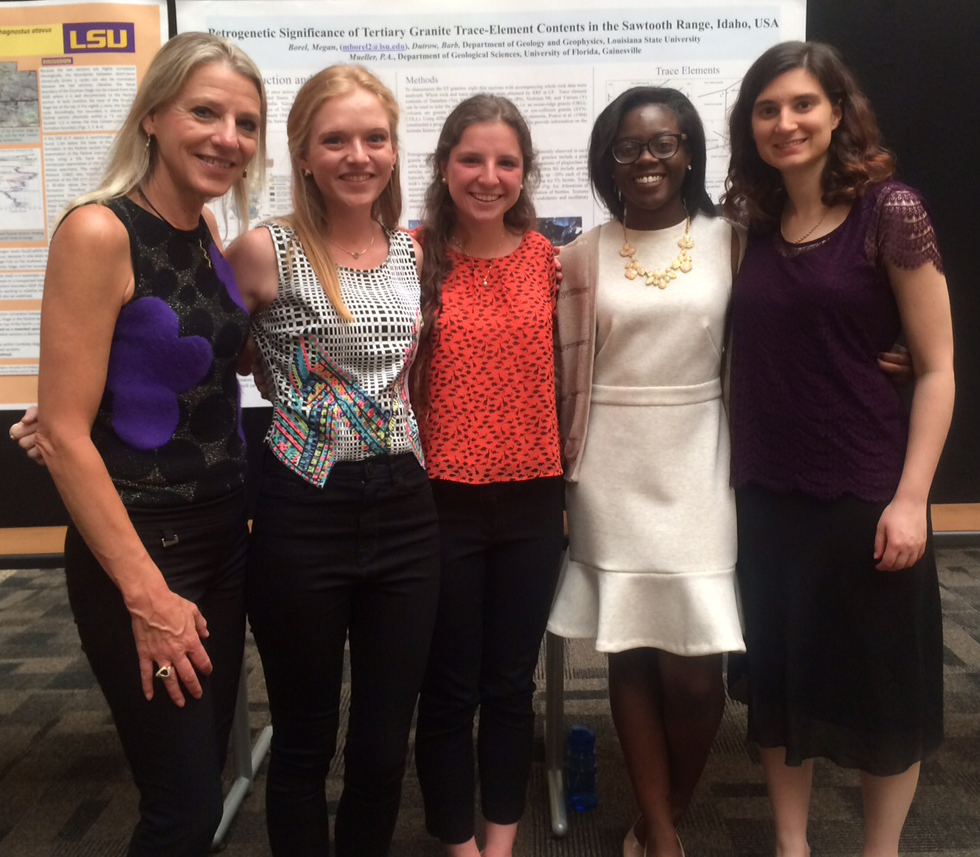 Barb Dutrow, Adophe G. Gueymard Professor in LSU’s Department of Geology & Geophysics, is the recipient of the 2016 Outstanding Educator Award from the Association for Women Geoscientists, or AWG. This is AWG’s premier professional award for women geoscientists honoring well-established women college or university teachers who have played a significant role in the education and support of geoscientists within and beyond the classroom, in advancing the persistence of females and underrepresented minorities in geoscience careers and in raising the profile of the geosciences by teaching to and for the broadcast audience of students.

Dutrow was cited for her contributions in all three of the areas considered for this longstanding career award: mentoring, instruction and curriculum, and outreach to the broader community. In the area of mentoring, Dutrow was cited for going well beyond the traditional responsibilities of a tenured professor at a research I institution by skillfully guiding many undergraduates through their first geologic research experiences, her mentoring of many female graduate and undergraduate students and for helping them to secure funding for their degrees and research projects. By way of outreach, she has created museum exhibits elucidating concepts related to gems and minerals to the broader public, has developed exhibits for the Tucson Gem and Mineral Show that reaches tens of thousands of people, works with her local LSU GeoClub to facilitate their outreach and has given over 250 lectures around the world.

Dutrow has had a dramatic impact on the teaching of mineralogy across the nation and the world. She has reorganized the course from the classic systematic mineralogy format to a format focused on the geologic environment of mineral formation: from the Earth’s core to crust. She has lead NAGT/On the Cutting Edge workshops on pedagogy as well as on specifics of subject material, published research articles on student spatial learning and visualization, and continues to share numerous teaching activities on-line through On the Cutting Edge, and has co-authored a leading and longest selling Mineralogy textbook, the 23rd ed. Manual of Mineral Sciences (Klein & Dutrow 2008), now translated into Portuguese. She also serves as the curator for the mineralogy and petrology collections of the Natural History Museum at LSU.

“This award is an incredible honor, in part because many of my former students nominated me for the award together with external collaborators. It is also humbling as there are so many excellent professors around the world who have shared their insights on best educational practices and their relativity with me,” said Dutrow

Her research interests span from continental-scale metamorphism to micrometer-scale crystallochemical interactions in minerals. Her research involving time transient 3-D computational modeling of heat and mass transport unifies these approaches and relates the influence of heat, fluids and fluid flow on the development and growth of minerals. Dutrow joined the faculty in the Department of Geology & Geophysics in 1992.

She was presented this award at the Geological Society of America meeting recently held in Denver. Several of her former students, in addition to colleagues, joined her for the event.