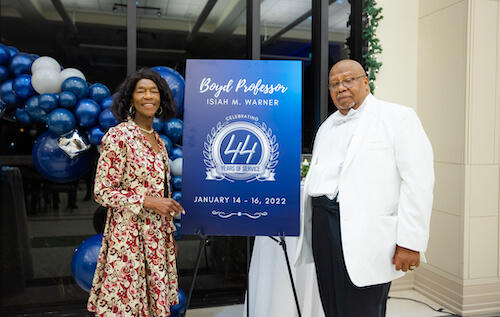 Dr. Isiah M. Warner and his wife Della at his retirement celebration.

Over the course of his career, Warner focused on researching fluorescence spectroscopy and, in the past two decades, has also dedicated his research efforts to the areas of organized media; separation science; and ionic liquid chemistry, particularly as applied to solid phase materials for applications in materials science and nanomaterials. This resulted in more than 380 refereed publications in several journals focused on analytical and materials chemistry.

Warner, who has been called a pioneer in his field of chemistry and a mentor extraordinaire within STEM, is the first—and only—African American Boyd Professor within the LSU System, which he received in 2000. In addition to his Boyd Professorship—the highest professorial honor at LSU—Warner has served as the vice president—previously titled vice chancellor—for strategic initiatives since 2001 and as the Philip W. West Professor of Chemistry.

“Professor Warner has been an inspiration to me long before I came to LSU,” said John Pojman, chair of the LSU Department of Chemistry. “I have been blessed to be his colleague.”

While Warner has greatly contributed to the field of chemistry, he has also conducted extensive educational research that focuses on mechanisms for maintaining and enhancing student education in science, technology, engineering and mathematics, with a particular emphasis on encouraging under-represented students, including women and minorities, to pursue terminal degrees in STEM.

Through his leadership and mentorship, the LSU Department of Chemistry has become the leading producer of doctoral degrees in chemistry for African Americans in the U.S. and leads in the percentage of women who receive doctoral degrees. Prior to Warner’s arrival at LSU, there were only six African American chemistry Ph.D. graduates in its 150-year history. Currently, there are nearly 100. In total, Warner has produced 68 Ph.D. and 8 M.S. graduates out of his research group—more than half of whom are women and more than a 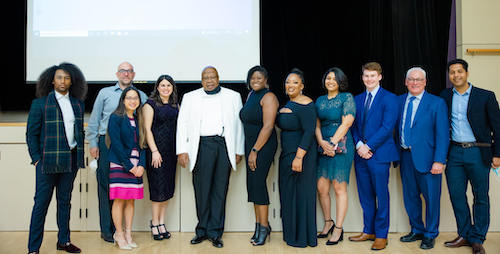 Dr. Isiah M. Warner surrounded by some of his graduate, undergraduate, and high school students.

Additionally, under his direction, the LSU Office of Strategic Initiatives (OSI) has generated nearly $50 million in funding to support LSU students and faculty. OSI has provided mentorship and holistic development to countless numbers of students across 10 programs from the high school to doctoral levels.

“Professor Warner’s impact on countless students, faculty, and staff has transcended far beyond his research group and LSU,” said Tyrslai Williams-Carter, assistant dean of mentorship, education & research in LSU’s Graduate School. “As a revolutionary pioneer, world-renown scientist, and extraordinary mentor, his ability to empower others is unparalleled.

“Having been personally mentored by Dr. Warner, both as a student and within my early career, I am eternally grateful to have benefitted from his wisdom, guidance, and support. Dr. Warner saw things in me that I sometimes did not see in myself. I am inspired by his ambition and the level of care and humility with which he operates. I know that his legacy will continue through the initiatives created and the individuals inspired.”

Throughout his career, Warner has received a plethora of awards and recognition. He was a recipient of the Presidential Award for Excellence in Science, Mathematics and Engineering Mentoring presented, which was presented by President Clinton, in 1997; in addition to the American Chemical Society Award for Encouraging Disadvantaged Students in the Chemical Sciences in 2003; and the Lifelong Dedication to Science, Education and Mentoring Proclamation, presented by Governor John Bel Edwards in 2016. 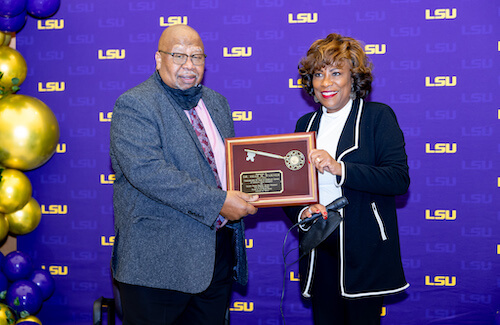 Upon his retirement, Warner was presented with several prestigious awards and recognitions. East Baton Rouge Parish’s Mayor-President Sharon Weston Broome presented Warner with a Key to the City of Baton Rouge, and Gov. John Bel Edwards provided an official statement of special recognition. Warner was also given a hand-written letter by Sen. Bill Cassidy; a congratulatory letter written by the American Association for the Advancement of Science’s (AAAS) Chief Executive Officer Sudip Parikh; and a resolution presented by Preston Castille, archon and president of local chapter of The Boule Sigma Pi Phi Fraternity. Warner also received a flag that was flown over the U.S. Capitol in honor of his retirement.

Additionally, the National Organization for the Professional Advancement of Black Chemists and Chemical Engineers (NOBCChE) presented a proclamation in honor of Warner’s retirement, while the LSU NOBCChE chapter presented him with an engraved gumbo pot—a nod to the professor’s infamous culinary skills and his GUMBOS research. Warner also received the LSU Black Faculty and Staff Caucus Lifetime Achievement Award, presented by Monique Cain, president of LSU’s Black Faculty & Staff Caucus; a Live Oak Endowment from the LSU Department of Chemistry; and congratulatory letters from Thomas Connelly, Jr., CEO of the American Chemical Society, and Robert H. Miller, Jr., dean emeritus of the College of Sciences & Engineering at Southern University and A&M College.

Several of Warner’s former students, Thomas Rossi, CEO of Venthera; Philip Oldham, president of Tennessee Tech University; and Greg Nelson with Abbott Laboratories, have pledged to give $50,000 in the professor’s name for a scholarship fund that provides support for minority STEM students.

A native of Bunkie, La., Warner received his Bachelor of Science degree from Southern University in 1968 and his doctoral degree from the University of Washington in 1977.