What Are the Healing Properties of Frankincense? 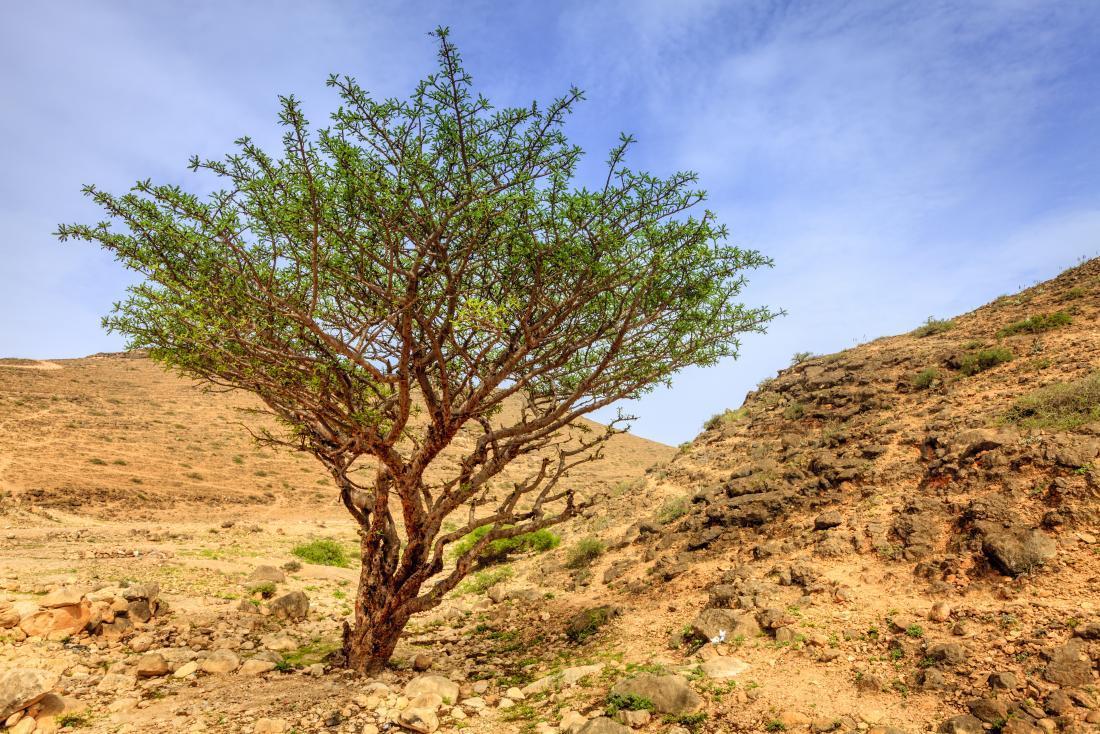 A Boswellia tree, also known as frankincense trees, growing in a desert near Salalah, Oman.

Frankincense, an aromatic resin, has long played a role throughout history. For more than 6,000 years, it has been traded on the Arabian Peninsula, as well as used in religious rites throughout Mesopotamia and the Eastern Mediterranean. Even noted in the Bible, the Three Kings of Bethlehem presented a new-born Jesus with three gifts: gold, myrrh, and, of course, frankincense.

But what is it about the resin obtained from various species of Boswellia trees that has scientists reexamining its properties?

In a newly published paper in Nature Chemical Biology, LSU College of Science researchers Marcia Newcomer, Erin E. Schexnaydre, and Nathan Gilbert, along with colleagues from the University of Jena in Germany, have clarified the molecular mechanism behind an anti-inflammatory effect of a natural product found in the frankincense resin.

“The exciting thing about the work is it suggests a strategy for the development of an anti-inflammatory that works by promoting the production of mediators that trigger the resolution of inflammation,” said Newcomer. “By looking at the structure of the complex it makes with the enzyme (5-lipoxygenase), it may be possible to design a compound that makes similar interactions, but is more easily taken up by the cell.”

The researchers discovered that the enzyme 5-lipoxygenase plays a key role in the effect of frankincense. The natural product reprograms the normally pro-inflammatory enzyme into an anti-inflammatory protein. For the first time, the team of scientists have been able clarify and image the crystal structure of the enzyme with bound inhibitors.

Prior to the discovery, the study involved combining the enzyme 5-lipoxygenase with various natural products and analyzing the resulting complexes. What they saw was surprising when using the acid from the frankincense resin. While many of the natural products selected for the study seemed to prevent the enzyme’s function by attaching to its “active site,” the boswellic acid binds in a separate area, leading to the observed structure changes.

The binding creates what appears to be similar to a domino effect by producing anti-inflammatory substances rather than pro-inflammatory. These findings can be the foundation for later development of drugs aimed at treating inflammatory diseases, like asthma.

“Inflammation and its resolution are very complex processes with many players and understanding how these players ‘talk’ to each other is a major challenge,” said Newcomer. “Two key advancements that laid the foundation for this work are our collaborators construction of a cell culture system that allowed us to quantify the impact of the compound and our—Nathan Gilbert's—success at engineering a form of the human enzyme that we could study with powerful techniques in structural biology.”

As for next steps, Newcomer said the team will begin working on two human lipoxygenases—targets for drug design that play roles in cardio vascular disease. “The enzymes are very similar, and use similar ‘machinery’ for the reactions they promote. For a drug to be effective, it should be specific for only one of these enzymes. We are trying to understand the subtle differences between these enzymes so that this information can be exploited in the development of novel therapeutics.”