LSU biologists are unlocking photosynthetic technologies in algae and plants to “teach” important crops such as rice, wheat, and soybeans to grow bigger, faster. 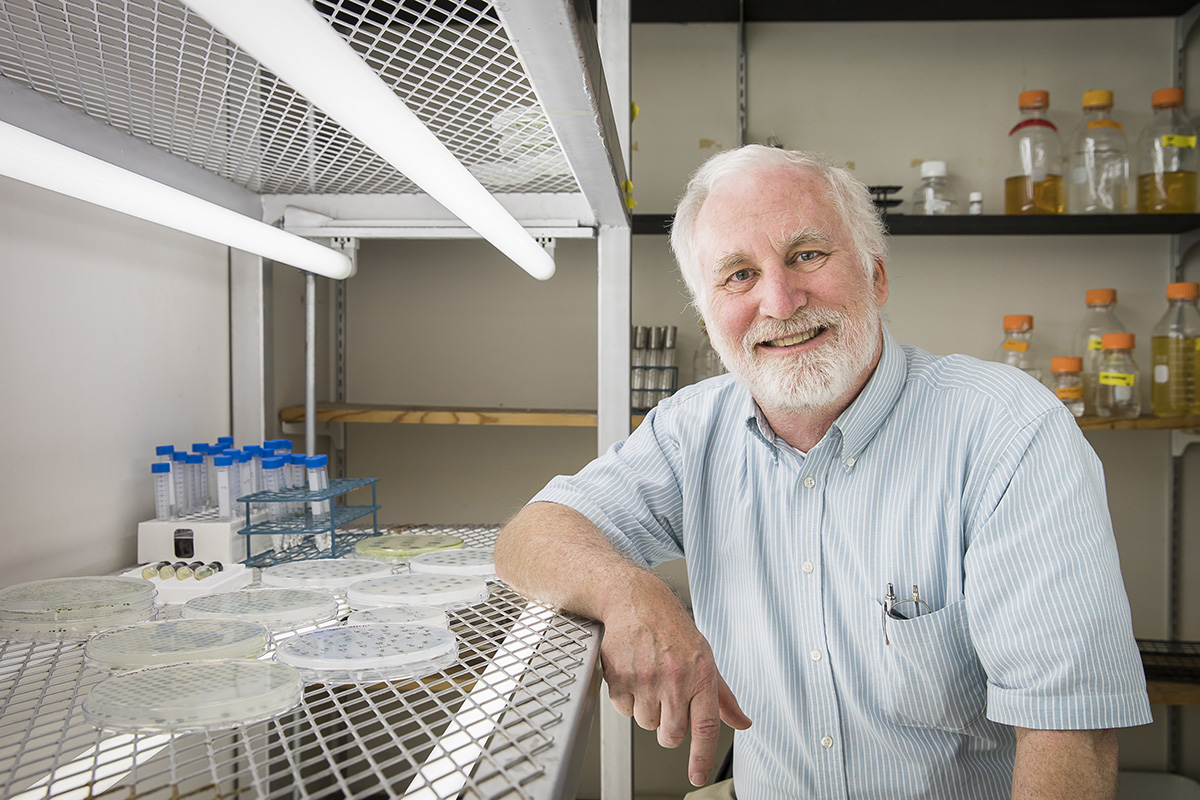 James Moroney in his lab.
LSU

When he’s not teaching freshman biology to 250 students, LSU scientist James Moroney continues a 35-year mission to save the world in other ways. He and his colleague Paul South study photosynthesis—the main driver of life on our planet. Through photosynthesis, plants make food for most life forms, as well as oxygen and fuel. All they need is sunlight and water, and plants can take carbon dioxide from the air and introduce it to an enzyme called rubisco—the most abundant protein in the world—to create organic matter. This means food for everyone, either directly (you eat the plant) or indirectly (you eat the animal that ate the plant, or the animal that ate the animal that ate the plant, and so on).

The problem with photosynthesis that Moroney and South are trying to solve is that it can be a glitchy process. Rubisco is an ancient enzyme that is, well, getting somewhat confused. Instead of grabbing a carbon dioxide molecule from the air, it occasionally takes an oxygen instead—every four or five times. This might not sound like a big deal, but instead of making organic matter (that is, food), the plant then makes something called glycolate, which pollutes the plant and needs to be cleaned up. To do so, plants evolved something called photorespiration, a kind of “oops machine” or recycling station. But it’s a complicated and exhausting process. Instead of having their recycling bin in their kitchen, so to speak, plants put the bin in their garage, on the other side of the laundry room, beyond the den.

After the so-called green revolution saved over a billion people from starvation between 1960 and 2005 thanks to research and technological advances in high-yielding varieties, irrigation, crop management, fertilizers, and pesticides, etc., mankind will likely need another revolution to boost yield in years to come.

To solve this problem, South engineered a recycling shortcut so plants don’t waste energy along with some of the carbon dioxide they’ve already processed and instead can continue to photosynthesize and grow. When he walked into the greenhouse in 2016 and saw for the first time that the plants he’d engineered were much bigger than the others, he knew he was on to something.

“I didn’t have to measure—I could see right away,” South said. “We had almost a 40-percent increase in plant growth. After that, it got really exciting. People were shocked at the amount of increase we observed.”

The goal of South’s and Moroney’s work of making photosynthesis more efficient is to help feed the planet in the future. The earth’s population is expected to reach almost 10 billion in 2050 and without innovation, many will go hungry. Meanwhile, because of our changing climate and because people also need somewhere to live, we’ll likely have less and less room for traditional agriculture. While Moroney so far has mostly worked on algae and South on tobacco plants, their idea is not to feed people algae pudding or dampen hunger with cigarettes. What they’re doing is learning about specific plant technologies from test plants that know a few tricks and also are easy to manage. Once they fully understand these technologies, they plan on transferring them into some of the biggest crops, such as rice, corn, soybeans, and cassava (used to make tapioca). South is about to start experimenting with black-eyed peas, which are commonly grown in sub-Saharan Africa. He hopes to start them in the lab soon, do greenhouse experiments next year, and then move on to field trials in 2022. 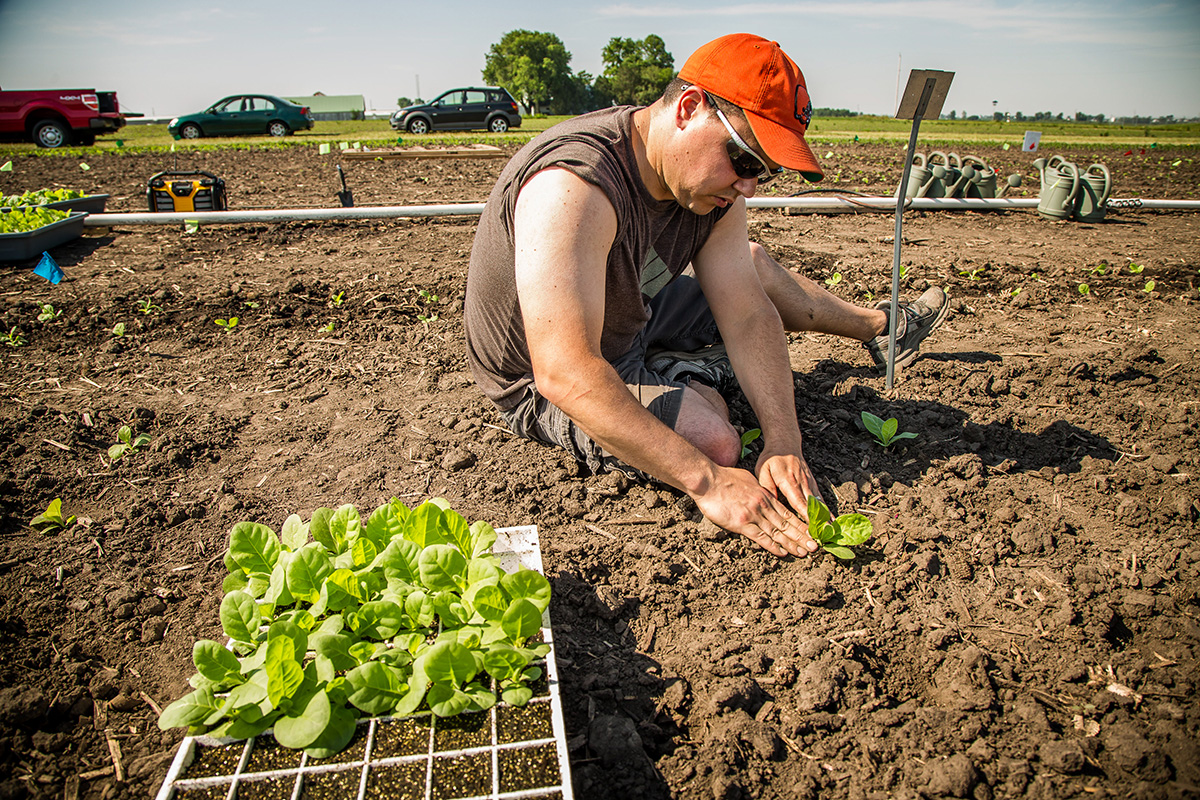 “The next question is how much of an increase we’ll see when we put this into crops,” South said. “But even if we only get a 10-percent increase in growth, this would still be a huge benefit and a lot more food.”

A big part of South’s work is educating people about genetically modified organisms, or GMOs. Many foods sold in grocery stores are advertised as being “non-GMO,” so the assumption is that GMOs are bad and something to avoid altogether. But that’s not true, South said. Everything he does as a researcher is to come up with better GMOs. After the so-called green revolution saved over a billion people from starvation between 1960 and 2005 thanks to research and technological advances in high-yielding varieties, irrigation, crop management, fertilizers, and pesticides, etc., mankind will likely need another revolution to boost yield in years to come.

“Climate change is happening faster than evolution can possibly keep up. We don’t have time to wait for plants to naturally evolve, so we’re going to need these tools to develop plants so we can have a nutritious and affordable food supply.”—Paul South

“I used to talk in great detail about the safety of GMOs and how what we’re doing in plants is very precise, but that’s hard to explain to non-scientists,” South said. “I’d get glazed looks on people’s faces, and that’s when I decided to take my scientist hat off and put my dad hat on.”

Wearing his “dad hat,” South focuses on how he wants safe, nutritious, and affordable food for his family, and how he sees GMOs as part of that equation. He’s the first to admit that most GMOs on the market today don’t necessarily benefit the consumer.

“Many GMOs on the market today are farmer-focused to help them address pests or weeds that threaten their yields,” South said. “But on the flip side, genetic modification is a technology we can apply to make crops more consumer-friendly by adding more nutrients, like vitamin A, or by increasing productivity to shrink families’ grocery bills one day.”

South is also quick to bring the potential benefit of his research on GMO crops into the context of climate change.

“Climate change is happening faster than evolution can possibly keep up,” he said. “We don’t have time to wait for plants to naturally evolve, so we’re going to need these tools to develop plants so we can have a nutritious and affordable food supply. The science is safe, and the potential for usefulness is really high. That’s why I tell people I love GMOs. It’s a newer technology that has the potential to benefit us in ways we don’t even understand yet.”

Part of South’s reason for joining LSU and working alongside Moroney is because he wants to study photorespiration in warmer climates where it occurs more frequently. The rubisco enzyme becomes even more confused at high temperatures, producing more glycolate and increasing the need for the “oops machine” to kick in. It is estimated that in crops like soybeans—especially here in Louisiana—summer temperatures can reduce photosynthetic efficiency by up to 50 percent because of photorespiration. This is also due to plants closing their leaves to save water when it’s really hot out. When they do that, they limit the amount of carbon dioxide they can access from the air.

In all fairness, rubisco evolved millions of years ago when the atmosphere was full of carbon dioxide and little to no oxygen. But since photosynthesis creates oxygen, rubisco has in many ways become a victim of its own success. 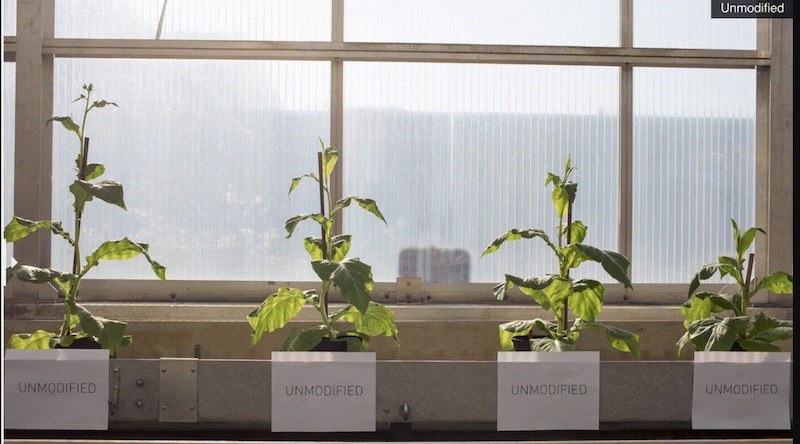 Modified versus unmodified plants; as Paul South re-engineered the plant technology, he noticed a remarkable increase in growth—up to 40 percent.
Animation courtesy of the RIPE Project/University of Illinois

“The importance of this work is becoming more obvious, I think. Mainly, it would be nice if we all can make it to 2100 without another World War. People get unhappy when they’re not fed.”—James Moroney

One of the reasons Moroney is so interested in algae is because algae have evolved to be quite good at photosynthesis in an environment (water) despite lower concentrations of carbon dioxide. So good, in fact, that half of the world’s photosynthesis is done by algae; they are a major component of the biosphere. But exactly how algae take carbon dioxide out of the environment and do so much more effectively than terrestrial plants became a complicated cell biology question.

“I would have told you, when I started working on this 35 years ago, that in five years, I’d be done with this research,” Moroney said. “Yet, here I am. I’ve worked on the same project for 35 years. What started out as science fiction is still close to science fiction in that the potential payoff remains far off in the future, but Paul [South] is closer to saving the world than I am. He’s actually putting plants in the ground. You know, I considered retiring a few years back, but now I’m so glad I didn’t. We have a great team.”

Algae use what’s called a carbon dioxide-concentrating mechanism to make the molecules more accessible for the rubisco. While rubisco performs less well in warm waters, as on land, and the solubility of carbon dioxide in water goes down as temperatures rise—meaning, algae photosynthesis also suffers from global warming—terrestrial plants could still benefit from “algae technology.”

“The simplest explanation of what we do is we put proteins and genes from algae into plants on land to see if they’ll pull in carbon dioxide better,” Moroney said.

Back in 2011, Moroney was one of only a few scientists in the world who were studying photosynthesis from an efficiency perspective. He was invited, along with a dozen others from around the world, to the Bill & Melinda Gates Foundation to talk about their work and the possibilities they saw for future research. That meeting began Moroney’s (and later, South’s) involvement in the RIPE (Realizing Increased Photosynthetic Efficiency) project, funded with $25 million from the Bill & Melinda Gates Foundation and $20 million from the Foundation for Food and Agriculture Research and the U.K. Government’s Foreign, Commonwealth & Development Office. RIPE is one of the biggest plant science projects in the world.

“We fund the work of the RIPE team, including Dr. Moroney and Dr. South, because of the long-term potential of this research to transform the lives of millions of smallholder farmers who depend on agriculture to feed their families and earn an income,” Kathy Kahn, senior program officer at the Bill & Melinda Gates Foundation, said on the motivations behind their involvement.

Moroney and South work closely with researchers in Australia, England, and China and at two other universities in the U.S.—Illinois and Berkeley.

“The importance of this work is becoming more obvious, I think,” Moroney said. “Mainly, it would be nice if we all can make it to 2100 without another World War. People get unhappy when they’re not fed.”

“Photosynthesis is the most important biochemical pathway on the planet,” South said. “Every carbon molecule in your body probably passed through photosynthesis at some point. It’s the primary source through which we can use energy from the sun to make food for everything else. Talking about food security or insecurity, I’ve heard the comment—why not study cancer or heart disease or something like that to help save lives instead? My off-the-cuff reply tends to be that if we don’t have photosynthesis, we don’t have food, and without food we won’t live long enough to get cancer or heart disease, so we should probably start with the basics.”

James Moroney found a missing link in algal photosynthesis, offering a new opportunity to improve crop yields. Algae are much better at photosynthesis than plants, so crops have a lot to “learn” from them.

Paul South engineered a shortcut in plants to make photosynthesis more efficient. He is now working on transferring the technology to crops to make them grow bigger, faster.

Paul South is an assistant professor of plant physiology in the Department of Biological Sciences with a joint position at the LSU AgCenter.

James Moroney is the Glenda Wooters Streva Alumni Professor in the Department of Biological Sciences.