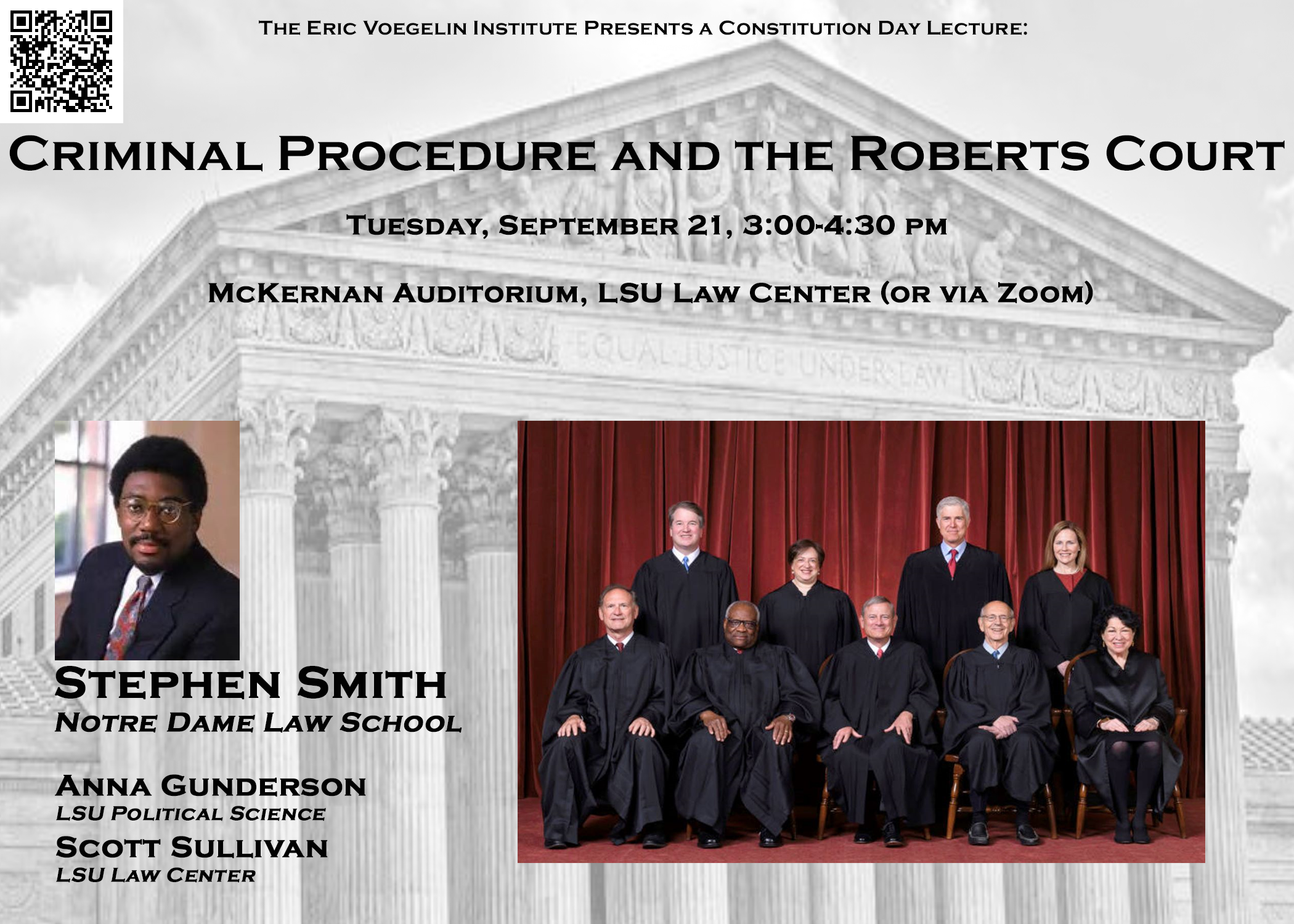 09/15/2021
BATON ROUGE — Professor Stephen Smith of the University of Notre Dame Law School will be delivering LSU’s Constitution Day lecture on Tuesday, Sept. 21, from 3-4:30 p.m. “Criminal Procedure and the Roberts Court” is his topic, and two LSU faculty members will serve as discussants.

The program will be held in the McKernan Auditorium at the LSU Law Center and will also be made available via Zoom (click here to register for Zoom). This event is sponsored by the Eric Voegelin Institute and is free and open to the public.

Smith is a professor at Notre Dame Law School, where he teaches courses on criminal law, criminal adjudication, and federal criminal law.  He earned his bachelor’s degree from Dartmouth College and his Juris Doctor from the University of Virginia Law School. After graduation, Smith clerked for Judge David B. Sentelle of the U.S. Court of Appeals for the D.C. Circuit and for Justice Clarence Thomas of the Supreme Court of the United States.  Before he came to Notre Dame Law School, Smith was the John V. Ray Research Professor at the University of Virginia. He also served as associate majority counsel to a 1996 House of Representatives select subcommittee investigating U.S. involvement in Iranian arms transfers to Bosnia and as an adjunct professor at George Mason University School of Law.

Commenting on Smith’s remarks will be Anna Gunderson, assistant professor of political science at LSU. Her book, "Captive Market: Accountability and State Prison Privatization," is forthcoming with Oxford University Press in February 2022. Also commenting will be Scott Sullivan, who holds the Harvey A. Peltier Professorship and J. Dawson Gasquet Endowed Professorship at LSU Law School. His research and teaching interests include International Law, International Human Rights, and the Administration of Criminal Justice.

“Stephen Smith brings fresh perspective and moral attentiveness to the all-important area of criminal law,” said James Stoner, director of the Voegelin Institute. “I predict his encounter with two of LSU’s experts on crime and punishment will yield a lively and enlightening exchange.”

The Eric Voegelin Institute, named for one of LSU’s original Boyd Professors and a scholar of international recognition and acclaim, is located in the Department of Political Science at LSU. It is a humanities and social sciences research institute dedicated to exploring the ideas and questions that animated Eric Voegelin’s thought. The Voegelin Institute’s primary activities involve scholarship, lectures, and conferences centered around the revitalization of teaching and understanding the great works of civilization.

From its founding in 1906, LSU Law has offered its students a legal education recognized for its high standards of academic excellence, an outstanding teaching and research facility, and integrated programs in Louisiana civil law and Anglo-American common law. Students at LSU Law are trained rigorously in the same common law and federal law subjects that are taught at other leading American law schools. The curriculum also reflects the LSU Paul M. Hebert Law Center’s role as a curator of the civil law. For more information, please visit www.law.lsu.edu.