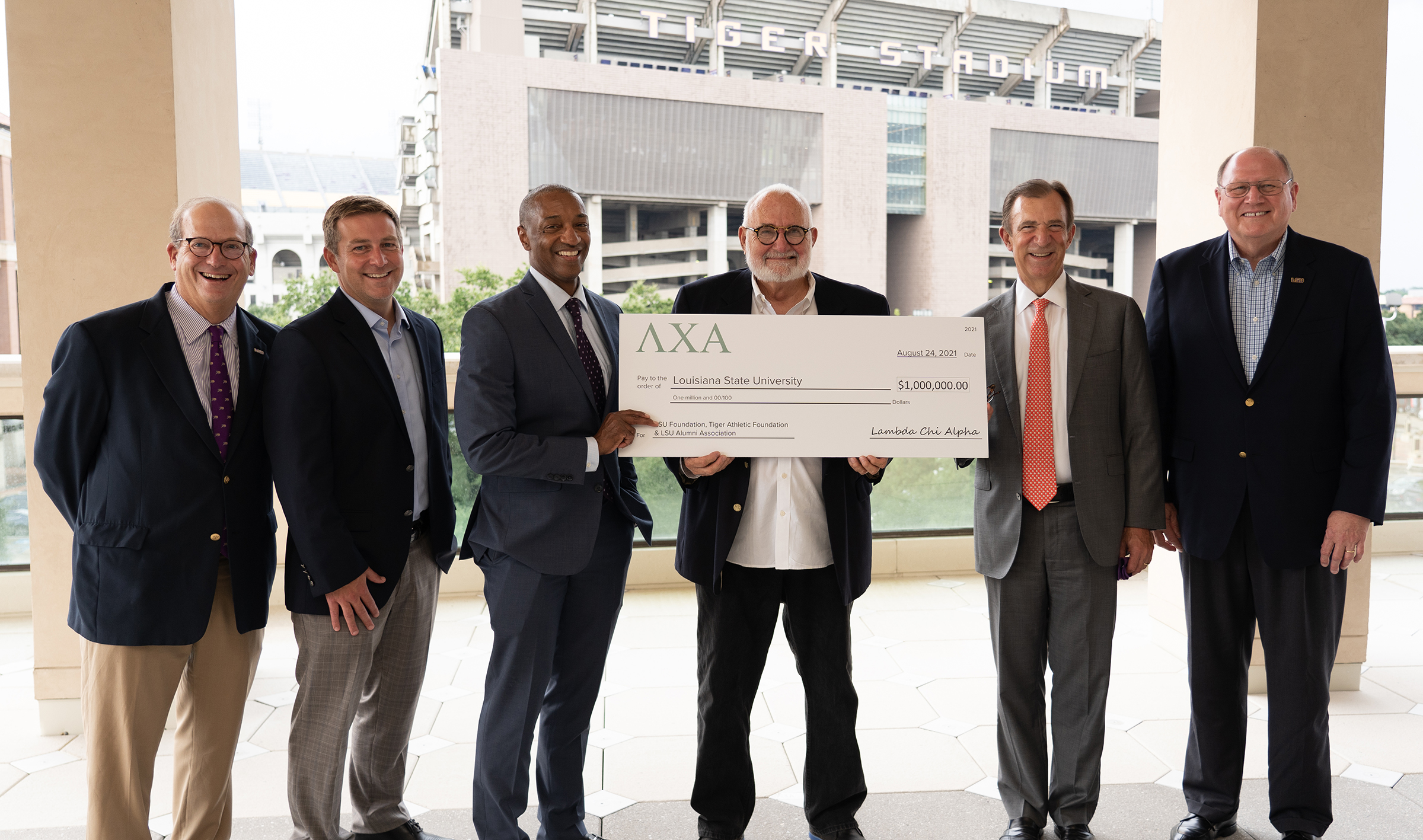 09/08/2021
BATON ROUGE – Alumni of the LSU chapter of Lambda Chi Alpha have made a $1 million gift through the LSU Foundation, LSU Alumni Association and Tiger Athletic Foundation in support of LSU students.

Funds for the gift became available after the sale of the LSU fraternity’s chapter house to another Greek organization. As the LSU alumni chapter considered how to maximize the impact of the proceeds from the sale, there was broad support from Lambda Chi Alpha alumni across many generations for the idea of directing the $1 million donation to advance LSU scholastics and the Tiger Athletic Foundation.

“This donation to LSU is a measure of how much our chapter’s alumni valued their experience at this university, both scholastically and socially, and what a huge impact that special time and the people who shared our journey here made on each of us,” explained Bill Fountain, president of the alumni chapter.

The chapter’s gift will establish a nearly $600,000 endowed scholarship within the LSU Foundation. The Lambda Chi Alpha Scholarship will be awarded annually to full-time undergraduate students, with preferential consideration given to descendants of Lambda Chi Alpha members. The gift also establishes a $50,000 scholarship through LSU Alumni Association and provides $100,000 to the LSU Alumni Fund, supporting the association’s initiatives to engage alumni in maintaining close ties to LSU. The $250,000 portion of the gift that is dedicated to the Tiger Athletic Foundation will benefit student athletes through the preservation of Tiger Stadium.

As part of the chapter’s gift through the LSU Foundation, two oak trees on campus will be endowed in recognition of the chapter’s appreciation for the impact of LSU and the fraternity in their members’ lives.

The LSU chapter of Lambda Chi Alpha Fraternity includes nearly 3,000 initiated members among its alumni. It was established on the flagship campus in Baton Rouge in 1914 and was the sixth chapter to be issued by the national organization of Lambda Chi Alpha. The fraternity has issued 320 charters to date on college campuses throughout the United States.

The LSU chapter of Lambda Chi Alpha alumni’s gift is part of the university’s $1.5 billion Fierce for the Future Campaign, the largest campaign for higher education in the history of Louisiana. Fierce for the Future unites LSU’s campuses statewide in pursuit of a common goal: to generate solutions for the people in Louisiana that hold the promise of making profoundly positive impacts around the world. To learn more, please visit fierceforthefuturecampaign.org.