“Welcoming the Other: A Conference in Honor of Cecil Eubanks” to be held April 30 to May 1 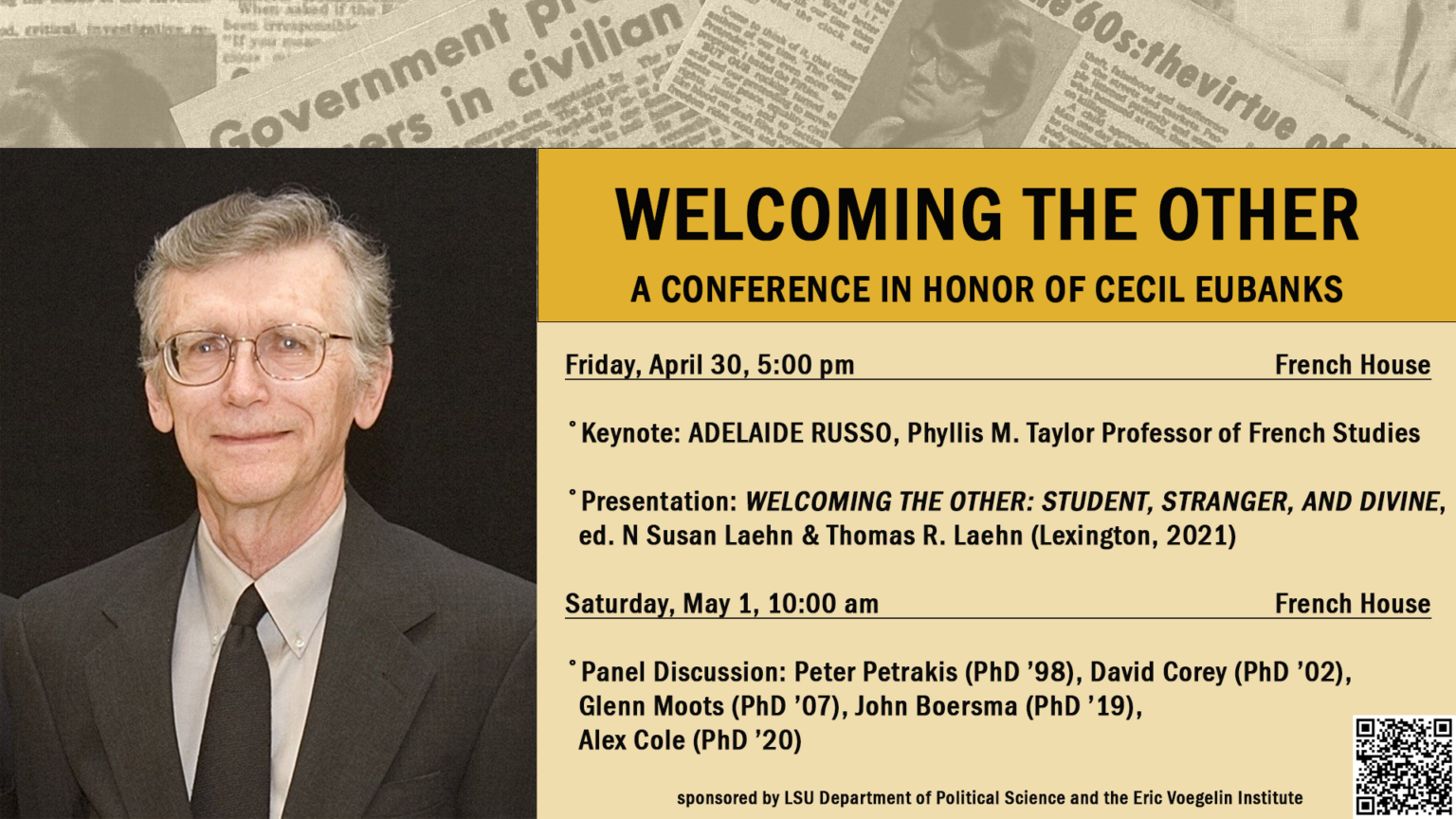 04/27/2021
BATON ROUGE – Alumni Professor Cecil Eubanks, who taught political science at LSU from 1968 until his retirement last December, will be honored by a conference this week at which he will be presented with a “festschrift” written by a number of his former Ph.D. students.

The event, scheduled for Friday, April 30, at 5 p.m., in the Sternberg Salon of the French House, is free and open to the public, though because of COVID restrictions guests must register beforehand at www.lsu.edu/voegelin/events. It will be webcast simultaneously on Zoom.

Titled, like the book, “Welcoming the Other,” the conference will begin with a keynote talk by Adelaide Russo, Phyllis M. Taylor Professor of French Studies; testimonials from several of Eubanks’ former students; presentation of a signed copy of the recently published book by its editors and many of its authors; and remarks by Eubanks.

On Saturday, May 1, the conference will continue with a panel including papers by five scholars who earned a Ph.D. at LSU under Eubanks’ direction or with his mentorship: David D. Corey (professor at Baylor University); John Boersma (University of Wisconsin postdoctoral fellow); Glenn Moots (professor at Northwood University); Alex Cole (instructor at LSU); and Peter Petrakis (professor at Southeastern Louisiana University).  he panel will also be held in the Sternberg Salon at the French House. Again, please register ahead to attend, at the website indicated above.

“It is hard to overstate Dr. Eubanks’ tremendous contribution to LSU’s educational mission,” said Robert Hogan, chair of the Department of Political Science.  “It is amazing how many LSU graduates I encounter who relay to me their fond memories of Dr. Eubanks’ classes, sometimes decades after they have graduated.  Students have great affection for him, and their experience in his classes has had an enduring impact on their lives.”

Eubanks came to LSU from the University of Michigan, where he earned his BA, MA, and Ph.D. degrees. Author of an analytical bibliography of Karl Marx and Friedrich Engels, co-editor of a book of essays on Eric Voegelin, and author of articles on Euripides, Hegel, Nietzsche, Reinhold Niebuhr, Albert Camus, Simone Weil, and much more. Eubanks served from 1988-1993 as co-editor of The Journal of Politics, one of the leading journals in political science. He chaired the department for a total of 10 years; most recently, he directed the LSU Ethics Institute.

Coming to LSU already as an award-winning teacher, he was honored at the university with no fewer than eight teaching awards and a Distinguished Alumni Professorship. Countless undergraduates and more than a dozen graduate students studied under his direction, and he played an integral role in mentoring many of the current faculty in the art of teaching.

Sponsoring the conference is the Eric Voegelin Institute, named for one of LSU’s original Boyd Professors and a scholar of international recognition and acclaim, a humanities and social science research institute devoted to the revitalization of teaching and understanding of the great works of civilization. Co-sponsoring the event is the Department of Political Science at LSU.