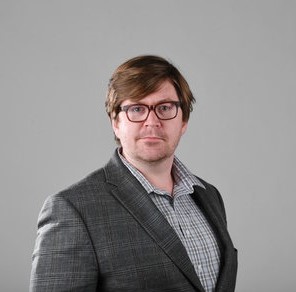 Degree: B.A. in English with concentrations in Creative Writing and Film

Tell us about your job and what you most enjoy.

I’m currently a features reporter with The Washington Post, where I focus on all aspects of culture. I’m also an author now. My debut book, Because He’s Jeff Goldblum, is a celebration of the actor and was published in April.

So many aspects of my job appeal to me. It’s difficult to narrow it down! I’d say what I most enjoy is the ability to become curious about something and then get paid to explore that subject, write about it and share it with others. I’ve always loved writing, and I’ve always enjoyed learning. My job allows me to marry those interests, all while – I hope – contributing to the greater good in some capacity.

Why did you decide to major in English?

I always knew I wanted to write for a living, and let’s be honest – not many of us are going to become famous novelists. So I decided to pursue journalism. I actually began my LSU career as a journalism major in the Manship School, and I worked at The Reveille throughout my time in college. Part of me, though, always wanted to be an English major, to study the stories that shaped our language, our cultures.

During an internship early in college, I met a successful journalist who told that if I worked at the school paper, then majoring in journalism was redundant. I was relieved and excited and immediately switched my major to creative writing, with a focus in film. I couldn’t be happier that I did.

How do you use the skills you developed in your English classes on a regular basis?

At its heart, journalism is a form of storytelling. All writing is. Majoring in English helped me focus on the various forms of storytelling, to learn how to craft a narrative – whether in a book form or in a 500-word article.

I also learned the foundational texts, which come in handier than you might think. It gave me a base knowledge of major touchpoints in literature and film, which has been extremely useful in my work as a features reporter and sometimes critic. And my wonderful professors — in particular, my hero Professor James Wilcox — helped me understand those texts, understand good writing. So many writers can succumb to their own egos, something I see fairly often. My professors taught me to adore the craft of writing, of literature, more than anything else. That’s a vital lesson.

What’s one of your favorite memories from your time at LSU?

I only get to choose one! That’s going to be tough. All the football games, all the nights at Highland Coffees writing, the evenings spent making deadline in the basement of Hodges, the (unnecessary) cheese fries at Louie’s at 3 a.m., the morning spent on the lake rowing with the crew team.

It’s impossible to choose, so I’ll say what I miss most: Walking around the lakes. My friend and fellow alumnus Sajid Qadri and I spent countless evenings exploring campus — you can find some crazy things around! — and then just ambling around those beautiful lakes, thinking of the future, figuring out ourselves, maybe carrying a red solo cup from time to time. There’s a certain freedom to that, one that disappears after graduation (to some degree). It’s a moment when everything in life is potential, and there’s something absolutely beautiful about that.

What advice could you provide to current and/or prospective majors?

Enjoy your time at LSU, because it’s over in a flash. I know that’s cliché advice, but cliches are cliché for a reason: They’re usually true. So, in terms of the cliché life lesson: Savor your time as a Tiger.

In a more professional sense, I would say it’s important to learn as much as you can from your professors and to understand that storytelling is a useful skill, regardless of your profession. I think a lot of English majors aren’t quite sure what they want to do professionally, which (in my view) is actually pretty useful. Don’t box yourself in just yet. If you want to be a writer, for example, it’s helpful to think of all the various forms of writing: journalism, legal writing, screenwriting, fiction writing, advertising copywriting, social media writing, etc. etc. As much as the world changes, one thing is irreplaceable: the humanity inherent in writing and storytelling. So soak that up as much as you can.