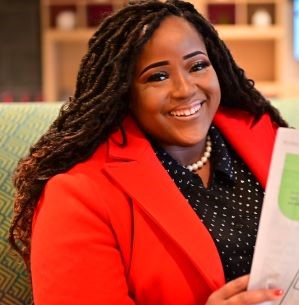 Tell us about your job and what you most enjoy.

I was admitted to practice in the State of Louisiana on October 22, 2015. Currently, I work as a Judicial Staff Attorney at the 19th Judicial District Court. I have been a Staff Attorney for over 5 years. I am also an assistant adjunct professor of law at Southern University Law Center where I teach Lawyering Process I and II and Advanced Legal Writing. I also run a small boutique firm where my practice areas are mainly intellectual property, personal injury, property law and family law. I am also working on a larger collection of poetry that I have written over the years which should be in production by the end of 2021.

The thing that I enjoy most about my jobs is the ability to be creative in my work as an attorney. I also enjoy helping and being of service to others and impacting the lives of others.

Recently, I was selected as one of the American Bar Association’s 2021 Top 40 Young Lawyers On the Rise Award. This prestigious award recognizes lawyers who are under the age of 40 and demonstrate extraordinary commitment to the profession and public service.

Why did you decide to major in English?

When I was four years old, I was writing in cursive and my kindergarten teacher told my mother that I was not allowed to write in cursive because the other students were not as advanced. I was not good at expressing myself verbally, so writing and reading were always safe spaces for me.  I can clearly remember writing full-blown arguments to my parents to get out being grounded, and most times, I won my case. Writing was always my thing. I wrote my first poem in 4th grade and since that time, I have been writing creatively ever since. During my junior and senior years of high school, I was involved with the Mock Trial Team at Caddo Parish Magnet High School. I was preparing for college and my coaches, Mr. William Kendig, Steve Soileau and Ms. Karen Soileau, told me not to major in political science, but major in English if I wanted to go to law school because I needed to know how to write. It was a no brainer for me. I majored in English and honestly, that was the best decision that I could have ever made.

How do you use the skills you developed in your English classes on a regular basis?

I am always writing and while legal writing is a technical style of writing it still allows creative license and artistry in making arguments. The first argument that a Judge sees in court are the arguments that are placed in the pleadings and if those arguments are poorly written it can impact the case. Even in making recommendations on cases, I am often tasked with crafting a ruling or reasons for judgments. Being an English Major has allowed me to cross over into the area of legal research and writing using some of the same skills that I acquired at LSU.  I often use the skills that I have learned as a professor who teaches Advanced Legal Writing. In argument whether orally or written, you must have a substantial amount of logical reasoning and creative license to your work. And since writing is my happy place, practicing the law through written and oral advocacy is natural for me.

What’s one of your favorite memories from your time at LSU?

There are so many memories that I have during my time at LSU and LSU Law as well. It’s hard to narrow it down to one specific memory, so I will just elaborate on four memories.

Four of my favorite memories at LSU was meeting my three college best friends:

Laura Briggs: Laura lived next door to me in the Pentagon and she knocked on my door and I refused to answer the first time, but I am so glad I answered.  We have been friends since August 2008 and I am the godmother to her son, Cade who lights up my world.

Broddrick Johnson: I met him on Campus Transit. We were riding to Highland Dining Hall and we have been friends ever since August 2008, we also lived in the Pentagon Stacks.  Broddrick is the best guy friend that a girl could ask for, he is one of my biggest supporters.

Katherine Euggino: I met Katherine through another friend in August 2008, and then it appeared that every time I would go to the restroom, she was also in the same restroom on campus and then we ended up in a Poetry class together. At some point, we decided that we were destined to be friends and we have been friends ever since. We have been in each other’s weddings and have been there for every significant life event.

My last and final favorite memory while at LSU was becoming a member of Delta Sigma Theta Sorority, Incorporated on April 23, 2012 with 19 other young women through the Iota Theta Chapter. My sorority was the first Black Greek letter organization chartered on the campus of LSU on May 7, 1972.

What advice could you provide to current and/or prospective majors?

The advice that I would provide to current and prospective majors is to take advantage of various courses within the department to find out what you truly love. English Composition is required, but there are other courses that can be invigorating such as Poetry, Screenwriting, Playwriting, Shakespeare, and other courses. I strategically took advantage of courses that I could write in, because while reading is fundamental and fun, there was nothing that topped writing. Writing is a non-judgmental task; it’s just you, the pen, and the paper—so be free.  Be free to give yourself opportunities to explore your talents and creativity. I am a living proof that your gifts will always make room for you.  Who would have thought that a young girl who wrote her way out of punishment would be a Judicial Staff Attorney, Trademark Lawyer, and Professor of Law? The possibilities are there, and the opportunities are there; you just have to seize them.