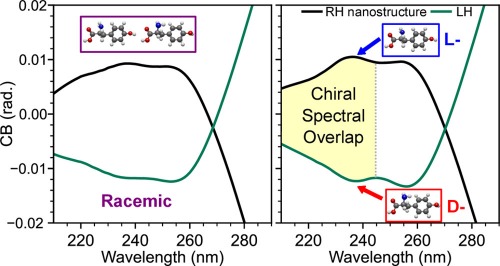 BATON ROUGE, LA – Researchers at LSU, in collaboration with Zuse Institute in Berlin, Germany, have developed an ultraviolet metasurface that discriminates between left- and right-handed amino acids with attomolar sensitivity.

“Detecting the handedness of dilute concentrations of biomolecules is a key step towards the early detection of many neurodegenerative disorders such as Alzheimer’s, Huntington’s, or Parkinson’s disease,” said LSU Chemical Engineering Associate Professor Kevin McPeak, lead author on the paper.

“What is unique about our work is that we developed an aluminum metasurface with chiroptical resonances that overlap with the bio-chiral signal. Developing metasurfaces with ultraviolet chiral response in resonance with biomolecular chirality is critical to maximizing the signal enhancement of weak biomolecular activity.”

Resonant plasmonic-molecular chiral interactions are a promising route to enhanced biosensing, the group writes. However, biomolecular optical activity primarily exists in the far-ultraviolet regime, posing significant challenges for spectral overlap with current metasurfaces. The group developed an optical model of a chiral biomolecular film on a plasmonic metasurface. The model showed that detectable enhancements in the chiroptical signals from the biomolecules were only possible when tight spectral overlap exists between the plasmonic and biomolecular chiral responses.

“Chiral objects are those whose mirror image is not superimposable,” McPeak said. “Your hands are a good example of this. Biomolecules, such as amino acids and proteins, which govern much of the biological processes in our bodies, are chiral as well. Light can also be chiral through polarization. Chiral-chiral interactions can be thought of as handshaking, i.e., shaking two right hands works, whereas shaking right hand to left hand can lead to some awkward moments.

McPeak’s co-authors on the paper are Tiago Ramos Leite, also in the LSU Gordon and Mary Cain Department of Chemical Engineering; Orhan Kizilkaya, with the LSU Center for Advanced Microstructures and Devices; and Lin Zschiedrich, with the Zuse Institute in Berlin, Germany. The work was funded by the National Science Foundation.