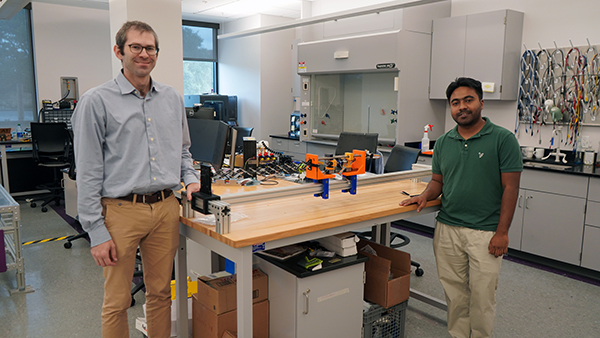 CISIA is a new center under the National Science Foundation’s Industry-University Cooperative Research Center Program that was proposed by LSU and Louisiana Tech. CISIA, whose director is LSU ME Professor Michael Khonsari, helps companies monitor, forecast, and predict structural and mechanical failure in components and structures, both existing and produced via advanced manufacturing techniques. Gilbert’s project is part of that mission.

“There’s a lot of aging infrastructure equipment out there in industry,” Gilbert said. “We need to make sure failure is not imminent. This project is about trying to access difficult-to-reach places so that you can see what’s going on.”

One example is corrosion, which Gilbert says is a trillion-dollar problem worldwide. South Louisiana has many chemical supply plants with insulated pipelines and rusting pipes underneath the insulation. The tentacle-like robot will be able to steer underneath the insulation to inspect the pipe surface. The robot could also be used to inspect parts inside of a gas turbine to make sure everything is working correctly.

“It’s mainly about cost effectiveness,” Gilbert said. “Humans can certainly inspect equipment by disassembling it completely, but that’s time-intensive and costly. In the end, the robot might also deliver remediation inside of the sites, in addition to just inspecting them. You could spray coatings or deliver sensors that are permanently installed.”

A concept sketch shows a tentacle-like robot made of nested tubes that are only millimeters thick, making it easy for them to access small spaces. Gilbert’s lab prototype, which LSU ME graduate student Shahrior Ahmed is helping him build, is 1-2 meters long.

“The concentric tube robots have never been made this long before,” Gilbert said. “They’ve always been much shorter, and the only applications they’ve been studied for are
medical applications.”

The tubes are made of a super-flexible nickel titanium (NiTi) alloy, allowing them to bend around their environment without being damaged. Gilbert says the aim of the project is to get the tubes where he needs them to go and see how the robots interact with their surroundings.

The research at CISIA is at an intermediate stage where Gilbert is still learning the best designs and control approaches for the robot. He hopes to translate the technology into industry, where final product development would take place so that the robots can be purchased by inspection companies that provide services in the field.