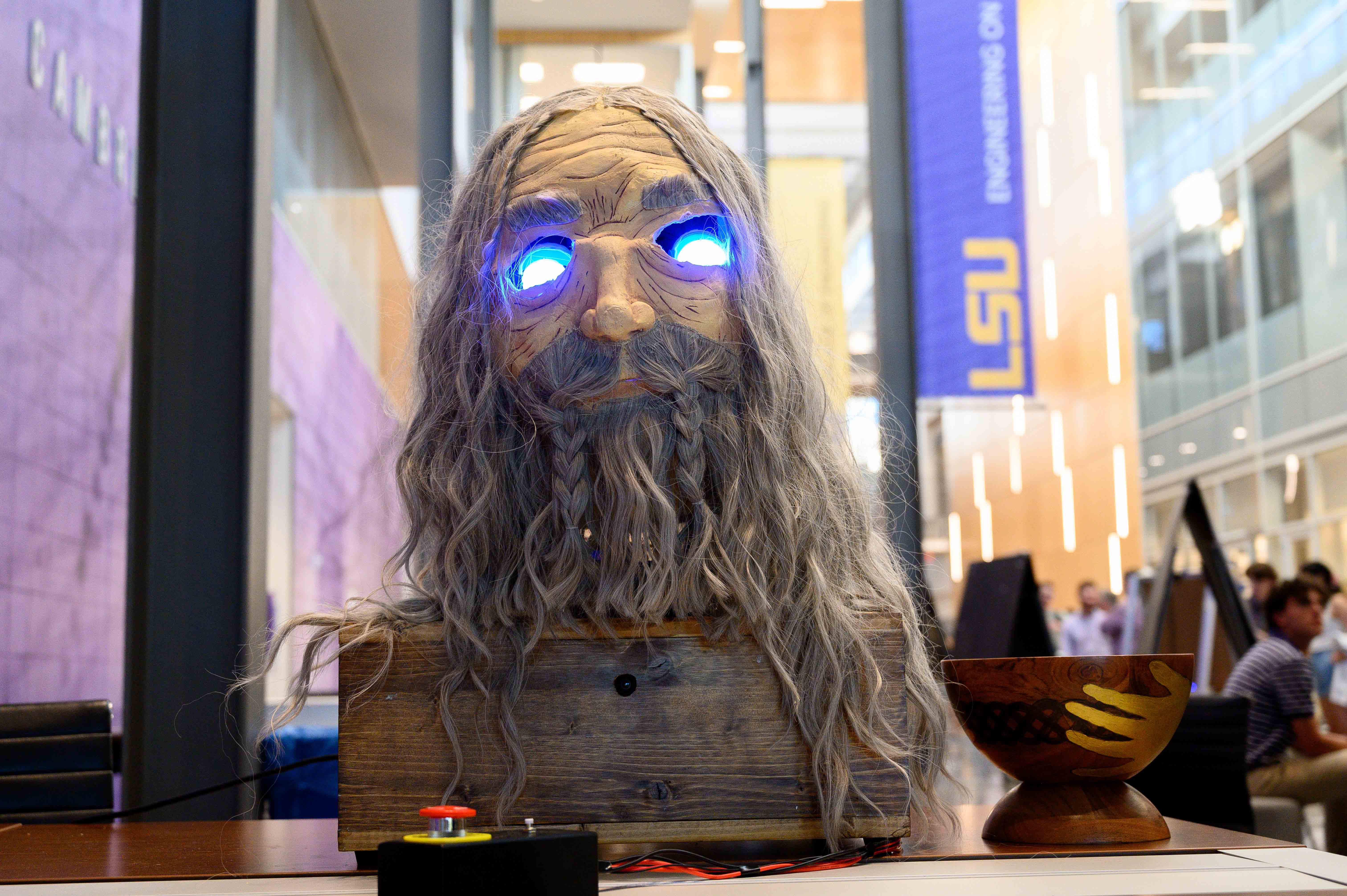 BATON ROUGE, LA – Somewhere in the labyrinth of Patrick F. Taylor Hall, there sits a disembodied head that will provide the answers to life’s greatest mysteries, provided he is presented with the proper offering. His glowing eyes change color as he rewards you or disappoints you in a booming voice at the end of your long quest in search of knowledge.

Okay, so it’s not a labyrinth. It’s a very nice, state-of-the-art lab space on the second floor of the College of Engineering, but the rest of it is all true.

“MIMIR stands for Mechanical Independently Mobile Immersive Robot,” said Landry, a mechanical engineering major from Geismar, La. “He’s based on mythology for the Norse god of wisdom, Mimir, who loses his head in a battle with the Vanir gods. We picked a headless character so that our engineering constraints would match our final product. In mythology, Mimir sits in a well of wisdom and is approached by gods and travelers to share his knowledge. The concept for our interactions is that you are a traveler visiting Mimir’s well and are making a sacrifice to receive his wisdom.

“Our system is a 3D-printed system that sits on a wooden base and is actuated by servo motors. The entire system is covered in a latex skin that is themed to the Mimir character. MIMIR uses object detection as part of his computer vision system and detects an ornate bowl that is held by users. There is a microphone that is hidden in the bottom of the bowl that picks up user audio. The speech recognition system detects keyword phrases that users say and determines what corresponding dialogue output to play. Once the system determines the output, the animatronic begins to move through movements that match his response. He also has LED eyes that change color in conjunction with each output.” 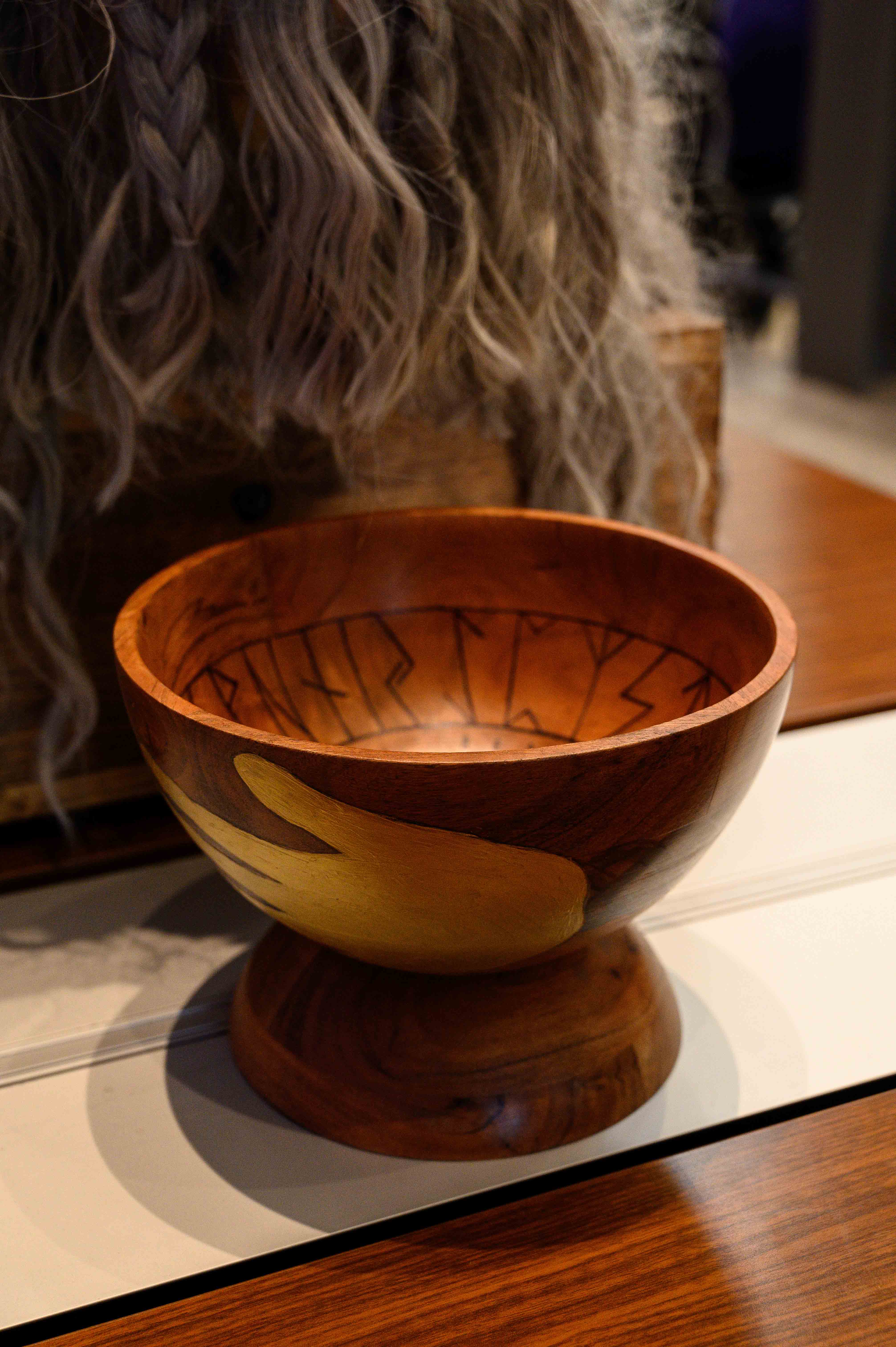 He also wrote the dialogue for MIMIR, which was recorded by Douglas Streater a master’s student in the LSU College of Music and Dramatic Arts.

“The idea started about a year ago, as I was finishing up another animatronic that I built as a hobby,” Devillier said. “I wondered if it would be possible to use technology to interact with animatronics. When I did some research, I couldn’t find any publicly visible animatronics that could be visited at a theme park. I wanted to showcase, both to the themed entertainment industry and to the College of Engineering, a potential future of animatronic technology, as well as promote the industry as a serious [option] for engineers.”

Devillier has also worked to do so through a student organization he founded at LSU with Landry called Tiger TPED (Theme Park Engineering & Design). He serves as president along with Landry, who is vice president; Byrne, the membership chair; and Varnado, a member.

After graduation this week, the group will eventually go their separate ways. Devillier will work at Oceaneering, a company that builds ride systems for theme parks, in Orlando. Landry will work as an associate engineer for ride and show systems at Universal Creative in Orlando. Byrne will move to Atlanta and work for Siemens in factory automation and controls. Varnado will work for Maverick Technologies in Portland, and Dantin is in the process of weighing his options.

As for MIMIR, he will remain with Devillier, who hopes to use him as a learning tool for students.

“My hope would be to bring MIMIR to local high schools to promote STEAM (Science, Technology, Engineering, Art, and Math),” Devillier said. “I think it’s really important to showcase not only the engineering aspects of the project but also the artistic aspects. I think it’s really important for young people to understand that you can be both an engineer and a creative. It’s not an either/or choice.”