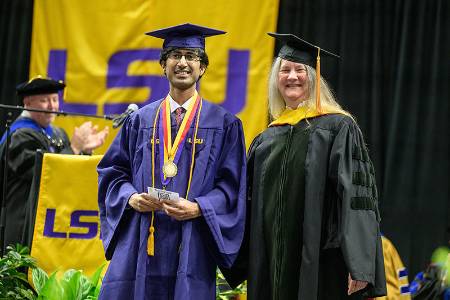 He was also a two-time recipient of the S&B Engineers and Constructors Scholarship and made the President’s Honor Roll seven times.

Kadkol will next begin his career as an associate software engineer at Bentley Systems, where he interned last summer. He also plans to pursue a graduate degree in computer science and business at some point in his future.

About the McLaughlin Medal

The McLaughlin Medal is named for Edward McLaughlin, who served as dean of the College of Engineering for 10 years and chair of chemical engineering for eight years prior to that. In all, he devoted 28 years of service to engineering at LSU.

The McLaughlin Medal is awarded to the undergraduate who graduates with the highest GPA.