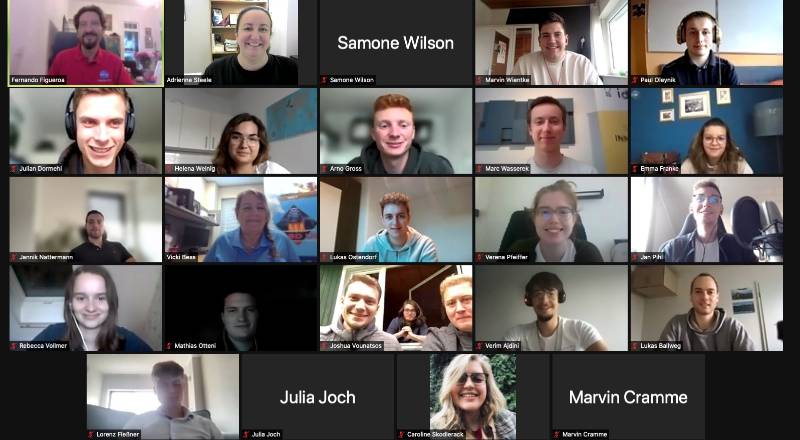 BATON ROUGE, LA – In a normal year, close to two dozen college students from Germany come to Baton Rouge for the German-American Fulbright Program at LSU: Leaders in Entrepreneurship. During these three weeks, each student is paired with a member of LSU College of Engineering’s Society of Peer Mentors as they navigate the university and learn how to become successful entrepreneurs and engineers. This year’s program, however, proved to be a challenging one due to the pandemic and a storm named Ida.

The first challenge was moving the Fulbright Program to the fall instead of spring due to the pandemic.

“We were hoping to do an in-person program this spring, as we normally do, but we decided to push it to the fall thinking that would give us enough time to do an in-person program,” LSU College of Engineering Assistant Director of Student Programs and Outreach Adrienne Steele said. “As [the virus] progressed, we realized we couldn’t. This was the first time and hopefully the only time we need to do this program in a virtual format.”

Virtual orientation took place on Aug. 25, with the 22 German students meeting one another on the video-conferencing platform Zoom. They then went over the student handbook, had one-on-one meetings with professors, and listened to LSU Communication Across the Curriculum Director Rebecca Burdette give an emergenetics assessment, which merges psychometric research and behavior studies that gauge how one prefers to think and behave.

“My favorite part of the program was the emergenetics workshop,” computer science student Jan Pihl said. “I learned a lot about myself and what I can do to communicate and incorporate the ideas of differently-thinking persons. It was very interesting to see how differently the groups approached the tasks.”

As the Fulbright program was set to start the following week, Hurricane Ida devastated parts of southern Louisiana, leaving LSU no choice but to cancel classes for a week. During this time, however, the German Fulbright students connected with one another online.

“Right after orientation and during the hurricane, they all started communicating with each other, and about 10 of them met up at one person’s apartment,” Steele said. “For the first week, they were all sitting there in the same room [in Germany]. We called them the watch party.”

Steele also had the students use the online platform Gather.town, where they created avatars of themselves to walk around a virtual room and “meet” other students. They also connected over LinkedIn, WhatsApp, email, and social media.

“My hope was to learn how an idea becomes a startup that can grow into an established business through great determination, as well as strong focus,” Universität Augsburg industrial engineering student Julian Dormehl said. “Thanks to the great organization, the interesting program participants and inspiring lecturers, I was able to learn a lot about starting a business.”

Normally, Fulbright students are able to visit Louisiana industries and cultural landmarks in person, so Steele and her team made sure they were treated to virtual tours of the Louisiana State Museum & State Capital, Whitney Plantation, and the World War II Museum. They also listened to presentations and interacted with engineers from BASF and NASA’s Stennis Space Center.

Steele said that normally, students are a captive audience when they come to Louisiana, so it was a challenge to keep them interested while they were still in their hometowns. Even so, many of the students applauded LSU’s efforts, learned a great deal, and even had some fun.

“Of course, I would prefer to have an in-person format, but sometimes you can’t change the circumstances,” Universität Heidelberg computer science student Lukas Ballweg said. “All in all, I felt much more involved and active during the program compared to other online programs and think you got the maximum out of the online format.”

“Although it was virtual, I had so much fun and learned quite a lot,” physics student Paul Oleynik of Brandenburgische Technische said. “It was definitely worth taking part in. The virtual format was great.”