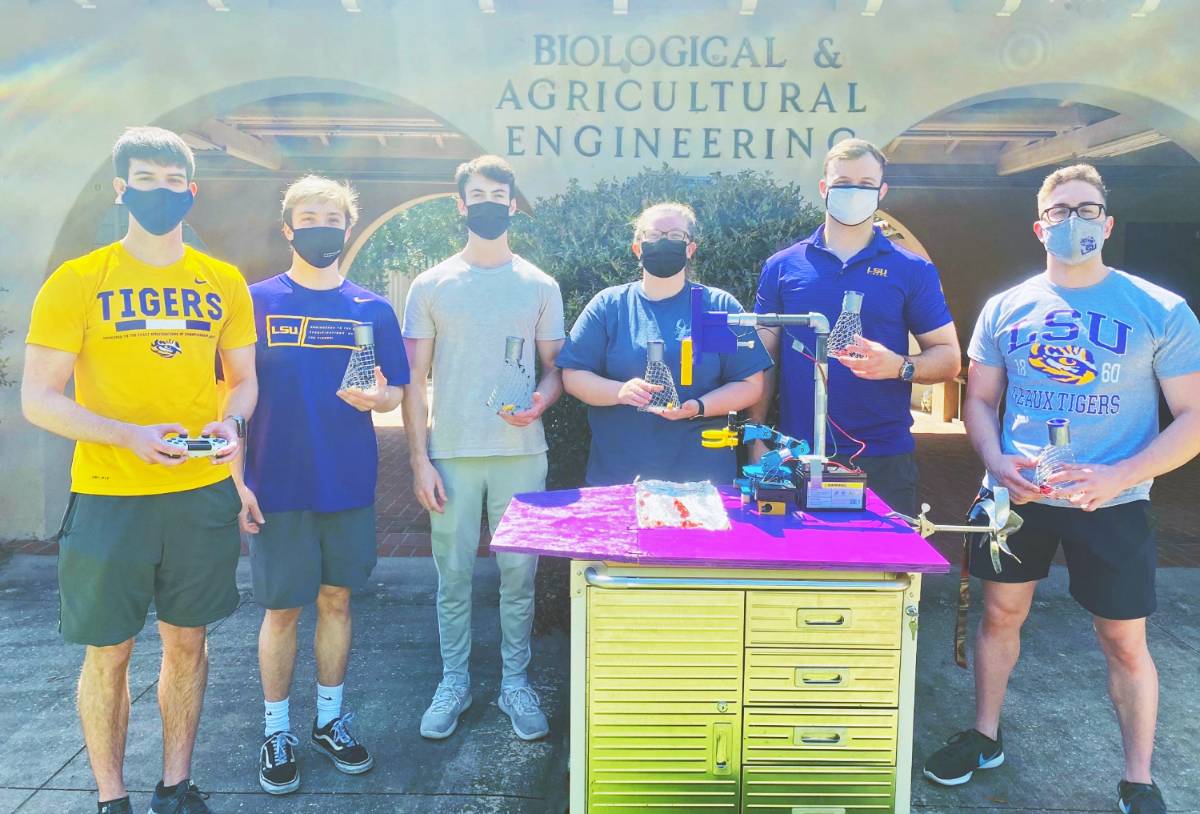 BATON ROUGE, LA – Crawfish harvesting is a way of life that goes back to the late 1800s in South Louisiana. It’s a skill handed down from generation to generation that not only keeps the tradition alive but also puts smiles on the faces of Louisianans who enjoy the fruits of the harvesters’ labor. Realizing the importance of this tradition, yet wanting to innovate it, a team of senior LSU Biological and Agricultural Engineering students recently designed a robotic arm that can help with the harvest.

Each year, more than 100 million pounds of crawfish are harvested in South Louisiana between the months of March and June, with the Atchafalaya Basin seeing more than 800 harvesters each season. It’s a labor-intensive line of work that requires only one person per boat, meaning the crawfish farmer must drive the boat with his or her foot and simultaneously pick up, empty, and rebait the traps.

The LSU BE team says its arm could save workers time and money and possibly prevent back injuries.

“I don’t think there’s anything wrong with the way crawfish is currently harvested, but if there’s a possibility to improve the way we are harvesting, we should try,” LSU BE senior Ben Thomas of Crowley, La., said. “The main reason to build the arm is to improve speed, which would increase productivity. Most agricultural production is trying to be automated to increase yield, and with the growth of the crawfish industry, we thought we’d give it a try.”

“Due to COVID, I could not find a suitable graduate student in 2020, so I decided to put a group of senior design students to work on a miniature prototype,” Theegala said. “I limited the scope to a small robotic arm that is commercially available. Each student focused on a particular component of the project.”

Thomas did the programming and coding and was in charge of controlling the motion of the arm. Waldvogel designed and fabricated the trap rebaiting system by utilizing a 12-volt solenoid to push a bait pellet down a ramp into the trap. Tassin did background research and handled the team’s time management, which included filling out reports, scheduling meetings, and keeping up with deadlines. Vercher helped design the automated bait reloading device and shared his knowledge of living and working on a crawfish farm. Mitchell designed and printed a 3D custom gripper, along with smaller pieces needed for testing; and Glaser was in charge of the budget, ordering parts, and helping set up the testing tank. 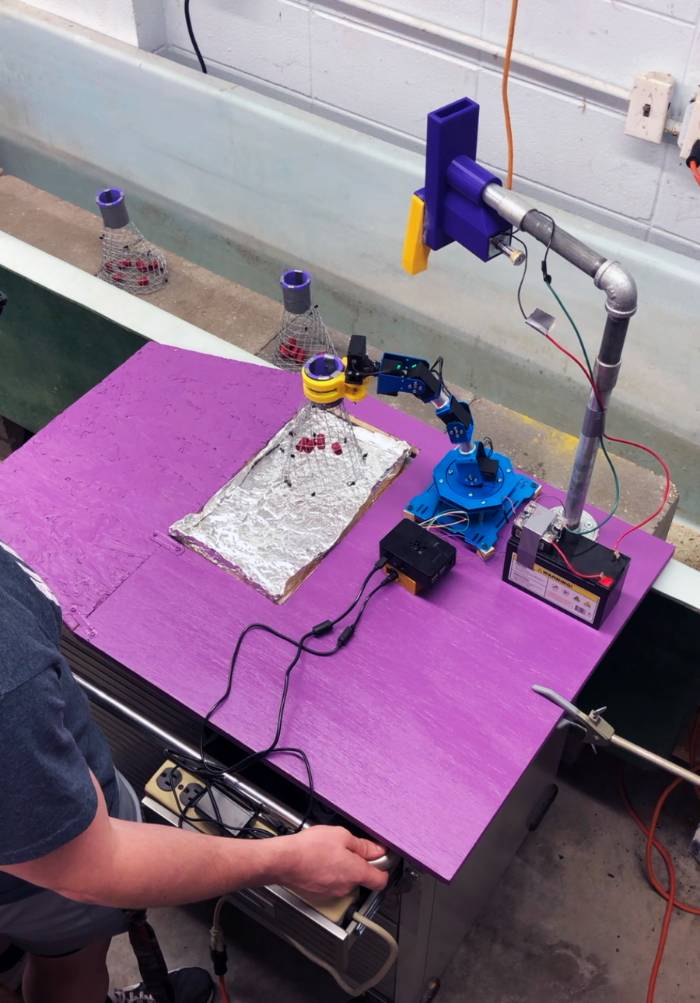 The harvesting arm, which was built to one-third the scale of a commercial crawfish trap, is controlled by a Playstation 4 controller. It directs the arm to grab the trap, dump, rebait, and place the trap back down. The only part that isn’t autonomous is aligning the arm with the trap.

“The hope is to have it be entirely autonomous, being able to align itself on a moving boat,” Thomas said.

The team’s test results show that the design is 87.78 percent reliable in picking up traps at an average of 18.3 seconds, roughly as fast as a person.

“If the arm could be fully autonomous, the grabbing time could be reduced by a significant amount, since in an ideal situation, the boat would never stop and the arm’s reach would be able to grab the trap towards the front of the boat,” Thomas said.

Whether or not the crawfish industry embraces the idea of using a robotic arm for harvesting, the LSU team enjoyed its experience working together and coming up with an idea that could be beneficial to their home state.

“This project was very interesting to me because of the impact it could have on a major industry,” Tassin said. “It has always been my goal to create something that could have a major impact on the world in some way.”

“The crawfish industry in Louisiana alone is massive, and to be involved in something that is ingrained within our culture is pretty neat,” Mitchell said. “I think it will be exciting to see the finished product in the future and be able to say I was part of the team that created a prototype for this.”

“This project was especially exciting to me because I know the impact it could potentially have on my own crawfish farm in the future,” Vercher said. “We all had impeccable teamwork skills that allowed us to work together efficiently. I couldn’t have asked for a better team.”