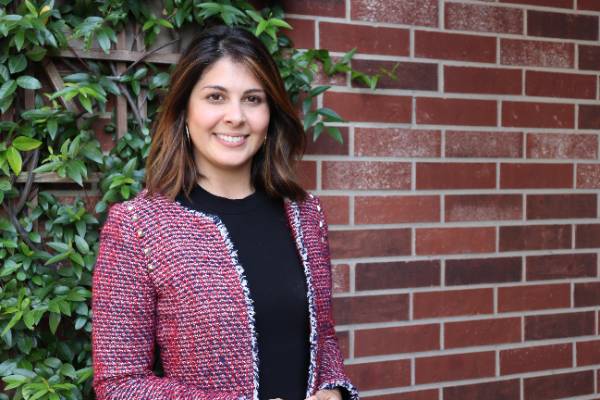 BATON ROUGE, LA – Houston now has purple and gold at its core. In June, Houston Mayor Sylvester Turner named LSU Environmental Engineering alumna Laura Patiño interim chief resilience officer. It’s a position that will allow Patiño to use the knowledge and skills she has acquired over the years in order to make the nation’s fourth most populous and most ethnically-diverse city a better place to live.

“Houston is such a large and diverse city that there’s something new to learn every day,” Patiño said. “Its people truly are Houston’s most valuable resource. Working under Mayor Turner’s leadership, I’ve been able to work on a team committed to bring transformational change to help Houstonians prepare, adapt, and thrive for the future while leveraging the strengths of each community.”

As interim CRO, Patiño oversees 62 different actions and 18 goals that fall under the Resilient Houston plan, which brings together stakeholders and community members to make Houston more resilient. The strategy was put together over the course of a year to look at how the city adapts to climate hazards such as floods, extreme heat, and hurricanes, as well as aging infrastructure, homelessness, and economic inequality, and how it all impacts the built environment, health, transportation, education, mobility, housing, and the economy.

“Resilient Houston is structured in five different scales of impact—what individuals can do, what neighborhoods can do, what the city can do, what can be done as a region, and at the bayou level,” Patiño said. “Bayous serve as connectors through many of our communities and are a source of recreation and greenspace but also pose the highest risk.”

Patiño is accustomed to flooding having lived in Baton Rouge, New Orleans, and now Houston, so it should come as no surprise that she hails from a major city that is also heavily impacted by climate change.

Born in Cali, Colombia, Patiño moved around with her family as a child, first living in Florida, then Canada and the United Kingdom, then back to Florida. When it came time for her to enter high school, she convinced her mom to let her go back to Colombia where she would live with her aunt and attend an IB (international baccalaureate) program school.

“I wanted to go back to Colombia so I could ensure I was fully bilingual and make sure I didn’t lose part of what defines me,” Patiño said.

Per an agreement Patiño had with her mother, she would return to the U.S. to attend college once she finished high school. Not sure where to start looking for colleges, Patiño moved in with her mom in Ocean Springs, Miss., and took six months to research various schools around the country.

“I will say as an international student, it’s hard,” Patiño said. “You don’t know the process. Even though schools are visited by university recruiters, understanding how to get into a U.S. university is a complicated process.”

In 2009, Patiño started visiting some of the universities, but one caught her eye.

Not sure what to major in (business and pre-med crossed her mind), Patiño decided on engineering because she wanted to “bring solutions to a rapidly changing world.” As an LSU engineering student, she became involved with groups like the Society of Hispanic Professional Engineers and the Louisiana Water Environment Association.

“The LSU engineering staff, students, facilities, and resources are remarkable,” she said. “I felt like LSU was opening its doors to me. I got a full scholarship and it was close to home. It just made sense. The energy there is captivating.”

During her time at LSU, Patiño spent two summers as an intern working for Shell Oil in New Orleans. During her first internship, she focused on developing an air quality inventory for Shell’s oil platforms in the Gulf of Mexico. During her second summer internship, she worked with a group that focused on remediating and restoring land that was impacted by oil and gas operations.

“My second internship took me all over small towns in Louisiana that I had never heard of, and the people I got to work with were amazing,” she said. “The question I always got was why, as an environmental engineer, are you working for an oil and gas company? My answer is always the same. I think environmental engineers get to see and bring a different perspective. We’re there to restore. Bringing resilience and sustainability principles into your role is more and more important than it has ever been. You’re an asset to those companies.”

After graduating from LSU in 2013, Patiño began a full-time job with Shell, an offer that came about after her second internship there. She began working in remediation, then went with the offshore environmental group to focus on water discharges by oil and gas platforms into the Gulf. She also had the opportunity to participate in oil spill response activities and be part of the conversation about coastal land loss and how it impacted communities and the industry’s assets in the Gulf, specifically Louisiana.

“That started getting me involved with a lot of nonprofits and took me back into the grass-roots environmental space,” Patiño said. “That’s where I met someone who had attended McGill University’s Integrated Water Resources Management program, a program that I had been looking at for years.”

Patiño left her job at Shell in 2016 and moved to Montréal, Canada, to work on her master’s at McGill, a research-intensive university, where she studied in the Department of Bioresource Engineering. The program was one year of courses and a six-month internship.

When it came time to do her practicum, Patiño thought about the city of Houston and how they had recently weathered massive flooding from Hurricane Harvey.

“It brought back memories of Hurricane Katrina,” she said. “This was an opportunity for me to come down to Houston and learn about disaster recovery, water resource and climate adaptation in real-time.”

While visiting Houston the summer between courses at McGill, Patiño hit the ground running and met with people and groups involved with flood control and water resources.

“It was a lot of cold calls, offering to buy coffee and lunch, and just contacting people through LinkedIn to introduce myself,” she said.

That networking led Patiño to the mayor’s office, where she met Houston’s Chief Recovery Officer Stephen Costello, also known as Houston’s “Flood Czar,” a previous council member and renowned civil engineer who has worked in the Houston area for more than 40 years. Costello and Sallie Alcorn, Costello’s chief of staff, subsequently asked Patiño to join his office as an intern.

Soon after joining the Recovery office, Patiño was promoted to recovery chief of staff. A year later, she took on the role of resilience chief of staff as well. Patiño worked with Chief Resilience Officer Marissa Aho to primarily focus on water infrastructure and how to bring more innovative approaches to flood control in the city. As recovery chief of staff, Patiño secured funding for large-scale and transformative hazard mitigation projects. She also worked to launch a green infrastructure program, including incentives for green development for the private sector.

“Costello, Aho, and Alcorn, who is now a council member for the City of Houston, have been instrumental in my development as an engineer focusing on public service,” Patiño said. “It’s not easy to make the transition from the private sector into government, but it has been a pleasure working with knowledgeable individuals dedicated to improving people’s lives.”

When the chief of resilience left, Patiño was asked to fill the role as interim CRO.

“It’s not easy to fill in the shoes of a two-time chief resilience officer, but I am working to keep the efforts moving forward and am hoping to make it permanent,” she said. “This work is inspiring. Mayor Turner has set the vision for an equitable, inclusive and thriving city that builds forward, that is a leader at an international scale, and that works for its people. I am happy to be part of his team.”

Patiño must still lend support to the Recovery office, but her world is not just about flooding; it’s now the entire umbrella of resilience for the city of Houston.

“When we combine forces with Recovery, we’re very powerful and work with every department to move efforts forward,” she said. “We are not just building back, we’ll build back better and in a more resilient way. We need to be prepared and be able to adapt.”