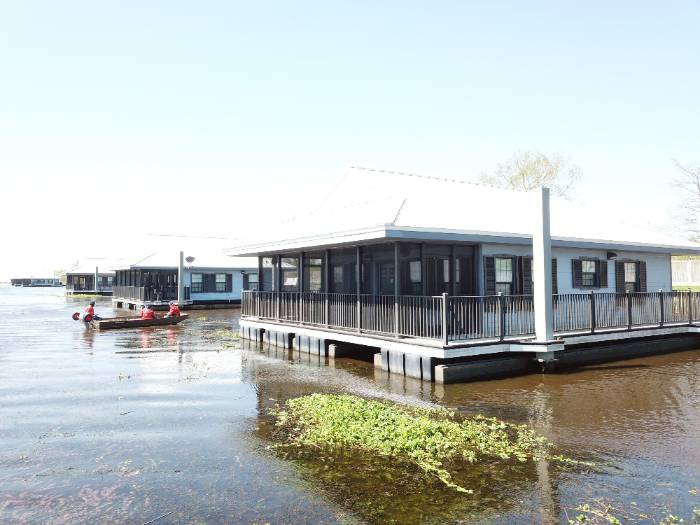 BATON ROUGE, LA – As sure as the sun will set, at least one hurricane will blow through the Gulf Coast region each year. The National Oceanic and Atmospheric Administration (NOAA) predicts that the 2021 Atlantic hurricane season will be an above-normal season, meaning the potential for floods and wind damage is all but inevitable. Though storms aren’t controllable, the human response to them is.

Over the past year, LSU Civil and Environmental Engineering Assistant Professor Navid Jafari has worked alongside the U.S. Coast Guard in New Orleans on how to leverage unmanned aerial vehicles (UAVs), or drones, to facilitate its search and rescue operations immediately after a hurricane.

“Within the first 24 hours after a hurricane, the U.S. Coast Guard is the first search and rescue group getting calls from people in distress,” Jafari said. “The difficulty is that they are trying to navigate through an urban environment without the benefit of a bird’s eye view of where there are blockages, or the area is completely devastated and unrecognizable, and what the most efficient route will be to the target home. Using a drone could save time and lives.”

In April, Jafari was invited to U.S. Coast Guard training, where he worked with Lt. Jacob Bailey to set up exercises with and without drones. The takeaway was that drones helped lead boat operators to specific locations for rescue, but further research is needed to make improvements.

“There are still some missing pieces, but this is where the next step of our research comes in,” Jafari said. “A drone is small and hard to see the further away it gets, so how can we make it more visible to boat operators so they can follow it? Also, radio communication gets lost the further out the boats go, so we need to find a way for the drone to directly communicate with the boat so there’s no miscommunication.”

Jafari said it could be as simple as putting colors on the drone to signal down to the boat operator. For instance, red could mean stop, yellow could mean proceed with caution, and green could mean go ahead. Jafari would also like to develop a platform to integrate drone and computer technology with the current built environment, which could include research on how to collect data from the drone’s camera sensors, such as water levels and where people are located.

“If you have a thermal infrared camera, you can locate bodies,” he said. “You could feed that information to the boat operator so they know exactly where to go and know what the hazards are in that area. At first light, the Coast Guard will take calls and get out there to rescue people. We would be out there with our drone and infrastructure knowledge helping them. Our hope is to have the federal government invest more money in technologies to collect better data and process it faster, which will save lives.”

Jafari, who is also a key player in NSF’s NEER (Nearshore Extreme Events Reconnaissance) program, led by Britt Raubenheimer at Woods Hole Oceanographic Institute, will conduct hurricane reconnaissance if and when a hurricane hits Louisiana or East Texas.

Within LSU and the state of Louisiana, Jafari is one of the few researchers who does pre-deployment of sensors to collect water data and conducts drone surveys of flood protection infrastructure before a storm hits. He teamed with Qin Chen at Northeastern University during the 2020 hurricane season to specifically deploy sensors before Hurricanes Laura and Delta to understand how wetlands can serve as natural flood protection for coastal communities. His hope is to continue this valuable reconnaissance research so that in case there is another Hurricane Harvey or Laura predicted to hit the Gulf Coast, LSU will be ready to act fast.