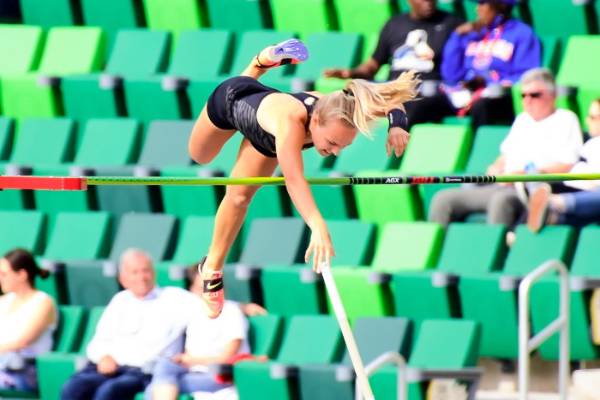 BATON ROUGE, LA – This June has proven to be an exciting month for the LSU Track & Field team, with the men’s team taking first place in the 2021 NCAA Championships and many current and former LSU track team members competing in the U.S. Olympic Trials. One athlete who has stolen the spotlight, however, is LSU Mechanical Engineering senior and LSU pole vaulter Lisa Gunnarsson.

On June 10, Gunnarsson braved the elements at the NCAA Championships in Eugene, Ore., to make history by becoming the first woman since 2010 to sweep the indoor and outdoor NCAA pole vaulting titles. She is also the first-ever female athlete at LSU to win the NCAA outdoor title event.

“The weather conditions weren’t great that day,” she said. “It was windy and cold, so we jumped a bit lower than we had expected, but it was just about winning.”

And win she does. Gunnarsson also claimed the NCAA indoor pole vault title in mid-March, not to mention her various championship wins all over the world, including placement in the 2017 European Indoor Championships in Belgrade. For a 21-year-old who is gifted with athleticism, smarts, and speaks four languages (English, Swedish, French and Spanish), Gunnarsson is going to take the pole vaulting—and engineering—world by storm.

Born in Stockholm, Sweden, the 5-foot-7-inch Gunnarsson began pole vaulting at the age of 13 after having practiced gymnastics for seven years. Her mother was a high jumper and started bringing Gunnarsson to the track, where she practiced hurdles and sprints, though pole vaulting caught her eye.

“I learned there was a former Russian gymnast who was a pole vaulter, and she was really good,” Gunnarsson said. “I thought, let me try it as well. That’s kind of what got me into it.”

During her first pole vaulting competition in the spring of 2013, Gunnarsson cleared almost 8 feet (2.4 m). Just two months later, she improved her personal best to more than 11 feet (3.42 m). While Gunnarsson attended middle school at Notre-Dame de Sainte-Croix high school in Paris, she competed for the French athletics club Stade Francais. Though she won the French championship in pole vaulting, she could not technically accept the title since she was not a French citizen. She also played for the Swedish club Hasselby SK as a Swedish citizen.

In 2018, Gunnarsson brought her pole vaulting skills to Virginia Tech as a freshman before transferring and joining the track and field team at LSU in 2019.

“I knew Mondo Duplantis [former LSU pole vaulter and world record holder from Sweden who went pro after his freshman year] from Lafayette since we did many competitions together, and I know his coach, who is also his dad,” Gunnarsson said. “I told them I wanted to train with them, so I went to LSU. LSU has a great team, and the school and campus are great, too.” 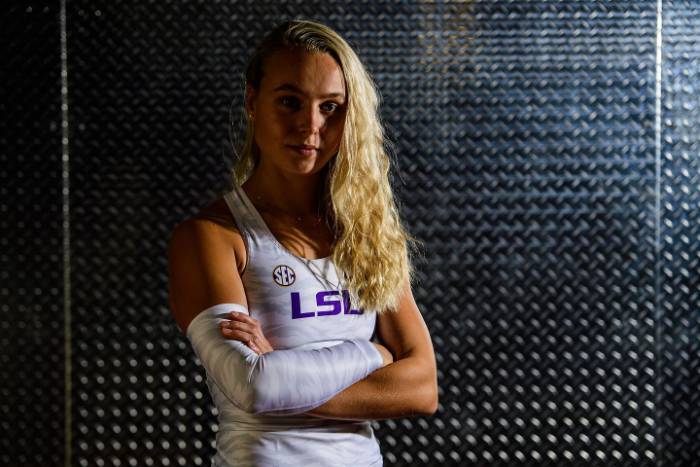 When it came time to choose a major, there was no question that Gunnarsson wanted to study engineering, as both of her parents were engineers.

“It just felt natural,” she said. “I really didn’t know what I wanted to do, but I always knew I wanted to be in engineering. I thought mechanical would be a good choice since it was broader, and I like the theoretical part of it. It’s been an awesome journey so far.”

With only one more year left at LSU, Gunnarsson is trying to figure out where her pole vaulting will lead.

“I do want to continue pole vaulting, but I still want to have a professional career when I’m older,” she said. “I’ve considered going pro after college, but I also want to continue studying towards a master’s or PhD. I want to make both work.”

While Gunnarsson could stay at LSU to continue her engineering studies, she is likely to move back to Europe to be closer to her family. Her older brother has a business degree from Argentina (where Gunnarsson’s parents currently reside) and is working on his master’s in Paris. Her younger brother is studying computer science in the Netherlands. This summer, Gunnarsson is travelling through France with her mom to train and compete but later plans to see her whole family at their Swedish beach house to relax and most likely take in the blessings this year has brought her.

“Setting these records at LSU feels special because it will stay in the history book and can never be taken away from me,” she said. “I feel so proud.”

Pole vaulting hasn’t been at the forefront of LSU Athletics in recent history, but Gunnarsson is changing that and hopes to inspire other young athletes to give the sport a chance.

“I hope I’m able to inspire other athletes,” she said. “Pole vaulting is such a fun event and teaches you control of your body. There’s no mold. You have to find your own technique. It takes real practice and courage.”