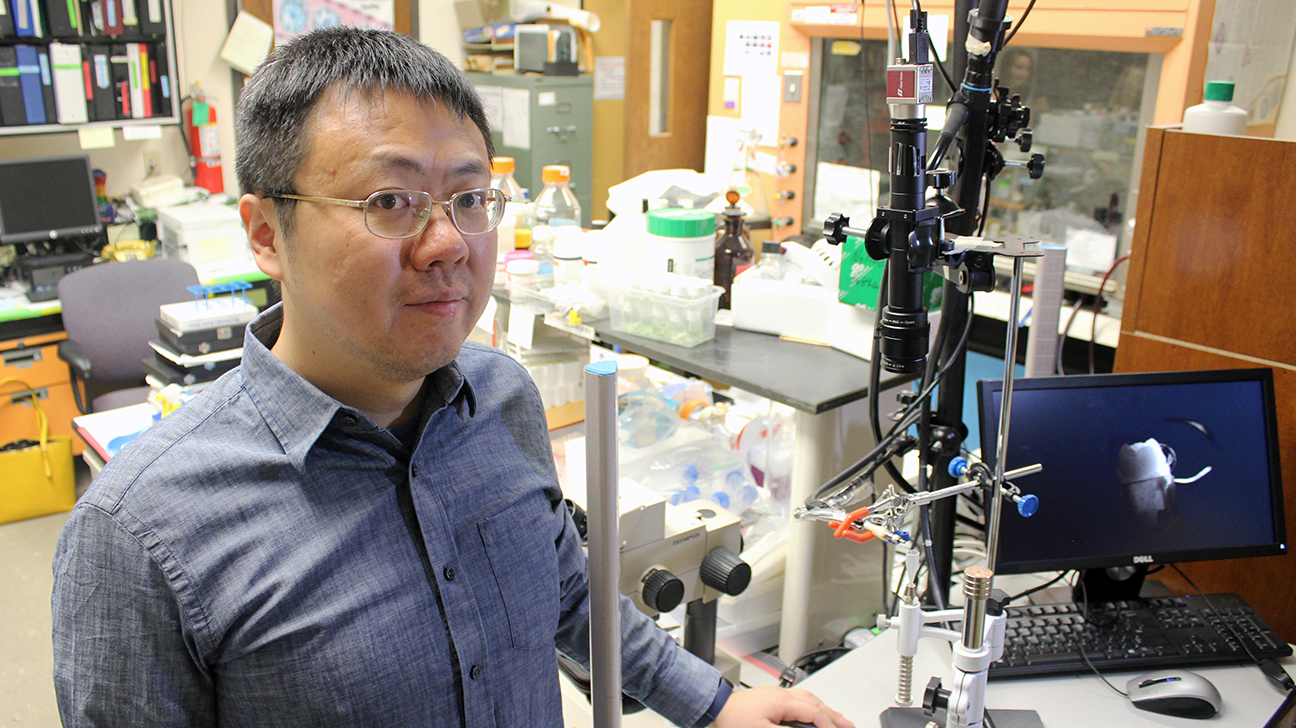 Xu is now able to develop his work further, thanks to his recent National Science Foundation CAREER Award for his project, “Image Critical Dental Diseases That Current Dental X-ray/CT Fails to Detect, Without Ionizing Radiation.” The award is in the amount of $500,000.

He is the fifth faculty member in the College of Engineering to receive an NSF CAREER Award in the last year.

In his initial project, Xu was able to research tooth abnormalities that require a great deal of X-ray imaging, exposing patients to ionizing radiation. X-ray imaging techniques, such as 2D X-rays and 3D computed tomography (CT), are widely used in dental clinics and release this harmful radiation, which involves atoms in living cells becoming ionized, leading to one of three things—the cell dies, the cell repairs itself, or the cell mutates incorrectly and becomes cancerous.

To combat this, Xu began experimenting with near-infrared imaging, or NIR, specifically fluorescence imaging. This type of imaging used indocyanine green, or ICG, a dye that has been approved by the U.S. Food and Drug Administration and the European Medicines Agency. The work proved successful and since then, Xu said, there have been even more innovations made.

“First, now our method can not only eliminate the ionizing radiation from the prevalent dental X-ray/CT, but also outperforms the dental X-ray/CT in some aspects,” Xu said. “For instance, our new scheme can detect some critical diseases that current dental X-ray/CT fails to detect. Some of these diseases are very common. For instance, 34-74 percent of people have tooth cracks. Due to highly variable symptoms, cracks are notoriously difficult to diagnose, even for experienced dentists. Our new dental imaging scheme can easily detect the cracks, including the thinnest type (e.g., a crack of 3 um wide).

“Second, we developed a user-friendly, particularly child-friendly, fluorescent dye delivery by mouthwash,” Xu added. “Currently, the FDA-approved dye we used, the ICG, is only delivered to humans by intravenous injection or bolus injection around target tissues. An innovation of our scheme is to introduce ICG, or other biocompatible dyes, to the dental structures by user-friendly ‘mouthwash’ method. The patient holds the dye in the mouth for a while, then spits to get ready for imaging. Our pilot study showed that dental structures can be clearly imaged within one minute after mouthwash, which is compatible to the current clinical practice of dentistry.”

Xu is optimistic about his technology becoming the standard imaging technique for dentists in the future and doesn’t see any major tech obstacles on the path to commercialization. So far, he has successfully demonstrated the feasibility of his imaging method on extracted human teeth. The next step will be clinical trials.