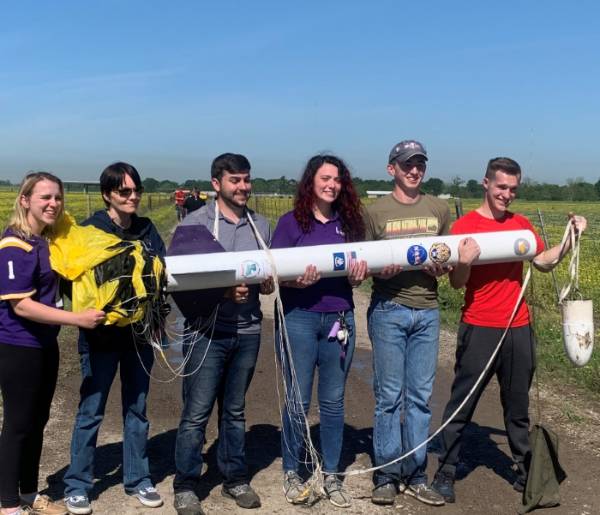 On a beautiful April day without a cloud in the sky, a team of LSU Engineering students made history when they completed LSU’s first-ever successful hybrid rocket launch. The senior capstone design team is comprised of mechanical and electrical engineering seniors who had been working on their aptly-named Valkyrie project since August and are now ready to graduate, having this accomplishment under their belt.

Team leader and ME student Madeline Kirby of Plaquemine, La., was in charge of the propulsion system, ignition systems’ development, rocket-glider simulations, and overseeing other parts of the project. ME senior Thomas John of The Woodlands, Texas, built the launch stand and transfer system and collaborated on the ground system’s development. EE senior Christina Adams of Baton Rouge built a new development to the project that focused on the rocket’s vibrations as it prepared to launch. Her vibration system will be an ongoing development for next year’s team with the initial design laid out.

Electrical engineering seniors on the team included Claire Pearson of Mandeville, La., who worked on the navigation system by developing a flight path to transition from rocket to glider mode, which had features enabled for stabilization. She also worked on the telemetry system, so that data was acquired throughout flight, and the parachute deployment system, which allowed a safe recovery of the vehicle. ME senior Jordan Paline of Baton Rouge worked on the aerodynamics and developed the method for manufacturing the fuel grains so there were no cracks in the wax as it hardened. He also assisted with launch stand developments and collaboratively worked on the parachute deployment system with Pearson. EE senior Jason Villar of Saint Amant, La., built the ground system electronics and ignition charge and also developed a telemetry system for the ground station to record data while the rocket was on the launch stand. 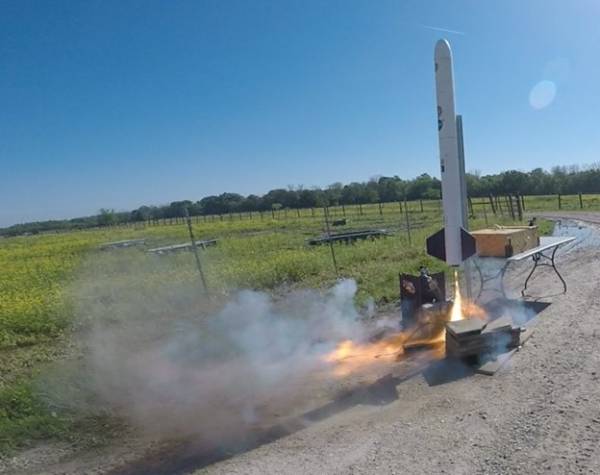 Valkyrie is a core-burning LN20 hybrid rocket glider with a 7-ft.-tall rocket with an adjustable rail system for the wings, making it capable of a glider configuration.

“This is a direction NASA and aerospace companies have been going towards but haven’t had a lot of success in,” Pearson said. “I had actually contacted George Story, the head of NASA’s Hybrid Rocket Division, to have him look at our rocket and assist us. He didn’t give us a lot of promise because his NASA team was unsuccessful with their own hybrid design.”

Hybrid rockets have been an ongoing project for the last 20 years. What makes a hybrid rocket is the utilization of liquid and solid fuels. Pearson said the team used paraffin wax as its fuel grain tubing for liquid fuel and black powder as the solid fuelant for the ignition system. What also makes a rocket hybrid is that 75 percent of the rocket gliders are reusable.

“A unique development in our project, thought of by Jordan, was the use of a crawfish boiling pot where he molded the paraffin wax,” Pearson said. “Typically, when you’re cooling the wax, the internal and external temperatures are different, which causes the wax to crack. While the wax was cooling, however, we kept the water flowing and applied a centripetal force, where we also vacuum-sealed it, which enabled us to have none of the cracks like the other teams, so ours didn’t explode.”

On the actual day of the launch, the team was limited to launching just 400 ft., per Federal Aviation Administration guidelines. The rocket itself was restricted to 1,300 ft., but that didn’t include the wings for the glider.

“We couldn’t make that rocket to glider transition beyond the restricted range of 400 ft.,” Pearson

said. “The rocket acts as a UAV, so it would be a huge vehicle that would need a pilot or someone who is highly certified if we went above that range.”

Nonetheless, the launch was a success with no crash at the end. To watch the actual launch, visit https://www.youtube.com/watch?v=tf3twe3q8EY.

The project was funded by LSU, LA Space and Steve Villar.