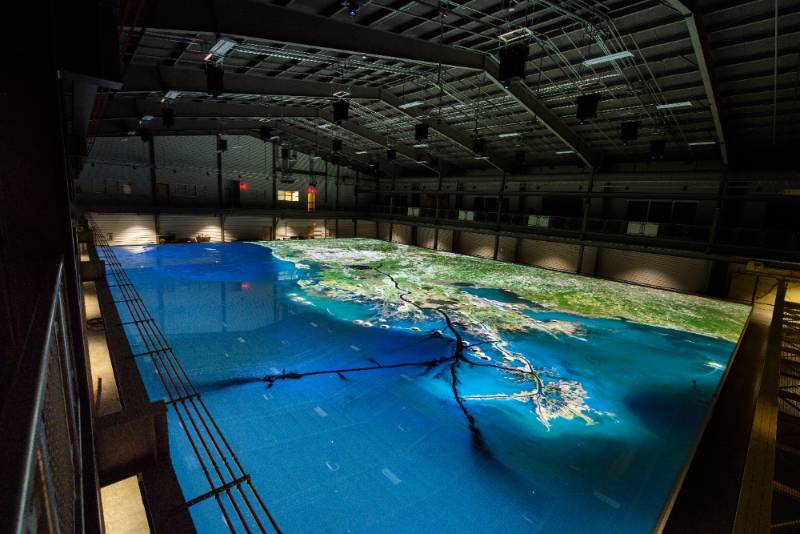 BATON ROUGE, LA – Sometimes years’ worth of studies and research can turn into a collaboration that will not only help the nation’s military but also coastal land-margin regions around the globe. Such is the case with LSU Civil and Environmental Engineering Professors Scott Hagen and Clint Willson and LSU College of the Coast & Environment Professor Robert Twilley, who recently received a $9.3 million grant from the U.S. Army Corps of Engineers to work alongside the U.S. Army Engineer Research and Development Center’s Environmental Laboratory (ERDC-EL) and the University of Delaware to explore how sea-level rise and other impacts of climate change will affect coastal military bases and ecosystems.

This is the largest grant ever awarded to a single coastal engineering and science team at LSU.

Hagen, who holds the LSU Louisiana Sea Grant Laborde Chair and is the director of the LSU Center for Coastal Resiliency, has spent the last decade developing a research program around the coastal dynamics of sea-level rise and has secured millions of dollars in grant money for his transdisciplinary efforts over the years—more than $4 million from the National Oceanic and Atmospheric Administration (NOAA), as well as millions from other federal agencies. These efforts focus on the impact that sea-level rise has over the entire coastal land-margin and—through field data collection, laboratory analysis and the development and application of high-performance computational models—can simulate and help diagnose past, present and future conditions for far-ranging scenarios.

Willson, who holds the Mike N. Dooley Professorship at LSU, has worked on overland models over the years and currently runs the LSU Center for River Studies, which conducts research on the world’s major rivers (with a specific focus on the Mississippi River), and houses one of the world’s largest movable bed physical models. Through this project and others, his group also applies hydrology and hydraulics models to study how overland and riverine flows are impacted by natural and human systems, including land use and land cover, river geometry, and sea-level rise.

Twilley, who is the executive director of the LSU Coastal Sustainability Studio and the project’s principal investigator, has researched the Wax Lake Delta ecosystem over the past 20 years and is an internationally-recognized expert for his systems ecology research in coastal wetlands, including mangrove systems in the Gulf of Mexico and around the world.

Since January of 2015, these three professors have worked together with numerous other LSU faculty and staff on a $1.6 million NSF Coastal SEES grant and, more recently, have contributed to the $3 million “Inland from the Coast” project led by the LSU Coastal Sustainability Studio and Willson as co-PI.

“It’s our individual and collective efforts that gave us a profile where the University of Delaware and the U.S. Army ERDC-EL looked at that and said we’re the missing piece,” Twilley said. “We have scholarly work that culminated in an effort where we’re translating systems ecology, large-scale physical modeling, and the coastal dynamics of sea-level-rise paradigm to develop collaborative ecosystem design approaches to restoring coastal land-margin regions here in Louisiana and around the U.S. coasts.”

Hagen said that how core flooding processes change is critical.

“If you don’t understand how water flows or its changing salinity levels, you cannot construct a robust ecological model,” Hagen said. “Whenever we as civil engineers build an infrastructure, whether it’s a bridge, seawall, roadway, structure, or ideally, a nature-based infrastructure, one of the first things we do is assess the soil properties. If we don’t understand the water cycle and ecological systems that influence how these soil properties can change, we can’t rigorously design for the future.

“Dr. Twilley can take our results and use them from a systems ecology perspective in order to express how they’re going to respond over time,” Hagen continued. “Then the U.S. Army ERDC-EL and University of Delaware can use that information to say if soil properties are going to change based on those conditions. When the soil properties change, there is potential for having to rethink how the Army and society deals with the coastal land-margin. It’s not only about the military responding to sea level rise, but also societies. Huge population migrations will happen, which we’ve already seen with some Louisiana fishing communities.”

Willson said that the Department of Defense has many installations along the coast. This project takes those facilities and training areas into consideration, which could affect future military operations.

“Ultimately, all of this applies to communities,” Willson said. “It doesn’t matter whether it’s an Army base or a facility along the coast. They still have to think about how their resource is going to be affected by changes in riverine flooding or whether it’s increased precipitation or flow from storm surge.”

Willson said a lot more is known about the climate now than before, and with that understanding is a broader recognition of the uncertainties needed to design within.

“Do we know what it’s really going to be like in 20 years?” Willson said. “No, but we have better tools, data and modeling now. However, we still have the problem of how do we move forward thinking about planning and designing systems, which could be roads, installations, or training areas. How do we design those so we can adapt as we move forward, or can we better manage what’s going on to maintain the effectiveness of whatever the system was? This is exactly why we developed a new master’s program in coastal and ecological engineering in 2012.”

The M.S. in Coastal and Ecological Engineering, a joint program through the LSU Departments of Civil and Environmental Engineering and Oceanography and Coastal Sciences, focuses on integrating collaborative ecosystem design with traditional coastal and water resources engineering concepts and methodologies. The objective of the program is to produce masters-level students who have the background and skillsets to design systems that will perform to not only current or future design standards but are able to adapt and continue to function under dynamic and uncertain future conditions.

What happens with the eroding coastline, climate and less predictable storm systems each year remains to be seen. However, the LSU team will spend at least the next four years researching how to bring all this together so that coastal communities and military bases can better plan for an uncertain future.

“It’s not a simple problem to solve,” Willson said.

“The work we’re going to be doing can’t be done simply with a multi-disciplinary team,” Hagen said. “One needs to understand and have the component of the other in order to get from point A to point B. It requires collaborative ecosystem design, which with curriculum enhancements like the MS program and the direct involvement of our stakeholders can be a truly convergent research process.”