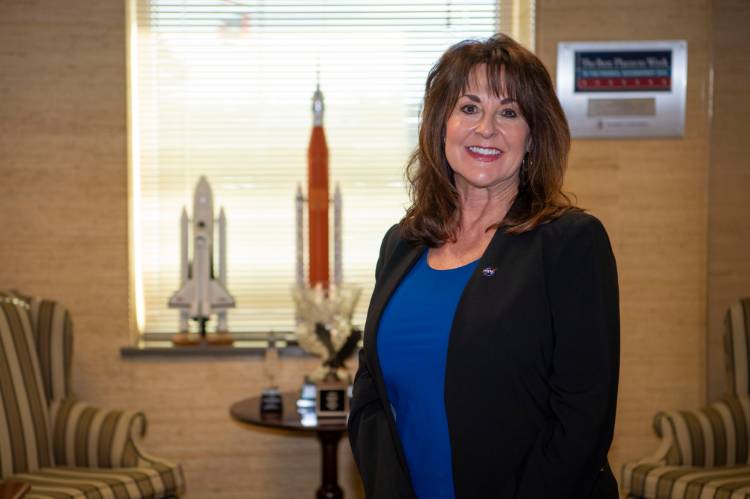 BATON ROUGE, LA – LSU Electrical Engineering Alumna Mary Byrd is leading the way at the John C. Stennis Space Center as its new associate director—the first woman to hold the position—working her way up the career ladder through hard work and dedication and aiming to mentor other young female engineers to show them anything is possible.

“I didn’t know what I wanted to do when I was younger,” Byrd said. “It wasn’t until high school that I had a better idea, once I realized I loved math, physics and chemistry. I knew I needed to find a career where I could apply my strengths.”

“My father told my brothers and me that we could go to any college we wanted, but if we went to LSU, he would pay,” Byrd said. “My family loves LSU.”

After graduating from John Ehret High School in Marrero in the late 1970s, Byrd moved to Baton Rouge and enrolled in engineering at LSU.

“I didn’t have a big STEM education like you see today,” she said, “but I knew I wanted to get into engineering, so I majored in chemical.”

After struggling with the infamous organic chemistry course, Byrd decided to take her brother’s advice and switch majors to electrical engineering, convinced that it would be easier to find a job with that degree. As one of a few female engineering students at LSU, Byrd said she was lucky that she had her best friend with her throughout college, since she was majoring in engineering as well.

“My best friend from high school and I roomed together at LSU, so we had each other to lean on,” Byrd said. “I also had my brother there studying engineering, and I was an extrovert, so I think that helped me adapt.”

Byrd said what also helped her feel connected in the college was joining as many clubs as she could, such as the LSU chapter of the Institute of Electrical and Electronic Engineers (IEEE), which she served as president during the 1982-1983 semester. She was also invited to join engineering honor society Tau Beta PI and electrical engineering society Eta Kappa Nu.

“You make a lot of friendships and relationships in those groups and in study groups,” she said.

When it came time for Byrd to find a job before graduating, she and her friend signed up for as many interviews as they could when company recruiters would visit the college. Byrd favored power and control elements of electrical engineering rather than electronics and hoped to work for a company like General Electric. Just seven months before graduating, she received a job offer from Shell Oil.

When Byrd graduated from LSU with her EE degree in 1983, she was only one of three female students.

She started off as a maintenance engineer with Shell Pipeline in New Orleans, where she was responsible for all of the electrical systems associated with pumping and metering stations in the Southeast region. She continued in this position until 1988, when she took on another important role—mother. Things would change, but all for the better.

“I traveled a lot with Shell Pipeline, so it was really difficult to have a young child and travel,” she said. “So, they moved me to Norco Refinery, which was great even though it was a longer commute. However, they had a big explosion in 1988, and I ended up working crazy hours and weekends. It was grueling; so, I decided to stay home and raise my daughter.”

Byrd stayed home to raise her daughter for two and a half years, at which time she also had another daughter. It wasn’t long before Byrd saw an opportunity to start working again. At the time, she was living in Slidell, where NASA had a computer complex that was looking for an electrical engineer.

“I wasn’t thinking about going back to work full time, but this was an opportunity I couldn’t pass up,” she said. “The facility was in walking distance of my house. So that’s how I got into NASA, through working for a facility contractor.”

Byrd stayed with the contractor from 1991 to 1994, until the facility started to close. She then applied for a job at Stennis through its facility contractor, Johnson Controls at the time, and landed the role of maintenance engineer. She was promoted to maintenance engineering supervisor in 1998, a title she held until 1999, when she officially joined NASA in the same capacity.

Just a few years later, in 2003, Byrd was promoted to program manager for NASA’s Space Shuttle Service Life Extension Program, a position she held for one year before becoming deputy chief of the Operations and Maintenance Division of the Propulsion Test Directorate for six years.

In 2010, she took a job as a contracting officer’s representative (COR) for NASA’s facility contract, which was NASA’s largest contract at Stennis Space Center. A few years later, Byrd was selected as the deputy director for the Center Operations Directorate. In late 2018, she landed her first executive position as the director of the Center Operations Directorate and just recently, was named the first female associate director for Stennis Space Center.

“Center Operations is the organization that basically touches all of the services that are provided across the center, physical security, environmental services, logistics,  information technology, operations, and maintenance, etc.,” Byrd said.

The job is anything but menial. NASA is a federal city with more than 5,000 employees on the nearly 14,000-acre Stennis “fee area,” which is surrounded by an additional 125,000-acre acoustical buffer zone. Stennis itself has an $877-million global impact, with more than $650 million of that impacting local Mississippi and Louisiana communities near Stennis.

“It’s an exceptional benefit for Louisiana, as well, since nearly 30 percent of Stennis employees live in the ‘Bayou State,’” Byrd said. “Many people don’t realize just how close we are to Louisiana.”

Having worked for Stennis for the past 27 years, Byrd has had the opportunity to witness some of NASA’s rocket propulsion tests, such as the Core Stage hot-fire tests in support of the Space Launch System that took place in January and March.

“I’ve been fortunate enough to be part of the Space Shuttle program,” she said. “They’ve tested the shuttle’s main engines at Stennis since 1975. In 2004, I witnessed the one-millionth second of shuttle engine testing. Then in 2006, I saw the last shuttle engine test. I have also supported the RS-68 program. The RS-68 is an Aerojet Rocketdyne engine that provides main propulsion on United Launch Alliance’s Delta IV rocket, which is used primarily by the U.S. Department of Defense.”

In 2011, Byrd was able to watch the last shuttle launch, a bittersweet memory that will shortly be replaced with the upcoming Artemis missions, the first of which is set to take place in late 2021.

“I hope I get to see the first Artemis launch,” she said. “Artemis III will have the first female astronaut to step foot on the moon. Artemis is actually Apollo’s twin sister in Greek mythology, which I don’t think many people know.”

Byrd’s enthusiasm for females in engineering extends beyond her work to students that she advises to go online and learn about internships through NASA’s Pathways Program and NASA’s STEM Engagement Internship Program. Both offer students the opportunity to work and explore careers while still in school.

“Internship programs allows students to get so much experience and knowledge that it positions them better for a longtime career with NASA when they graduate,” she said. “NASA is very committed to equal opportunity, where people are treated fairly and acknowledged for their hard work, regardless of their race, gender, age, national origin, etc. Also, about a year ago, NASA launched the Unity Campaign to drive NASA organizations to work more effectively together and improve relationships. While I’ve always felt like I’ve worked with family, this program has just solidified that and made it stronger.”

As for her favorite part about working for Stennis, Byrd says it’s the people.

“I love the fact that you really are recognized for your hard work,” she said. “I like the expression ‘Bleeding NASA Blue,’ but I do still bleed purple and gold.”