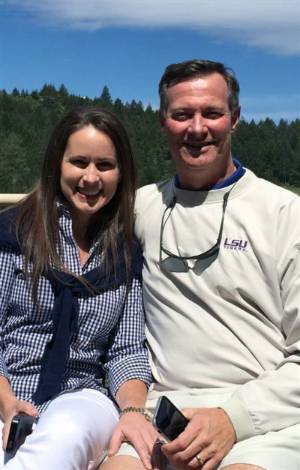 Gary and Dakin Dubroc recently gave a gift to advance the college’s priorities and benefit students. After growing up in rural Louisiana and being the first person in his family to earn a college degree, Dubroc knows how much this means to hard-working students. While in grade school, his teachers set the expectation for him to attend college. Later, Dubroc worked two jobs to put himself through LSU, where he learned the engineering and real-life lessons that would help him succeed.

“There is something about LSU that is more than just a technical-type degree,” Dubroc said. “The instructors…taught us how to be self-starters and allowed us to develop those skills to get into management.”

After graduating from LSU, Dubroc worked in Oklahoma before returning to Louisiana to work on a super-collider project. He then attended Tulane, where he earned his MBA and currently serves on an energy advisory board. During his career, Dubroc moved from operations in a public company to being a CEO in private equity. He currently buys, sells, and manages several businesses at a time and serves on several corporate boards. His work reaches into fields like testing services, oil and gas services, private equity, military and aerospace electronics, and more.

Through contact with the LSU Foundation, the Dubrocs expressed a desire to support students through their giving. In 2017, they established the “Gary and Dakin Dubroc Scholarship Endowment in Engineering.” In 2020, they decided to increase the endowment in their estate plans. This scholarship will now benefit many more students for generations to come. Scholarships are one of the fundraising priorities for LSU and the LSU College of Engineering, enabling high-achieving students to come to LSU to earn a world-class education.

The Dubrocs see their scholarship as having an impact on entire families for future generations, just like it has for Gary.

Like many LSU alumni, Dubroc’s connection to LSU remained strong after graduation through his love of athletics. Even though the 1990s were a tough decade for the Tigers’ football team, his support never wavered, and as the years continued, Dubroc’s love for LSU sports grew. Several years ago, the couple established the “Gary and Dakin Dubroc Athletic Scholarship” through the Tiger Athletic Foundation. Future student athletes will have greater opportunities to succeed because of this gift.

As a student at LSU, Dubroc made sure to be in Tiger Stadium on Saturday nights.

The Dubrocs hope their gift encourages students to always pay it forward and give back when they become graduates.

These academic and athletic scholarships serve as victories for not just engineering students and student athletes, but LSU and Louisiana as a whole.

“This is our way to try and better the state, not just LSU,” Dubroc said.

LSU students, long into the future, will have new opportunities because of these transformative scholarship gifts.