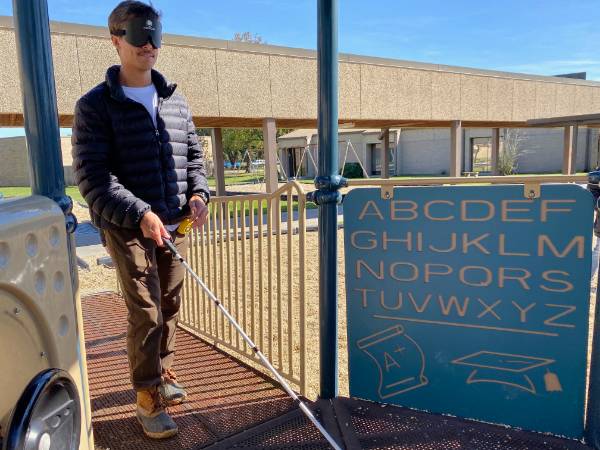 BATON ROUGE, LA – For most children with visual impairments, scoping out a new playground entails having a parent or teacher lead them around while they memorize where the equipment is. Not only does this cut into playtime, but it can also lessen a child’s independence. This is why a group of LSU Biological Engineering students teamed with faculty and staff at the Louisiana School for the Visually Impaired (LSVI) in Baton Rouge to design a tactile map for students there to learn the lay of the land on their own and have more time to play.

The concept started with LSU BE student Brandon Tramontana of Monroe, La., who was interested in ways to make playgrounds more universally accessible for children who are visually impaired and blind, as part of the LSU Community Playground Project Research and Design Team, led by LSU BAE Chair and Professor Marybeth Lima.

Tramontana received an LSU Discover Undergraduate Research Grant for investigative work that involved him and fellow playground team member Madison Ruston, of Baton Rouge, interviewing staff, students, and parents at LSVI and McMain’s Children’s Developmental Center in Baton Rouge about their experiences in play. After conducting a content analysis of these interviews, Tramontana came up with the idea for a tactile map that would allow students to feel the playground layout, since they were unable to visually explore it.

Tramontana graduated in the same semester in which he completed this research, so the project was moved into the design phase by a BE senior design team that would try to complete a 3D tactile map at an LSVI playground in two semesters. This team included LSU BE students Kenzie Dupont of Saint Martinville, La.; Gracie Kennard of Denham Springs, La.; Tiffany Le of Baton Rouge; Cameron Matherne of Saint Amant, La.; Fischer Robinson of Houston; and Thomas Tran of New Orleans; as well as LSVI faculty and staff Stacy Cox, LaRonda Doakes, Blanche Faulk, Jennifer Gaudet, and Anna Gayle of Baton Rouge. 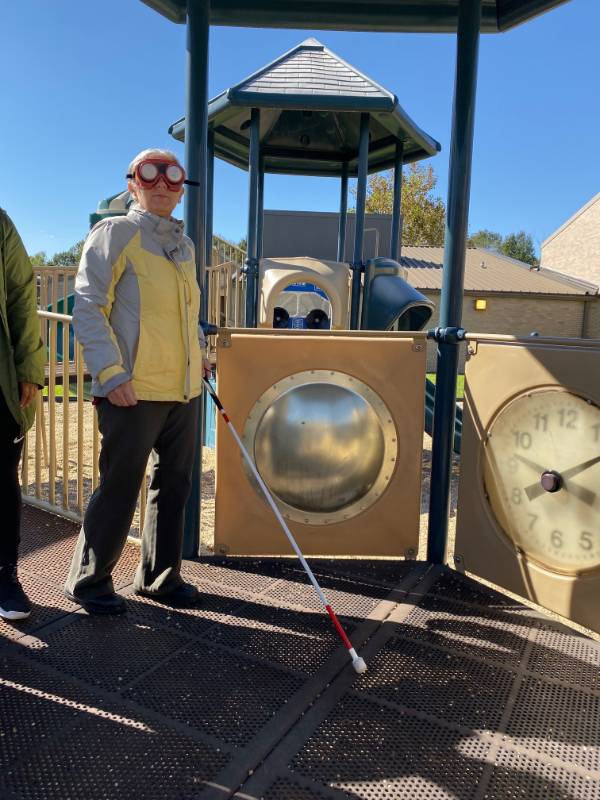 Determined to design the best map possible, the LSU BE students blindfolded themselves and used canes on the LSVI playground to try and understand what life is like for a visually-impaired or blind child.

“The LSVI staff allowed us to use some of their goggles that simulated several different levels of visual impairments,” Robinson said. “As I moved throughout the playground, I began to understand the importance of textures. I could tell what part of the playground I was on based on the way the cane felt as it glided along the ground. This idea played an important part in the design of the map.”

One of the key components for the map design was using different colors and textures to signify different playground components, as was suggested by LSVI staff. Since some LSVI students are able to distinguish between contrasting colors, the team used bold colors to label the slide (red), play surfaces (yellow), and protective surfacing (black). They also used different textures to represent various sections, such as smooth (slides), raised semi-spheres (gravel/protective surfacing), and circular indentations (play surfaces). Auditory components were added to the map to facilitate better understanding of the activities on the playground.

Blanche Faulk, the O&M and Outreach Coordinator for LSVI, said the BE students had to figure out which height and angle worked best for the map (these dimensions were tested by LSVI students and staff), and they even put the map in an enclosed, chargeable box.

“The BE students were wonderful to work with and asked amazing questions,” Faulk said. “They really went out of their way to be able to understand the project. Our students love the map and think it’s cool. They love teaching the new students about it.”

The tactile map was such a hit that another BE senior design team is doing a second iteration design so that a child who is visually impaired can go to any playground with any type of equipment and use that playground with confidence. This LSU BE team consists of Abdullah Alturaifi, Jamekia Colbert, Eva Gatune, Isabelle Maxwell, all of Baton Rouge, and Shane Vallery of Gramercy, La.

Since 2000, Lima has worked with communities on building better playgrounds. When asked what it’s like to see her students’ enjoyment while doing the playground projects, as well as the children’s enjoyment while playing, Lima said, “I don’t know if I can put that into words. When you work together to accomplish a goal and you know it’s something that’s going to serve people in a really critical way for years to come, that was a feeling of pride like I’d never had.

“I always felt that engineering could be a force for good, and I’ve tried to work to make that a reality in a small way. These students are brilliant and achieve amazing things. It’s been a privilege of my career to watch these students come through the door as amazing human beings and embody the best of the human spirit and the best of LSU.”

Her students feel the same about her. 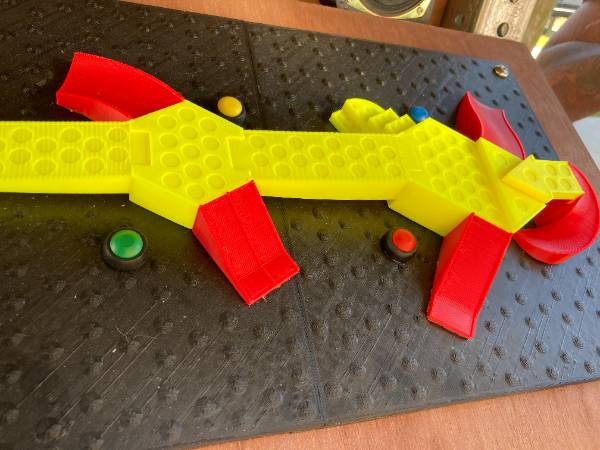 “Dr. Lima is the best, no exaggeration,” Robinson said. “She truly cares about her students, and it really manifests in the energy she brings to work every day, and the way she treats her students and our team. My favorite thing about her is that she has this natural ability to be a mentor. No matter what anyone on the team is going through, big or small, she always has insightful advice and knows how to stay positive. I have thoroughly enjoyed getting to know her over the past four years.”

“Dr. Lima is awe-inspiring,” Tramontana said. “She has worked so hard and made such a difference in the community. It’s really incredible to see.”

As for working with LSVI and the community, Tramontana said the playground project was very impactful for him personally. Not only did he go on to earn his master’s from Duke University in biomedical engineering, he now works for Duke Health designing medical devices.

“I’ve always had this idea that I want to work to improve the conditions of those living with disabilities, and this project inspired me to try and seek out more impactful opportunities within biomedical engineering,” he said. “I like the phrase, ‘It takes a village,’ because with a lot of these designs, it really does. It’s easy to get lost in the design work or trying to meet certain specifications, but you can step back for a second and realize that your design will impact a whole host of different people.”